Chromosomes must segregate equally between daughter cells during cell division, and for proper chromosome segregation, spindle microtubules must attach to a single region of each chromosome, termed the “centromere,” in most eukaryotes. The kinetochore is a complex of proteins that is located at the centromere. Defects in this mechanism leads to chromosome instability (CIN). CIN, unequal distribution of chromosomes to daughter cells results in aneuploidy (i.e., an incorrect number of chromosomes) – the consequences of aneuploidy are usually profound and may include cancer, birth defects, and developmental disorders such as Down syndrome. CIN is a hallmark of cancers, and is often associated with a poor prognosis. Therefore, studying the timing of centromere and kinetochore protein movements and the structure of kinetochores and centromeres is important for understanding CIN and cancer progression. 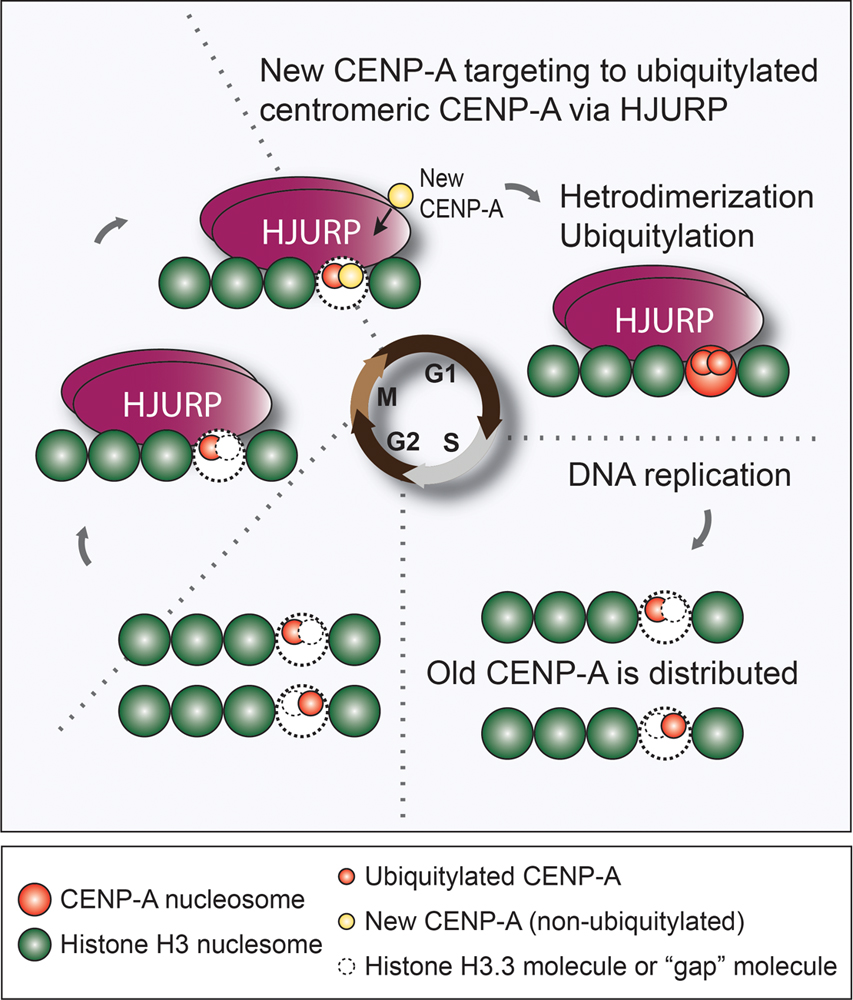 The key question is how the chromosomal location and function of a centromere (i.e., centromere identity) are determined and thus participate in accurate chromosome segregation. In most species, the centromere has no defined DNA sequence but consists of large arrays of repetitive DNA. A functional centromere may form upon non-centromeric DNA regions (i.e., neocentromeres). Therefore, centromeric DNA is not sufficient or necessary to define centromere identity. However, centromere identity in most species relies on the presence of a special nucleosome that contains a specific histone-like protein called CENP-A. CENP-A is proposed to be the non-DNA indicator (epigenetic mark) of centromere identity. How does CENP-A define the position of the centromere in humans? We have reported that the localization of CENP-A in humans requires a specific enzyme and its activity: the enzyme is CUL4A -RBX1-COPS8, and its E3 ligase activity is essential in adding of a ubiquitin group to the amino acid lysine 124 of CENP-A. This addition is referred to as “ubiquitylation.”

Our recent studies suggest a model of inheritance of CENP-A ubiquitylation for the control of CENP-A localization and maintenance at centromeres. In this model, two CENP-A molecules in one nucleosome are split between the two daughter centromere-DNA sequences, and one CENP-A molecule is either replaced with one histone H3.3 molecule or leaves a molecule-free gap during replication/S phase (Fig. 1, S phase). A protein called HJURP, which is a specific chaperon protein of CENP-A, preferentially binds to preassembled “old” CENP-A, which has a ubiquitin group and resides predominantly in nucleosomes (Fig. 1, M phase). Newly made, free CENP-A targets ubiquitylated centromeric CENP-A through its interaction to HJURP (Fig. 1, M-G1 phases). Subsequently, new CENP-A is ubiquitylated near the nucleosome and/or inside the nucleosomes (Fig. 1, M-G1 phases). In this manner, CENP-A ubiquitylation is inherited between rounds of cell division and it determines centromere location (Fig. 1). Our results also showed that expression of too much CENP-A within cells is not sufficient for the formation of a neocentromere at a noncentromeric region, and ubiquitylation of CENP-A is necessary for the formation of neocentromeres and for epigenetic inheritance of the centromere location in humans. In summary, CENP-A ubiquitylation is important for CENP-A to work as the non-DNA indicator of centromere identity.