According to the recent report of The Department of Economic and Social Affairs of the United Nations Secretariat the number of elderly (aged 60 years or over) is expected to increase from 841 million people in 2013 to more than 2 billion in 2050. The global share of older persons increased from 9.2 per cent in 1990 to 11.7 per cent in 2013 and proportion of the world population will reach 21.1 per cent by 2050. 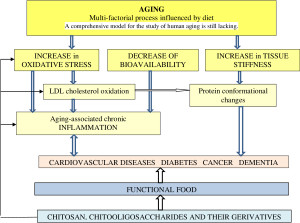 Increased levels of reactive oxygen species (ROS) in elderly people can cause oxidative modifications of lipids, proteins, and DNA and initiate age-associated chronic inflammation. Oxidative stress and inflammation are involved in the pathology of age-related diseases such as cardiovascular diseases, cancer, neurodegenerative diseases, rheumatoid arthritis, and diabetes mellitus (Fig. 1.).

Chitosan is bioactive cationic polysaccharide with antibacterial, antifungal, antioxidant, antidiabetic, anti-inflammatory, anticancer, and hypocholesterolemic properties. Chitosan is used in biomedical and food applications. This review paper focuses on the ability of chitosan and especially chitosan oligosaccharides (COS) to prevent age-related dysfunctions.

The potential of chitosan, chitooligosaccharides and their derivatives in prevention and treatment of age-related dysfunctions was discussed in this paper. The influence of oxidative stress, low density lipoprotein oxidation, increase of tissue stiffness, protein conformational changes, aging-associated chronic inflammation and their pathobiological significance have been considered. The chitosan-based functional food also was reviewed.

It is important to protect the cells from oxidative damage by ROS and related changes in protein conformations and inflammation. The herbal polysaccharides with antioxidant and anti-inflammatory properties, such as resveratrol, curcumin, green tea polyphenols, are also able to inhibit protein aggregation and to prevent associated age-related diseases, but they are very sensitive to the harsh acidic environment of the stomach and intestinal tract and their bioavailability can be essentially improved by chitosan nanocoatings.

Chitosan and COS due to their antioxidant, anti-inflammatory, antidiabetic, and anticancer properties show promising potential to be used in prevention, delay, mitigation and treatment of age-related dysfunctions and diseases. Hypocholesterolemic properties of chitosan decrease the risk of atherosclerosis and other cardiovascular dysfunctions common in elderly population. Chitosan ability to decrease serum total-cholesterol and LDL cholesterol levels, as well as to prevent their oxidation, changes water molecules distribution at biointerfaces and influences the conformation of proteins. So, chitosan has the potential to prevent protein conformational diseases that are also related with advanced aging. Mucoadhesive properties of chitosan can be applied in nanomedicine with potential to improve effectiveness of nutraceuticals and drug delivery systems. Combination of chitosan and COS with natural antioxidant polyphenols is promising. COS suppress nuclear factor NF-κB activation and translocation of NF-κB from cytoplasm to nucleus that has been linked with a number of age-related diseases.

Development of novel COS derivatives such as sulfated, carboxylated and phenolic acid conjugated COS and their application in novel nanoparticulated systems, functional foods, and nutraceuticals can essentially increase bioavailability and stability of bioactive components. Mucoadhesive films containing chitosan-coated nanoparticles can find novel applications in nanomedicine. Breakthrough results in delay and prevention of age-related dysfunctions can be expected in the future.

The potential of chitosan and its derivatives in prevention and treatment of age-related diseases.
Kerch G.
Mar Drugs. 2015 Apr 13