The push and pull of childbirth

The pregnant uterus is a muscular organ that holds the baby, placenta and amniotic fluid. The uterus rarely contracts in early pregnancy, but in late pregnancy, Braxton-Hicks contractions begin.  These contractions feel similar to those of true labor, but do not cause delivery of the baby. True labor requires strong uterine contractions that force the cervix fully open and allows the mom to push the baby out. Two important questions are, exactly how does the uterus transition into labor, and how can we control it? 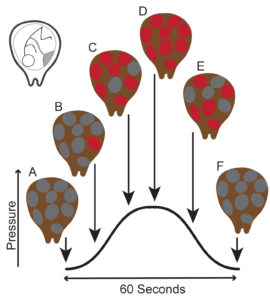 The uterus is a hollow, muscular organ that houses the fetus, placenta and amniotic fluid. The surface of the uterus is composed of regions that are inactive (grey) before and after each uterine contraction (A and F). When one region activates (B, red), pressure rises slightly. The increased pressure then recruits other regions into the contraction in a positive feedback mechanism (C and D). As each region relaxes, the pressure falls (E).

Many feel that the laboring uterus works like the heart. The heart and uterus are made of muscle, and both create pressure by contracting. The heart has a fixed pacemaker, which generates electrical impulses that travel along dedicated pathways for long distances. These impulses rapidly encompass the heart, and coordinate the activity of the whole organ. This precise mechanism creates the efficiency necessary to push blood throughout the body.  However, the uterus does not seem to have a fixed pacemaker or specific electrical pathways. Additionally, electrical impulses die out before they can encompass the entire uterus.

Summarizing 50 years of research, the heart and uterus seem to use the same electrical mechanism to communicate over short distances, but different mechanisms for long distance signaling. A few alternate mechanisms have been proposed to explain how the uterus signals long distances, but none withstood detailed testing. Without an alternative, most believed that electrical activity was the only mechanism capable of creating and coordinating the contractions of labor.

However, there was one mechanism for long distance signaling that was not fully tested – “mechanotransduction” (i.e. mechanical forces causing a contraction). It is well-known that when uterine tissue is stretched, the tissue often contracts. Other times, the stretched tissue simply elongates without contracting. Previously this phenomenon was considered interesting, but not relevant to human labor.

The unique physiology proposed in the dual model is that a regional contraction not only pulls on neighboring regions, it also raises intrauterine pressure. This allows the uterus to signal through a mechanism similar to the automobile hydraulic braking system. Pushing on the brake pedal raises hydraulic pressure throughout the system, which then activates multiple brake pads at the same time. Additionally, the brakes activate rapidly, despite the fact that they are located a considerable distance from the pedal and from each other.

In the uterus, contraction of one region raises intrauterine pressure slightly, which then increases the tension on all the other regions of the uterus, regardless of physical location. If another region contracts in response to the increased tension, intrauterine pressure rises again, further increasing tension on the remaining regions. The positive feedback of pressure, tension, mechanotransduction quickly causes contractions of all regions at the same time. Because this synchronization is necessary for true labor, the dual model predicts the transition from Braxton-Hicks to labor contractions occurs when mechanotransduction becomes operational in late pregnancy.

If the dual model withstands further testing, there are important new applications.  By measuring uterine synchronization, clinicians may soon be able to more fully evaluate women in preterm labor, or abnormal term labor.  A precise clinical evaluation is not only a better way to apply known therapies, but is also a prerequisite for developing new ones.