The Figure of 8 Walk (F8W) test looks at walking in straight and curved paths in both clockwise and anti-clockwise directions (Fig. 1). The time taken to carry out the test is recorded along with the number of steps and an accuracy and smoothness score. It is important to look at this to get an accurate measure of a person’s walking in everyday life. The test has been used in the elderly and those with stroke. However, it is not yet known if the test is valid and reliable for use in people who have had a knee replacement. The test has also never been used out in the community in people’s homes where conditions are likely to differ from clinics that are brightly lit and have large areas of smooth floors. 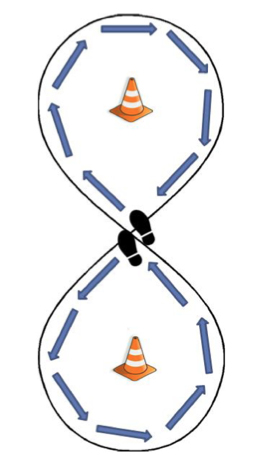 The study aimed to see if the F8W test was a valid and reliable measure for older people following knee replacement in community settings. Seventy-four people over the age of 55 took part. Half of the participants completed the test in their homes and half completed it in a physiotherapy clinic. The F8W test was completed and the time taken to complete was recorded along with number of steps and a measure for accuracy to state whether the patient stood outside of the 0.6m boundary for the test and a measure of smoothness to state whether the participant kept the same pace. Alongside this, two other measures of walking called the Timed Up and Go (TUG) and the Timed Walk Test (TWT) were carried out at the first assessment. The participants were then tested a second time a week later by two different therapists to see if they recorded similar times as a measure of reliability.

These results confirm that there is good validity and reliability for the F8W test in a clinical setting but also in patients’ homes following knee replacement. The F8W also showed minor walking difficulties such as stride length and pace that were not apparent with the TUG and TWT making it a more useful measure of functional performance for this population.

The reliability and validity of the Figure of 8 Walk test in older people with knee replacement: does the setting have an impact?
Barker KL, Batting M, Schlüssel M, Newman M
Physiotherapy. 2019 Mar