Maternal breast milk is the main source of nutrition during early life, which is a critical period for immune development of the child. Breast milk contains bioactive enzymes, hormones, growth factors and immune modulating factors, which are not degraded in the infant gut and therefore have the capacity to regulate the immune system. The beneficial effects of breastfeeding on growth and protection against infections are well known. Besides this, breastfeeding has also been reported to affect the child’s risk of eczema and troublesome lung symptoms.

We recently showed a dual effect of breastfeeding, where increased breastfeeding length increased the risk of eczema in early childhood, but reduced the risk of lung symptoms. We speculated that immune molecules in breast milk could explain such association either through a direct effect or as a surrogate marker of the mother’s immune constitution. 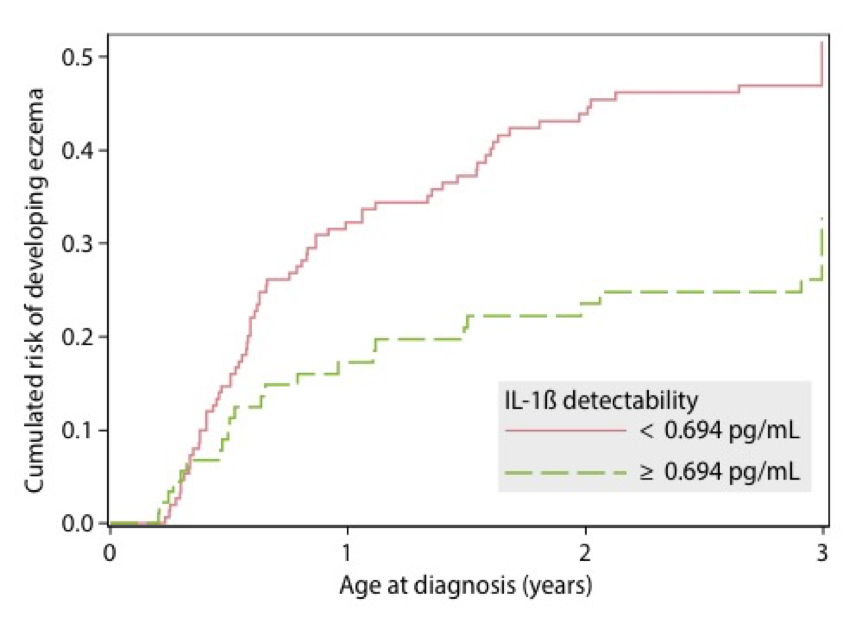 We therefore measured levels of 19 immune molecules in breast milk, which had previously been shown of importance to eczema and asthma. Breast milk samples were collected from 223 mothers from the Danish Copenhagen Prospective Study on Asthma in Childhood2000 (COPSAC) high-risk birth cohort. The COPSAC physicians diagnosed eczema and recurrent wheeze in the children at the age of 0-3 years according to validated algorithms in full clinical follow-up, a particular strength of the study.

Our results showed that increased levels of interleukin 1 beta (IL-1β) – an important mediator of the inflammatory response – in breast milk was associated with more than a 50% reduced risk of developing eczema before age three. Additionally, we showed that IL-1β is part of a protective immune pattern together with other immune mediators, suggesting that they act by reducing the level of microbial pro-inflammatory products during early life to reduce eczema initiation.

We could rule out that the beneficial effect of breast milk IL-1β on eczema development is modulated by the children’s genetic predisposition to eczema, arguing against a heritable trait. In turn, mechanisms associated with genetic risk of eczema do therefore most likely not involve IL-1β in breast milk. In our current analyses, we saw no associations between immune mediators and risk for recurrent wheeze.

The study is conducted in a high-risk cohort where all mothers had a history of asthma, which therefore limits generalizability of our findings. However, the protective effect of breastfeeding on asthma, allergy and eczema development has primarily been shown in high-risk settings where it also seems most relevant.

Noticeably, our findings based on complex, multivariable data analyses suggest that it may not be an effect of a single immune mediator underlying the possible protective mechanism of breastfeeding in high-risk families. Rather, maternal immune health represented by a composite pattern of the breast milks immune profile likely affects her child´s immune system and thereby its risk of eczema. Hence, the immune regulatory properties of breast milk might include an ability to influence shifts between an eczema-related immune response to a more protective, regulatory type of immune response in the child.