The risks of brain damage after hyperthermia

This article describes the unintended neurological consequences after a period of fever or hyperthermia. A fever may have many causes, including after strenuous exercise, being in a heatwave, taking certain drugs and medications, and various illnesses.

Hyperthermia is a common insult to the central nervous system (CNS). A variety of neurocognitive effects are reported, which may persist after the acute insult. A core temperature of 40C is associated with long-term or permanent neurological damage, consistent with the cellular changes at this temperature. 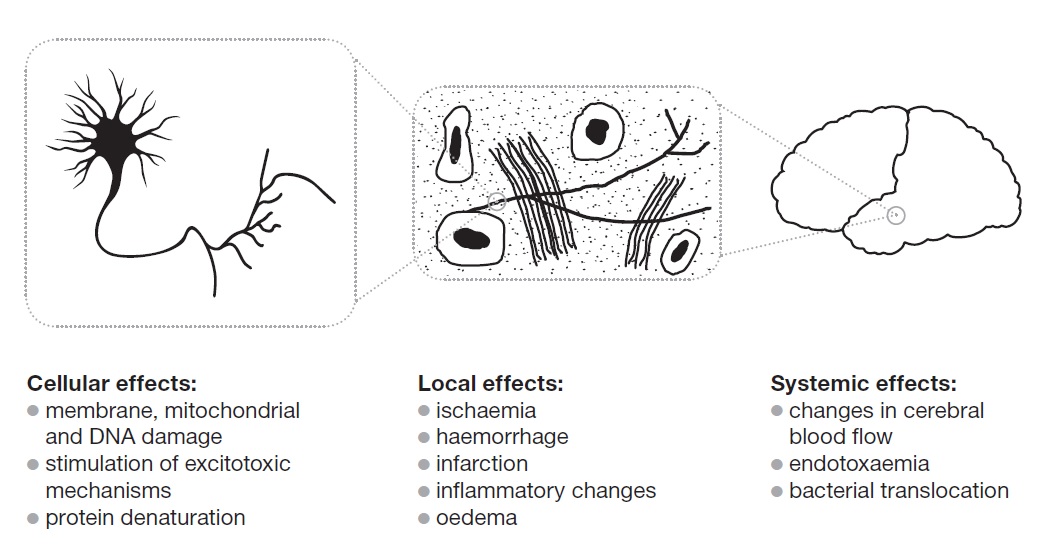 Clinical Patterns
Most patients recover well after a period of hyperthermia, but patients exposed to higher temperatures, for longer periods of time, are more at risk of complications.

Patients who become acutely hyperthermic often display various signs of neurological dysfunction, including agitation, seizures, unsteadiness, or disturbance of consciousness including coma. Neurological dysfunction in heatstroke is well described, and has been recognised since at least Roman times. Cognitive dysfunction also happens quickly and may include impairment to memory, knowledge, attention, reasoning, problem solving and comprehension.  Cognitive impairment may occur after exposure to modest hyperthermia – a core temperature of only 38.8C, and for only one hour, is sufficient to cause cognitive dysfunction.

The outcome may be poor – if patients require admission to an intensive care unit, mortality may approach 65%, and persistent neurological effects may affect 50% of survivors. Dysfunction may be profound; dementia, and persistent vegetative state have been reported. Patients may improve over many weeks, but in some, recovery is minimal. In almost all of these reported cases, a core temperature of 40C or higher is recorded.

Cerebellar dysfunction is the commonest chronic picture, but damage may occur throughout the CNS. Features are usually bilateral.

Fever after brain injury is common, and is associated with a poorer outcome. Mortality after a stroke and trauma increases at temperatures above 38C.

Radiological and pathological findings
Magnetic resonance imaging (MRI) may show a variety of changes, including haemorrhage, ischaemia, encephalitis and atrophic and oedematous changes. Haemorrhage probably represents a poorer prognosis. Lesions may occur throughout the CNS.

In neuropathological studies, cerebellar damage is common, in keeping with the clinical syndrome. Purkinje cells display the most marked thermal damage. Purkinje cells are found predominantly in the cerebellum, and regulate motor function.

Local effects: High temperatures stimulate ischaemic and inflammatory changes, development of oedema, and vascular damage in exposed areas of the brain. The nature and effect of the inflammatory response is unclear.

Systemic effects: Hyperthermia alters cerebral blood flow, and increases the permeability of the blood-brain barrier and gastrointestinal tract, raising the possibility that endotoxaemia or gastrointestinal bacterial translocation is partly responsible for the ensuing inflammatory response and cerebral dysfunction.

Conclusions
The individual’s physiological response, as well as the duration of the hyperthermia, may be important in developing complications. Further work is needed to clarify how genotypic and phenotypic differences predispose an individual to neurological damage. Current treatment is essentially limited to urgent physical cooling. Of interest is the inflammatory response, and bacterial and endotoxin translocation from the gastrointestinal tract, which may provide novel targets for future treatments to minimise complications from hyperthermia.