The vicious cycle in liver that fuels the obesity diabetes pandemic

Experimental obesity is readily produced by dietary excesses of fats or carbohydrates and involves an initial increase in glucose production by the liver with subsequent increases in blood insulin levels, i.e., an insulin-resistant state. In turn, elevated blood insulin stimulates liver to produce fats, aka “lipids”, which accumulate first in liver as non-alcoholic “fatty liver”, second in the blood stream as triglycerides and cholesterol that incite cardiovascular problems, and finally in fat depots, particularly abdominal, to produce a characteristic “paunch”. Along with fat, liver production of other deleterious factors increases, impairments in glucose metabolism in muscle ensue, and insulin resistance worsens. The same vicious cycle occurs in humans, and, unchecked, can trigger maturity-onset (type 2) diabetes mellitus, which afflicts 1 in 4 people over the age of 40. 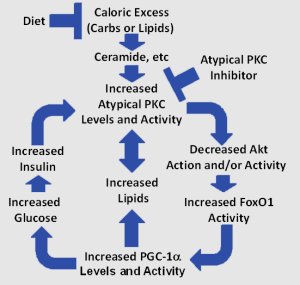 In a series of papers, a research team headed by Dr. Robert Farese at the Tampa VA Hospital and the University of South Florida showed in experimental obesity models that insulin resistance is critically dependent on, most likely initiated by, an increase in the activity of a specific liver protein, an enzyme known as atypical protein kinase C or, for short, “aPKC”, which, as a “kinase” enzyme, adds highly reactive phosphate groups onto other protein enzymes to change their function. The Tampa group also found that the aPKC enzyme in liver is “promiscuous”, and is excessively activated, both by lipids derived from dietary sources, as well as lipids increased by insulin. And, unfortunately, the excessive activation of aPKC in diet-produced obesity leads to decreased action and activity of another enzyme used by insulin to diminish glucose production by the liver. This latter enzyme is called protein kinase B or “Akt”, which is well-known to diminish liver glucose production by regulating a series of enzymes, including, “FoxO1” and “PGC-1alpha”, that are overactive in livers of obese and type 2 diabetic humans.

As recently reported in the Harvard-based journal, Metabolism, the Tampa group examined livers, randomly obtained from deceased older rejected human transplant donors, and found that, the higher the body mass index (aka, “BMI”, which relates weight to height and serves as measure of obesity) of the individual, the greater the amount and activity of the aPKC enzyme in liver, thus, the greater the alterations in Akt, FoxO1 and PGC-1alpha, and the greater the increases in enzymes that produce glucose and lipids. Indeed, all of these liver enzyme abnormalities in obese humans rose along with increasing BMI to reach levels approaching those seen in type 2 diabetes. Most importantly, and fortunately, all enzyme abnormalities in type 2 diabetic liver cells were reversed by treatment with newly developed agents that specifically target and diminish activity of the aPKC enzyme. This widespread correction of all abnormalities in the cycle is unique to aPKC inhibitors and is not seen with currently-used anti-diabetic agents.

In addition to use in isolated liver cells, the Tampa group has used chemical inhibitors of aPKC to treat several mouse models of insulin resistance with associated obesity and early type 2 diabetes. In agreement with findings in isolated liver cells, the most promising aPKC inhibitor, when used in obese-diabetic mice, selectively inhibited aPKC in liver and largely reversed all liver enzyme abnormalities, thereby correcting, or preventing development of, obesity, lipid accumulation in liver and blood, and increases in blood glucose levels. Although there were no adverse effects of this aPKC inhibitor in mouse studies conducted over 2-3 months, the hope is that this, or other chemically-related aPKC inhibitors currently under development, will continue to be safe in future more prolonged studies, and will eventually prove to be useful, either directly or indirectly as models, for treating humans with obesity and type 2 diabetes.