Thyroid eye disease (TED) is an uncommon condition that affects some people with an overactive thyroid (a condition called Graves’ disease, of whom about a quarter will develop TED). The disease causes swelling of the tissues behind the eye and as a result the eyeballs are pushed forward and appear bulging (see the figure). Besides being disfiguring, TED often causes troublesome symptoms like pain, discomfort, double vision and occasionally it can cause blindness. TED is a disease that is caused by the immune system. Whereas normally the immune system protects us from bugs like bacteria and viruses, sometimes it turns against our own organs and can cause damage. This is what is believed by experts to happen in TED. Another important factor that makes TED worse is smoking. 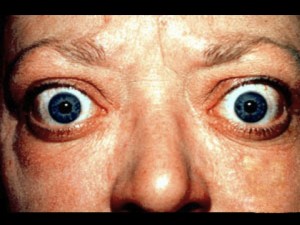 TED affects the quality of life of sufferers and their personal, social and professional life. If TED is diagnosed very soon after the symptoms appear, there are simple, effective and safe treatments (like selenium supplements) that can improve it and prevent it getting worse. Unfortunately it is often difficult for doctors to make a diagnosis and delays in treatment are common. In 2009 a group of 84 national and international professional and patient-led organisations who deal with TED got together to sign the Amsterdam Declaration for people with TED. Among the pledges that were made was earlier diagnosis and treatment of TED. A year later, TEAMeD (Thyroid Eye Disease Amsterdam Declaration Implementation group) was formed in the UK by a group of eye and thyroid experts and patient representatives, aiming to improve the care of people with TED in the UK (http://www.btf-thyroid.org/projects/teamed). TEAMeD has published this guideline for doctors and other health professionals who may encounter patients with undiagnosed TED. It recommends the use of a simple questionnaire and examination tool that doctors can use, which helps them spot patients with TED among those with an overactive thyroid. The guideline is also aimed at doctors who see patients with TED after the diagnosis is made and provides advice about treatment and referral to specialized centres.  The guideline draws attention to an online aid aimed at TED patients who are smokers, and may be helped by finding out more about how and why smoking has this effect and how quitting affects TED. The authors strongly believe that patient empowerment is important and recommend the use of an “early warning card” which can help patients with Graves’ disease spot the early symptoms of TED and draw attention to their doctor.