Too hard to defeat Devils

Hematopoietic cell transplantation (HCT) offers potentially curative therapy for patients with myelodysplastic syndromes (MDS) or acute myeloid leukemia (AML). However, relapse following HCT is considerable and becomes a major cause of failure in patients with MDS and AML. The relapse rate after HCT is 40-50% for patients in the high-risk group. As a consequence, the 3-year survival rate is often under 30% in the group. Current therapeutic interventions for post-transplant relapse include withdrawal of immunosuppression, administration of chemotherapy, donor lymphocyte infusion (DLI), and second stem cell transplantation. Regardless of the type of intervention, outcome after post-transplant relapse has remained dismal. An analysis of results at our center showed two-year overall survival rates of 3% for patients who relapsed <100 days following HCT. 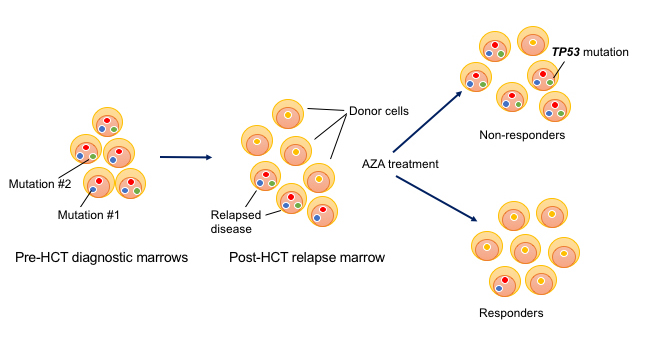 Azacitidine as hypomethylating agent is currently approved for the treatment of MDS and AML. We recently reported the results of a prospective phase II trial of azacitidine in patients with MDS or AML with persistent disease or early relapse after HCT. At 6 months after relapse, 30% of patients had responded to azacitidine. This result showed efficacy of azacitidine in controlling disease progression in patients with MDS or AML who relapse after HCT.  While these responses were encouraging, the study revealed progressive evolution of cytogenetic abnormalities throughout the course of the disease, from diagnosis to post-transplant relapse. To better define the biology of relapse and the response to azacitidine treatment, we analyzed the mutational profile of paired bone marrow samples obtained at pre-HCT diagnosis, post-HCT relapse, and during subsequent azacitidine treatment. The goal was to identify mutational patterns associated with post-HCT relapse, response to azacitidine and post-relapse survival.

The most commonly mutated genes at the time of relapse included TP53 (48%), TET2 (33%) and DNMT3A (14%). These mutations persisted through the course of HCT from pre-HCT to post-HCT relapse. Mutational profiles in relapsed disease after HCT corresponded to those found to be associated with unfavorable prognosis in previous studies, measuring mutations in pre-HCT samples. These findings indicate that clones containing certain mutations, e.g., in TP53, survive chemotherapy and the allogeneic effect mediated by donor cells, and prevail through clonal selection and expansion during disease progression and relapse. Mutations in TP53 were significantly associated with poor responsiveness to azacitidine (OR 3.08, 95% CI 1.1–9.0, p=0.04) and inferior survival (HR 3.04, 95% CI 1.3–5.8, p=0.02). Most mutations in TP53 occurred in the DNA binding domain, a critical region for p53 function.

To characterize clonal changes in individual patients during azacitidine therapy, we examined paired marrow samples. We asked whether the burden of each mutated gene, by measuring variant allele frequency (VAF), changed during the course of treatment, and if such changes correlated with clinical responses. Relative VAFs of the mutations in TP53 remained unchanged over the course of treatment, suggesting that clones with TP53 mutations were refractory to azacitidine, consistent with the unfavorable prognosis of patients with TP53 mutations. This mutation profile also implies molecular evolution at the clonal level that may account for the significantly inferior outcomes in patients with TP53 mutation in relapse (Fig. 1). In patients who did not respond to azacitidine, most mutations persisted, mirroring clinical outcomes. Such a pattern would imply an underlying genetic mechanism of resistance to azacitidine via persistence of pre-existing resistant clones (such as clones with mutation in TP53). In contrast, bone marrow from patients whose disease responded to azacitidine exhibited complete loss of clones as identified by disappearance of mutations. These data support the concept that mutational profiles mirror clinical responses to azacitidine, and that mutations in TP53 are significantly associated with unfavorable outcomes, regardless of treatment.