Approximately 20,000 traumatic spinal cord injuries (SCIs) occur each year in the United States. These injuries are often associated with paralysis and other permanent disabilities. SCI is now recognized to occur in two phases, described as primary and secondary injury. Primary injury is a result of harmful forces disrupting the physical and/or functional integrity of the spinal cord, whereas secondary injury involves delayed and progressive insult from deleterious molecular processes that continue long after the primary injury. Extensive research has sought novel pharmacologic treatments for secondary SCI. Most of the treatments investigated thus far are aimed at improving blood and nutrient supply to injured tissue, decreasing inflammation, reducing cellular damage and augmenting regenerative processes. 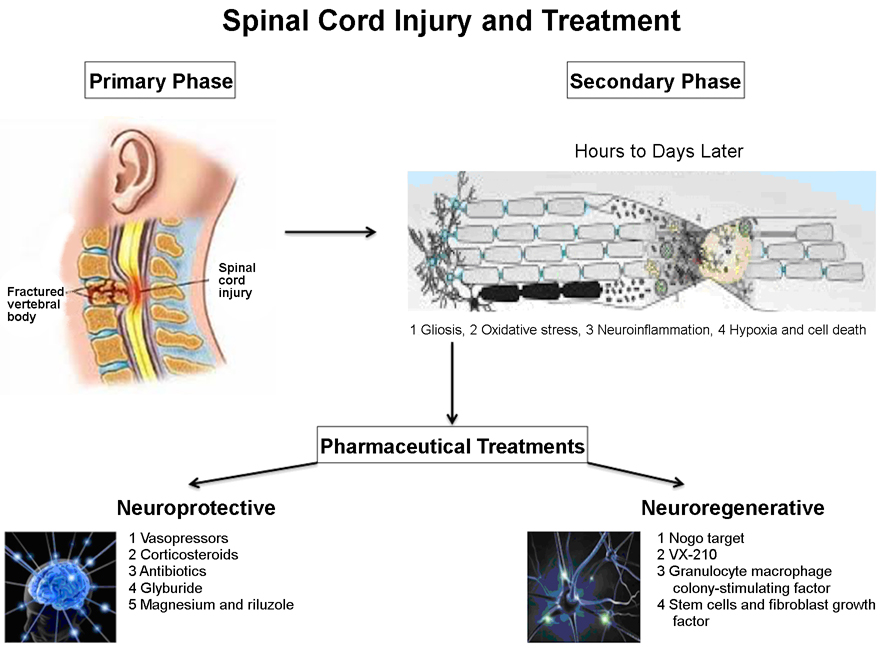 Fig. 1. An overview of the pathological molecular mechanism for spinal cord injury is shown including primary and secondary injury phases. Pharmacological treatments are divided into neuroprotective and neuroregenerative strategies.

The pharmaceutical treatments that are currently under investigation can be broadly grouped into two categories: 1) neuroprotective agents that aim to preserve existing cellular elements and 2) neuroregenerative agents that improve healing, nerve re-growth, and function. Many agents have already been investigated in human clinical trials, but we have yet to translate a markedly effective and safe therapy for SCI. Nevertheless, the failed studies provide important lessons for future trials, including timing of therapeutic administration, duration of treatment, and measured outcomes of clinical significance.

Pharmacologic strategies that aim to achieve neuroprotection after SCI have targeted various mechanisms. For example, evidence indicates that maintaining mean arterial blood pressure >85 mmHg augments nutrient delivery to the injured spinal cord. Achieving this goal frequently requires vasoactive agents, such as norepinephrine, dopamine, dobutamine, epinephrine, and phenylephrine. The effects of anti-inflammatory agents have also been evaluated. Despite the completion of several large, high-quality clinical studies, clinical use of the anti-inflammatory agent methylprednisolone has proven very controversial. Similarly, antibiotics such as minocycline hold promise by decreasing inflammation and oxidative stress after injury. Preclinical evidence suggests that glyburide (a medication used for diabetes) can also prevent tissue swelling and inflammation after injury. Another drug target is excitotoxicity, which results from an excess of excitatory neurotransmitters. Agents such as magnesium and riluzole are being investigated for their roles in limiting this secondary injury pathomechanism.

Neuroregenerative agents have also been evaluated for their potential to augment regeneration of the spinal cord after injury. Classic experiments led to the recognition that molecules on myelin and extracellular matrix in the central nervous system strongly inhibit axonal regeneration after injury. Preclinical studies have shown that antagonism of the important inhibitory Nogo receptor aids axonal re-growth after SCI. Another downstream molecule that regulates axonal re-growth is the guanosine triphosphatase Rho, which has been targeted by the compound VX-210. Granulocyte macrophage colony-stimulating factor and fibroblast growth factor have also been shown to augment the supportive nature of the extracellular matrix in preclinical studies and are now advancing to clinical trials. Finally, investigation of the use of cellular transplantation, which is sometimes coadministered with growth factors or other substances to promote healing, is gaining momentum as scientists have discovered ways to reprogram cells to less differentiated fates. This may allow the transplantation of autologous cells, which do not require immunosuppression.

SCI remains a devastating health problem that lacks effective treatments. As scientific discovery has improved our understanding of the secondary phase of injury, the opportunity for new therapeutic strategies has emerged. For effective translation to humans, the next wave of research will need to focus on determining the effective concentration, mechanism, timing, and delivery of promising therapeutics. Rigorously designed clinical trials will be imperative, and they will require multiple cooperating centers to achieve needed enrollment.