Acrylamide is a chemical contaminant naturally formed during thermal processing and cooking food as a consequence of the Maillard reaction, derived from the reaction between the free amino acid asparagine with reducing sugars or other carbonyl compounds. According to the European Food Safety Agency (EFSA), processed potatoes together with coffee and cereal based food are the main sources of exposure to acrylamide in the diet. Due to the natural presence of large concentration of acrylamide precursors in the potato, when this product is subjected to high temperatures, as during frying, acrylamide is generated. Acrylamide has been classified as a potential carcinogen in humans and recently the European Food Safety Agency has confirmed that the presence of acrylamide in food is a public health concern. Therefore mitigation strategies and technological mechanisms are being developed at industrial level in order to reduce acrylamide formation in processed potatoes and, consequently, reduce acrylamide exposure through the consumption of these foods. 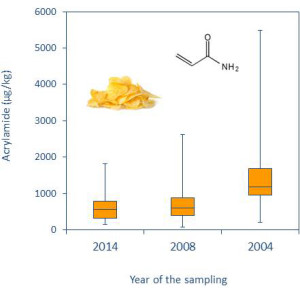 It is known that dietary habits have changed over the last few years, increasing the consumption of processed foods and decreasing this of natural foods. Such dietary changes are particularly evident in younger generations whose habits are associated with high levels of snacking and fast food consumption, which contributes to high levels of acrylamide intake. Among snacks foods, potato chips are one of the most popular foodstuffs and large quantities are consumed worldwide, especially by young people. French fries and potato chips may contribute 56% of the total acrylamide intake in the Western diet of the adolescents. Due to this fact, recent researches have been focused on different aspects affecting acrylamide formation in fried potato products and possible mitigation strategies, which could be summarized in two approaches: (1) to control acrylamide precursors in the fresh product and, (2) to control the thermal treatment conditions applied during processing. Authorities and producers have invested great efforts in mitigating acrylamide formation and reducing acrylamide concentration in processed potatoes. In this respect, reductions in the acrylamide content in potato chips/crisps as compared with previous results have been reported by several authors.

Researchers from the Chemical Modifications in Processed Food –CHEMPROFOOD group at the Institute of Food Science, Technology and Nutrition (ICTAN-CSIC) have confirmed that acrylamide levels in potato chips from Spanish market have progressively decreased during the last decade. The reduction takes place not only on the average, which have decreased from 1484 µg/kg in 2004 to 740 µg/kg in 2009 and 630 µg/kg in 2014, but also on the maximum values. The trend is satisfactory for the snack food industry since the implementation of mitigation strategies is being effective. However there are still two point of concern; unjustifiably high levels that can be combated with proper selection of raw materials and settings frying operations, and high variability among lots for certain brands.

In summary, although acrylamide levels in potato chips have decreased over the last few years, it is necessary to continue efforts to reduce this content and, consequently, the acrylamide exposure from the consumption of this kind of food.