Ultra Quick sample preparation prior to GC-MS based metabolomics

Metabolomics is a comprehensive study of low molecular weight compounds in biological samples and has been applied to wide range of research areas from medical to food analysis. For the analysis of metabolites, gas chromatography-mass spectrometry (GC/MS) has been frequently used due to its availability, reproducibility, and well-studied database. Since most metabolites are hydrophilic and low-molecular weight, extraction, dehydration, and derivatization of polar functional groups are normally required. These steps are usually performed in solution or by freeze drying. However, these three steps make sample preparation prior to GC/MS analysis laborious and time-consuming. 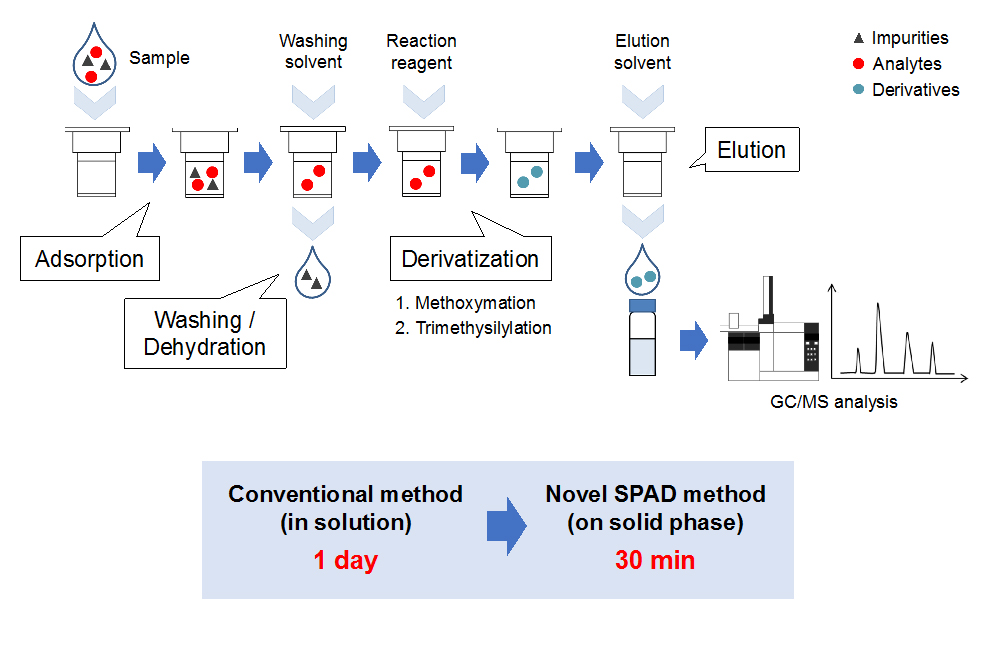 In our study, we introduced novel approach, solid phase analytical derivatization (SPAD), to achieve faster and easier sample preparation of GC/MS based metabolomics. SPAD is an approach to reduce the complexity of experimental steps by simultaneously performing extraction and derivatization on same solid phase (Fig. 1). Since SPAD has many advantage such as high selectivity, low organic solvent consumption, and automation with any chromatographic system, SPAD has been applied to sample preparation of various compounds. However, SPAD and metabolomics have opposite aims in the coverage of the analytes. In contrast to high selectivity of SPAD, metabolomics aims comprehensive analysis of metabolites including organic acids, amino acids, and amines.

12 amino acids, 6 organic acids, and 3 amines were selected as test analytes and each step of the SPAD procedure were optimized. As a result, all target analytes were successfully derivatized and detected in GC/MS. Moreover, the effect of co-existing substance was investigated. Although coexisting saccharides in the sample did not affect to the analytes desorption or derivatization, coexisting sodium chloride significantly interfere and decrease the peak intensities of all analytes. Dilution of the sample solution settled this problem and our results newly showed superiority of SPAD for much-sugar containing metabolomics samples, e.g. fruits. Finally, the SPAD method was successfully applied to human plasma sample and identified 16 amino acids and 2 organic acids.

Our study demonstrated a novel approach to the realize faster and more simple sample preparation of GC/MS based metabolomics. Moreover, we newly found the applicability of SPAD to real samples such as plasma and the usability of SPAD in food analysis which contains abundant sugars. This SPAD approach would be more useful in the future to improve metabolomics study by expanding coverage of target analytes and automating sample preparation.