In our representation of the world, how do we link distinct domains of knowledge? We employ analogical reasoning. By using analogies, we can identify similarities between distinct situations, allowing us to solve new problems, transfer solutions from one domain to another, or learn and form new concepts. In this sense, analogical reasoning is essential for abstract thinking and creativity. In analogical reasoning, similarities concern the way objects are related rather than the objects themselves. For instance, “the electron is to the atomic nucleus as the earth is to the sun” is a typical analogy in which objects are different, but share the same relationship, e.g., “revolve around”. 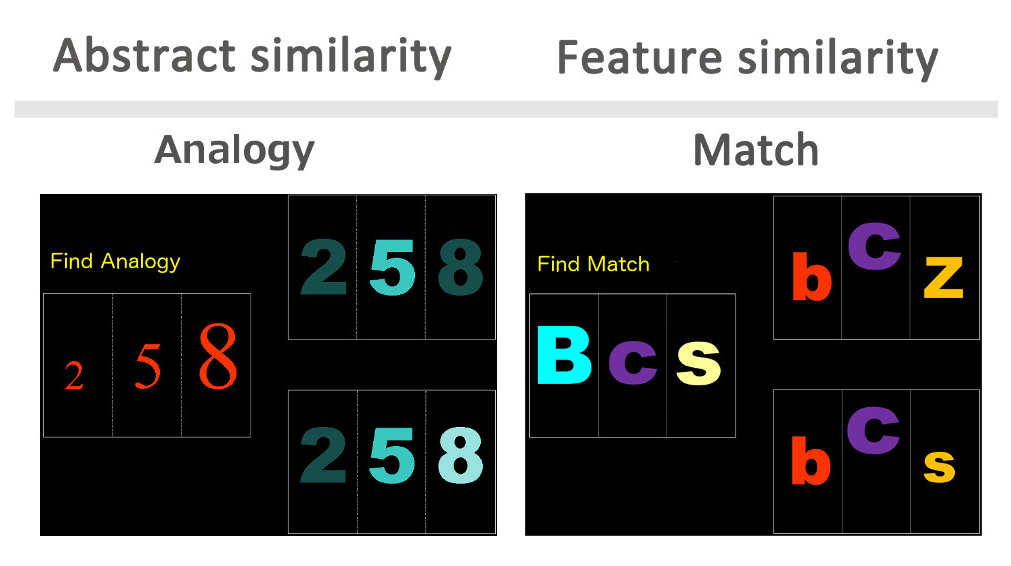 Fig. 1. Schematic representation of the task. In each condition, participants were asked to choose from the sets of stimuli on the right the one that matched the left set of stimuli. The left panel displays an example of an analogy trial. The correct answer is the right bottom set because there is an increase in brightness of the stimuli that is analogous to the increase in size of the stimuli of the left set. The right shows an example of a match trial based on feature similarity. The correct answer is the right bottom one because its component letters are the same to those of the left set.

We assessed analogical reasoning in 27 patients with a focal lesion in the frontal lobes, and explored which lesion locations were associated with a deficit in the task. The patients were administered a computerized visuospatial analogy task that has been previously associated with the left anterior frontal region in healthy subjects (Fig. 1). In the analogy task, patients had to indicate by a button press which set of stimuli on the right part of the screen (the top one or the bottom one) was similar to the set on the left part of the screen, based on a relational rule (i.e. proportional increase). Performance at this task was compared to performance at a control match task that had a similar design, but in which participants based their choice on the physical features of the stimuli (i.e letter identity) instead of their relationships.

In patients, the relationships between the lesion, the loss of connectivity due to the lesion, and the deficit at the task were explored using magnetic resonance imaging (MRI) techniques and two main neuroimaging analysis methods. The lesion-deficit analysis revealed that the region critically associated with a specific deficit in analogical reasoning was located in the anterior frontal cortex and was left lateralized (Fig. 2). The second type of analysis (tract-deficit analysis) allowed us to show that the integrity of some of the connections (white matter tracts) of the left anterior prefrontal region was also required to perform accurately the analogy task. The anterior frontal region can be viewed as an important node where different types of information from different networks converge to be integrated.

Fig. 2. The region associated with a specific deficit in analogical reasoning (in red) is located in the left anterior frontal cortex. A/ the region is superimposed on the surface rendering of a normal brain (R: right, L: left; Front.: frontal). B/ localisation of the region on axial slices from coordinates z= -10 to z=3 (R: right, L: left; Front.: frontal).