Similarly to their macroscopic counterparts, molecular motors can be defined as extremely small motors, that provided with a source of fuel perform mechanical work. The key is in the large scale difference: the motor is represented by just one molecule or a small molecular assembly. Most molecular motors convert light or chemical energy into mechanical movement. The inspiration to design molecular motors comes from nature, which uses them in various biological processes. Light is often preferred to other kinds of energy, due to the fact that it can be easily controlled and it does not generate waste products. 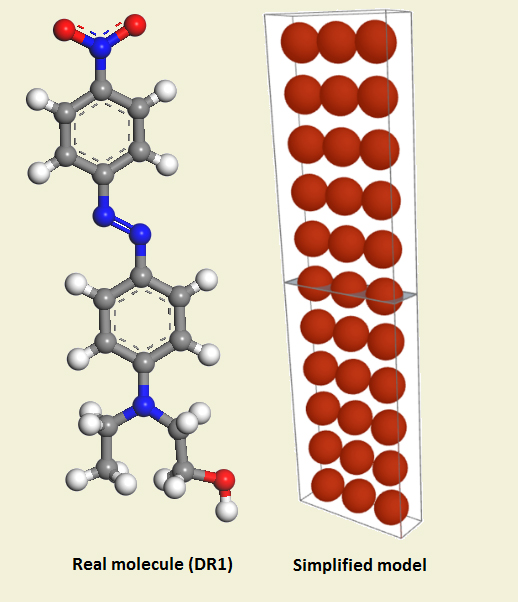 Fig. 1. Picture of a real molecule Disperse Red 1 (DR1) compared to a simplified molecular motor model consisting of three rows of atoms, both in unfolded form.

Azobenzenes represent an important class of light fueled molecular motors. These molecules are subject to successive cycles of folding – unfolding when illuminated, called photoisomerization. The folding/unfolding is a robust movement, as it cannot be stopped unless significant confinement is applied (pressure > 1 GPa). Through photoisomerization, azobenzenes have the ability to determine major changes in the surrounding matter at macroscopic scale. One can imagine these molecular motors as dragging and pushing the neighboring molecules as they fold and unfold. While the exact mechanism of this phenomenon of mass transport is not completely understood, nanotechnology in this field is already promising. Azobenzene-containing materials are used to produce nano surface relief gratings with applications in tissue engineering, high density information storage and high efficiency solar cells.

In our work, we investigate the motion of the surrounding matter under the influence of azobenzene-like motors at the nanometric level through computational chemistry. We carried out molecular dynamics simulations using simplified models of molecules. The motor designed with a rectangular shape folds periodically with two symmetrical arms (Fig. 1). Our system consists in 500 host molecules and one molecular motor diluted in the host medium.

This molecular dynamics study offers the possibility to access data at molecular level, regarding how mass transport takes place as a result of photoisomerization. The direct relation that we found between the relative sizes of the motor’s arm length and the size of the host molecule is of experimental importance, as they are easily controlled parameters. This could guide us to design new molecular motors that have the ability to move efficiently inside the medium.

How does the motion of the surrounding molecules depend on the shape of a folding molecular motor?
Ciobotarescu S, Hurduc N, Teboul V
Phys Chem Chem Phys. 2016 Jun 7