During early vertebrate development, the dorsal ectoderm forms the primordium of the central nervous system along the rostro-caudal axis: the neural tube. The closure of the neural tube is a complex process that depends on adequate genetic and environmental conditions; more than 200 genes are required its completion in mice. Failure in the last stage of neural tube´s formation leads to a spectrum of congenital malformations, termed neural tube defects (NTD), which generate postnatal disabilities that range from motor difficulties to perinatal death. Cranial NTD derives in anencephaly, a dramatic condition that leads to death of the neonate during or shortly after birth. 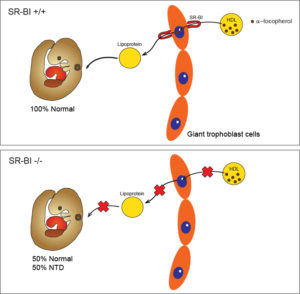 In our lab, during the last years we have been studying a novel mechanism regulating neural tube closure in mice that involves the maternal to embryonic delivery of lipoprotein-derived vitamin E. In our initial studies, aimed at understanding the function of the HDL receptor SR-BI during mouse development, we described that 50% of SR-BI deficient (SR-BI -/-) embryos exhibited cranial NTD (Santander et al, Hum. Mol. Genetics 2013). Strikingly, SR-BI isn´t localized in embryonic tissues, but in cells surrounding the conceptus that mediate nutrient uptake during early development, known as trophoblast giant cells. Since SR-BI in plasma membranes facilitates bidirectional lipid transport from HDL, we hypothesized that this receptor may mediate the maternal-embryonic transfer HDL lipids. In a recent paper, we analyzed if aberrant maternal cholesterol or vitamin E uptake explained NTD in SR-BI -/- embryos, as those two lipids are important during early development and transported via SR-BI (Santander et al, Sci. Rep. 2017). We found that embryos lacking this receptor showed normal levels of cholesterol, but extremely low levels of vitamin E (Fig. 1). This vitamin was identified as a lipid required for the success of pregnancy in rodents. In our studies, feeding pregnant dams with a vitamin E-enriched diet completely prevented NTD in SR-BI -/- embryos, an effect that was associated with a reduction of oxidative species and a normalization of gene expression in those embryos.

Our recent studies implicate vitamin E metabolism as an important environmental regulator of neural tube closure in mice and open the possibility that this may also be the case in other mammals. In fact, recent studies in fish showed that embryonic vitamin E deficiency results in abnormal brain development. In humans, anencephaly has a prevalence of around 1 in 10,000 livebirths, depending on the genetic composition and nutritional status of the population. The most effective preventive intervention for anencephaly at a population level is the fortification of flour with folic acid, which has reduced the incidence of NTD by near 50% in several countries. Despite folic acid´s effectiveness, the existing residual risk of NTD supports the need for additional preventive strategies. In humans, knowledge on the involvement of vitamin E metabolism during neural tube closure is limited. Vitamin E supplementation during pregnancy has a bad reputation: studies using this intervention from mid to late pregnancy were inefficient in preventing disorders such as preterm birth or preeclampsia and, in some patients, vitamin E supplements may reduce blood clotting. In our view, encouraging adherence to healthy and well-balanced diets to ensure appropriate vitamin E consumption may represent a safe, cost-effective and simple intervention to reduce the remaining risk of human NTD. Indeed, adherence to the Mediterranean diet, rich in nuts, green leaves, and vegetable oils, was recently associated to lower incidence of embryonic malformations. Pre-pregnancy vitamin E supplementation may be beneficial for women who already conceived a child with NTD, as the recurrence of this dramatic condition is nearly 10%.