Glioblastoma (GBM) is the most common primary brain neoplasm. The standard therapy for GBM consists of surgical resection to the extent that is safely feasible, followed by chemoradiotherapy (CRT) with temozolomide. The prognosis is still poor; the median overall survival is approximately 15 months, and the 5-year survival rate is less than 10%. Although several different treatment strategies have been investigated in numerous clinical trials, they do not provide a significant overall survival benefit over the standard treatment. 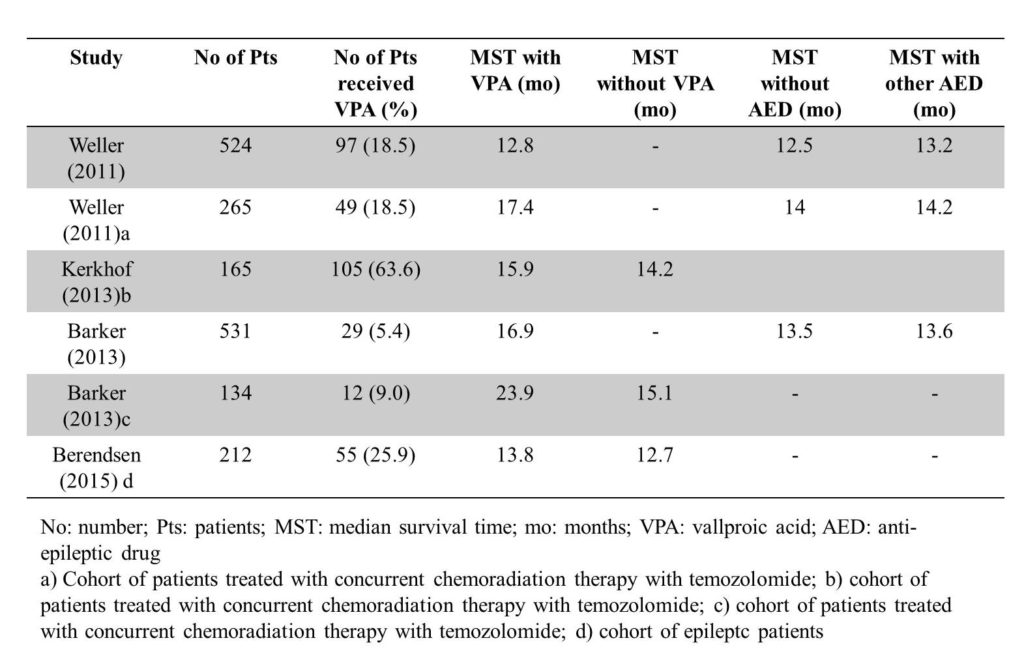 Seizures often represent the first clinical symptom of patients with GBM, and valproic acid (VPA) is one of the frequently used anti-epileptic drugs (AED) for such patients due to its effectiveness and relatively low toxicity profile. Although the benefit of VPA use to during postoperative treatment has been indicated in some retrospective studies, it is still unclear and controversial. Thus, we conducted a literature review focusing on the findings of clinical studies, and evaluate the role of VPA in the treatment of GBM.

The reported effects of VPA on survival outcomes were summarized in Table. The conclusions of studies were various. In one study which included heterogeneous patients who were treated with radiation therapy or chemotherapy alone, VPA did not provide a significant effect on survival. None of patients without epilepsy received prophylactic AED treatment included the study. On the other hand, the prognosis of patients who received VPA during CRT had been reported to be favorable compared with those were received other AED or those were not received AED. The data of in vivo and in vitro studies suggest that VPA has a radiosensitizing effect for GBM and radioprotective effect for normal brain tissue of hippocampal neurons. Thus, concurrent use of VPA during CRT, regardless of the presence of epilepsy or seizure, is considered to be essential to improve the outcome of patients of GBM.

Although the appropriate regimen of VPA use during CRT has not been established, Krauze et al. reported the results of a prospective trial which evaluated the addition of VPA to standard chemoradiotherapy in patients with newly diagnosed GBM. The reported survival outcome was favorable compared with historical data and promising. Moreover, addition of VPA to the standard treatment was well tolerated and the trial could be the landmark.

In summary, VPA is a promising agent to improve survival outcome of patients with GBM treated with CRT. Further investigation is warranted to establish the role of VPA in the treatment.