Ventral medial prefrontal cortex: is it a brain target for drug-seeking control?

A weak direct current applied non-invasively (transcranial Direct Current Stimulation – tDCS) over the scalp in both sides over the frontal lateral region of the head, corresponding to what it is called as the dorsolateral prefrontal cortex, produced important clinical and brain functional changes in drug addicts. Intriguingly, in those alcoholics or crack-cocaine users showing decreasing relapses to the drug use after repetitive (five sessions) tDCS, during the treatment and especially in the following months, a particular frontal region, named as ventral medial prefrontal cortex (vmPFC), located in the inner and bottom side of the frontal region, showed the largest change in activation measured by means of a electrophysiological method, when subjects were visualizing images related to the drug use, such as a popular alcoholic beverage, someone drinking beer, a cup of beer being pulled, for alcoholics, or crack-cocaine rocks, someone smoking crack-cocaine, pipes or paraphernalia for drug use, for crack-cocaine users. 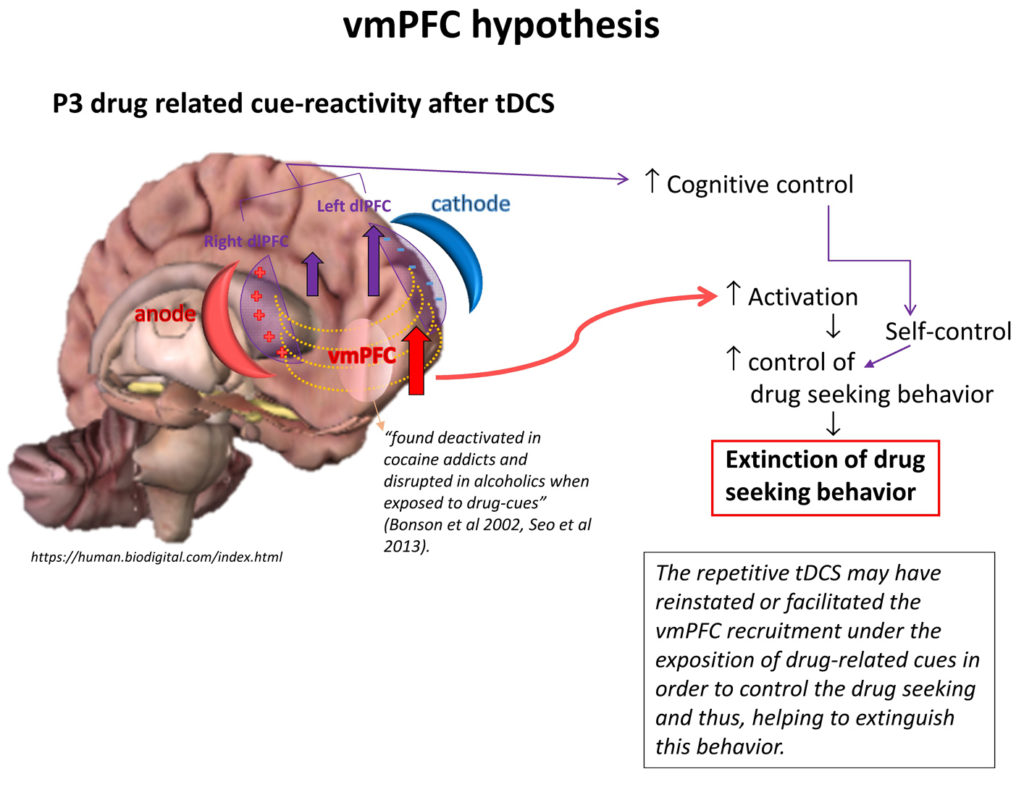 Fig. 1. This is a diagram representing the possible involvement of the ventral medial prefrontal cortex (vmPFC) in drug addiction and its change after non-invasive brain stimulation. The bilateral repetitive (five sessions) transcranial Direct Current Stimulation (tDCS: cathode left/anode right) applied over the dorsolateral prefrontal cortex (dlPFC) increased the activation in their underneath, possibly providing greater cognitive control, but the greater change in activation after tDCS was seen in the vmPFC, probably corresponding to the maximum peak current in the path between the electrodes. This vmPFC activation may result in restoration or facilitation of drug-seeking control.

Alcoholics or crack-cocaine users from a control group not receiving the brain stimulation and who had relapsed to the drug use showed completely different pattern of brain activation. Intending to assure that this change was real, crack-cocaine users had their brain connectivity measured by functional magnetic resonance imaging method and it was found that a specific connection between the vmPFC and a more deep brain structure usually related to drug addiction, named as nucleus accumbens (NAcc), increased in those patients showing significant decrease of craving (an uncontrollable urge for drug use) after repetitive tDCS, but not in patients from non-stimulated control group, in whose craving was unchanged.  Considering that the vmPFC controls drug-seeking behavior, by extinguishing this behavior and perhaps also by increasing the ability of self-control and decision-making, we suggest that the activity of this brain region may constitute a potential target for treatment of drug addiction.