Biomineralization describes a process of programmable accumulation, concentration, and construction of inorganic ions regulated by organisms to form both amorphous and crystalline materials that possess well–controlled chemical components, microstructures, morphologies, and functionalities. For instance, skeletons and shells are well-known biominerals for structural and protective purposes that are produced by living organisms. Understanding and reapplying the mechanism of biomineralization has enriched contemporary research efforts in the smart and efficient self-assembly of inorganic materials. Inspired by these discoveries, a new and emerging filed called biomimetic mineralization has arisen, which seeks to reapply the mechanism of biomineralization to fabricate novel biochemical composites that cannot be generated in nature. This novel synthetic strategy allows scientists to discover numerous possibilities to fabricate new families of functional biomolecules for specific needs. One aspect of biomimetic mineralization—the creation of porous yet hard surfaces—has only recently been investigated.

Metal organic frameworks (MOFs) represent a type of synthetic coordination polymer with well-defined porous crystallinity, high specific surface areas, and highly tunable structure and composition. In general, MOFs are formed from rigid organic “struts” that bind with metal ions or clusters called “nodes” to generate periodic unit cells in all three dimensions.  Thanks to their general ease of synthesis, thousands of MOFs have been prepared and are being investigated in a broad range of applications that favor molecular sieving, catalysis, and energy storage properties. Recently, MOFs—in particular the well-known and hydrolytically stable ZIF-8—are readily prepared via biomimetic mineralization using biomacromolecules as templates (Fig. 1). More importantly, the as-mineralized ZIF-8 has been shown to be a robust yet permeable protective shield for inlaid enzymes to overcome harsh denaturing conditions by acting as a protective cast. At the same time, these enzymes retain accessibility for catalytic reactions owing to the shell’s inherent porosity. One issue, however, has been the lack of size and morphology control, which remains a challenge for these biomimetic mineralized MOF composites for contemporary or future applications, which will demand precision in manipulation on the nanometer scale. 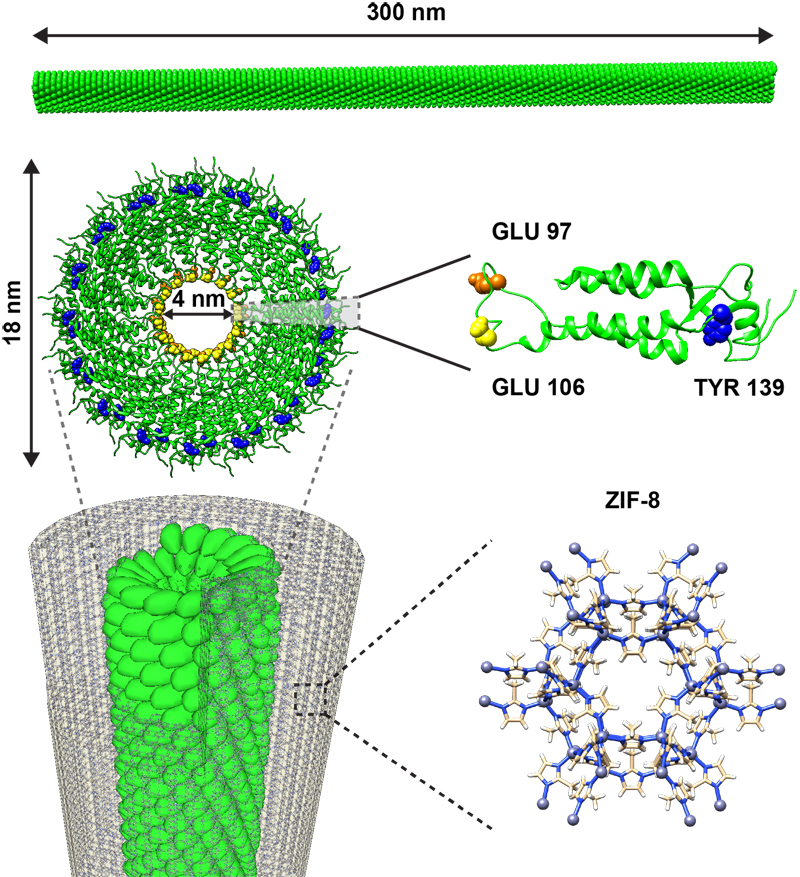 Fig. 1. TMV is a tubular protein with an inner pore that is 4 nm and is 300 nm long. It has amino acids residues (TYR 139) that we used to create a diazonium dye. We can grow a coating of ZIF-8, a metal-organic Framework on the outside to create a thin shell of porous crystals on the outside. While the shell is strong enough to protect the virus against denaturing with boiling water, it is porous enough that we can still do chemistry on the surface of the virus. Specifically, we did a diazonium coupling on the outside of the virus to make a diazo dye!

Tobacco mosaic virus (TMV) is a robust biological template for biomimetic mineralization. The viral particle has a tubular structure of approximately 300 × 18 nm with an inner longitudinal channel 4 nm in diameter, which is constructed by the self-assembly of 2130 identical coat proteins along a single strand RNA. This high aspect ratio tubular protein nanoparticle possesses extraordinary stability in a broad range of temperatures (up to 60 °C) and pHs (2 to 10). The native tubular structure is chemically addressable on either its exterior or interior. We suspected that this “nano-tube” would be the perfect template to prepare anisotropic MOF based nanoparticles as others have done with nanoparticles in other biomimetic approaches.

We were able to successfully show that ZIF-8 can crystallize and closely pack on the TMV viral nanoparticle while retaining the anisotropic rod shape of the underlying virus using electron microscopy. We also show that the thickness of the MOF shell can be readily controlled by tuning crystallization conditions (Fig. 2). 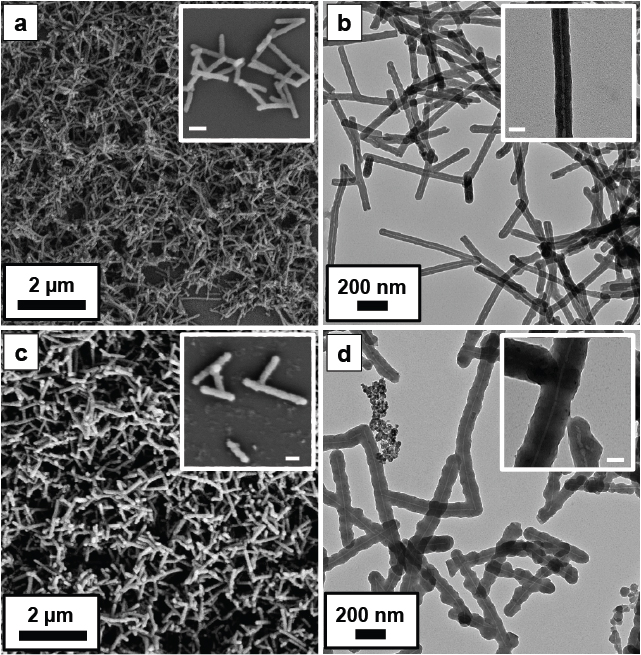 The TMV@ZIF-8 core-shell nanoparticles demonstrate good structural stability even after soaking overnight in organic solvents and sitting in boiling water for 20 minutes! Such conditions would ordinarily immediately denature the exposed viral template. ZIF-8 is porous, and we were able to demonstrate that the inner protein is still accessible by doing a chemical reaction through the shell. TMV has exposed tyrosine groups on its exterior and we were able to synthesize a diazonium dye on the exterior without undermining the integrity of the rod-shaped hybrids. We believe that this demonstration of TMV@ZIF-8 as a prototype could inspire the fabrication of more virus@MOF composites that can render novel design and characteristics of core-shell nanoparticles with more sophisticated functionalities.