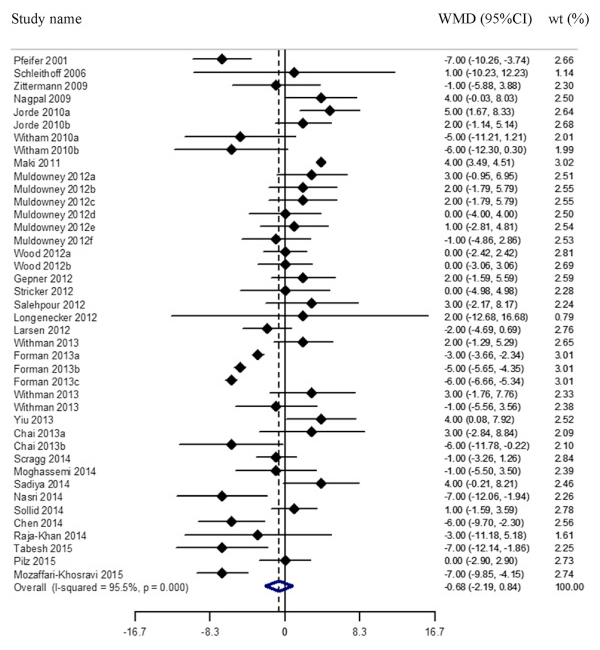 We aimed to evaluate the effect of VD3S on systolic and diastolic blood pressure in a meta-analysis. Literature searches of PubMed, Scopus, Ovid and Google scholar for publications in English were conducted up to April 2015. The following key words were used for studies pertinent to the study objectives: ((“Cholecalciferol”[Mesh] OR Vitamin D3 supplementation [title/abstract]) OR (vitamin d3[title/abstract] AND supplementation[title/abstract])) AND ((“Hypertension”[Mesh] OR “blood pressure”[Mesh]) OR (hypertens*[title/abstract])). RCTs which assessed the effect of VD3S on systolic and diastolic blood pressure were selected. Studies were eligible for inclusion if: a) the study design was a RCT, b) the intervention was oral VD3S, c) the outcomes of interest were SBP and DBP, d) the population of interest was adults (aged >18 years). Trials which compared VD3S vs. placebo, or used VD3S in combination with calcium vs. calcium, were included. We screened 700 published articles which passed the initial inclusion criteria, of those 30 studies with 41 arms (including 4744 participants) were included in the meta-analysis. 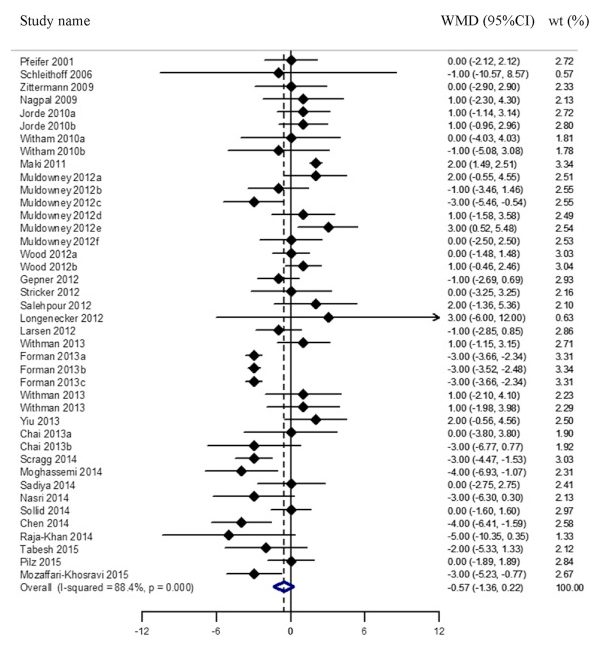 The overall results of our meta-analysis have indicated that VD3S has variable impact on hypertension. Daily VD3S with a dose >800 IU/d or during <6 months intervention can significantly reduce SBP and DBP. In addition VD3S had a significant hypotensive effect in healthy subjects and hypertensive patients. In contrast VD3S significantly increased SBP and DBP in overweight and obese subjects, and when provided along with calcium.