Voice modulation: A window into the origins of human vocal control?

Men and women with low pitched and resonant voices are stereotypically judged as dominant, physically large, and masculine. Our voice pitch even affects how competent and trustworthy we seem. These stereotypes appear intricately linked to the fact that men’s voices are deeper than women’s, but even at the same-sex level, it seems that we can modulate the sound of our voices to take advantage of these social stereotypes. For instance, research has shown that men lower their voice pitch when talking with another relatively submissive man, potentially signaling their own dominance rank, and that both sexes change their pitch when talking to someone attractive. Men and women can also modulate their voices ‘on demand’, for instance to sound more masculine or larger. 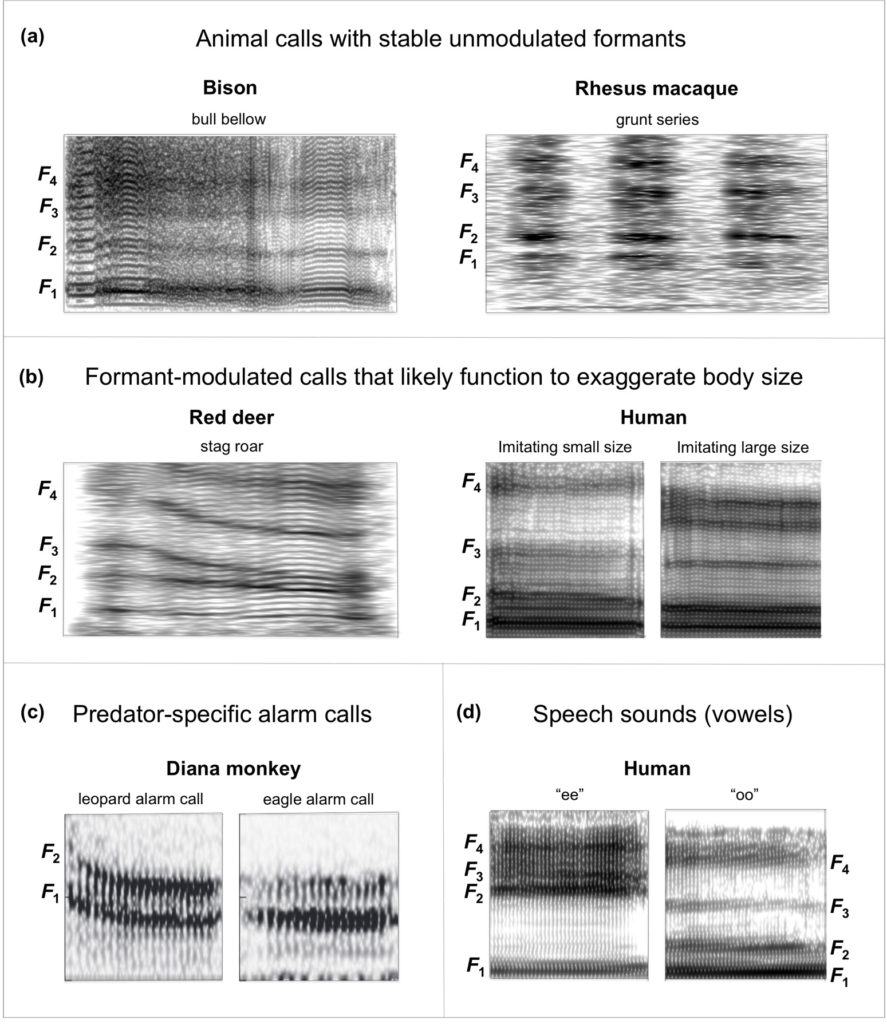 Fig. 1. Formants are broad bands of energy (labeled F1-F4). In animals, formants are typically stable and predict body size (a). However, some species have evolved the ability to modulate formants to exaggerate body size (b), or even “label” different categories of predators (c). Control over these modulations may be at the origins of the complex vocal control required for articulated speech (d). Image adapted from Pisanski et al. 2016, TiCS.

Why does this matter? Beyond the practical consequences of voice pitch, for example in dating, politics and employment, vocal modulation may offer insight into our evolutionary past and specifically, the origins of human speech.

To produce different speech sounds, humans must volitionally and flexibly control their vocal folds (affecting voice pitch) and the configuration of the their vocal tract (affecting vocal tract resonances or ‘formants’). Humans are the only animals capable of such complex, articulated speech. However, many other mammals (for example red deer) can uniformly scale their voices in similar ways as humans to express dominance in the appropriate social context (Fig. 1). Recent studies (most on captive great apes) further show that nonhuman primates may share our capacity to vary their voice pitch and formants to some extent. Thus, while human vocal control capabilities are unparalleled, this capacity is not, it seems, uniquely human.

In our paper, we argue that vocal control in humans probably first emerged for the purpose of communicating socially relevant information like body size and aggression, and that this capacity for vocal control became increasingly sophisticated, eventually leading to full-blown articulation.

We provide support for this hypothesis from behavioural studies of voice modulation in humans and other mammals as well as from brain imaging studies, that together suggest that nonhuman primates may actually have some flexible neural control over their vocal production. Moreover, in the human brain, new evidence suggests that the two vocal pathways traditionally thought to independently control basic spontaneous vocal production such as laughter – or – more complex volitional vocal production such as speech, are highly interactive (Fig. 2). This suggests that neural vocal control in other great apes might actually more closely resemble that of humans than previously thought, or at least, that nonhuman primates use older vocal systems in surprisingly flexible ways. 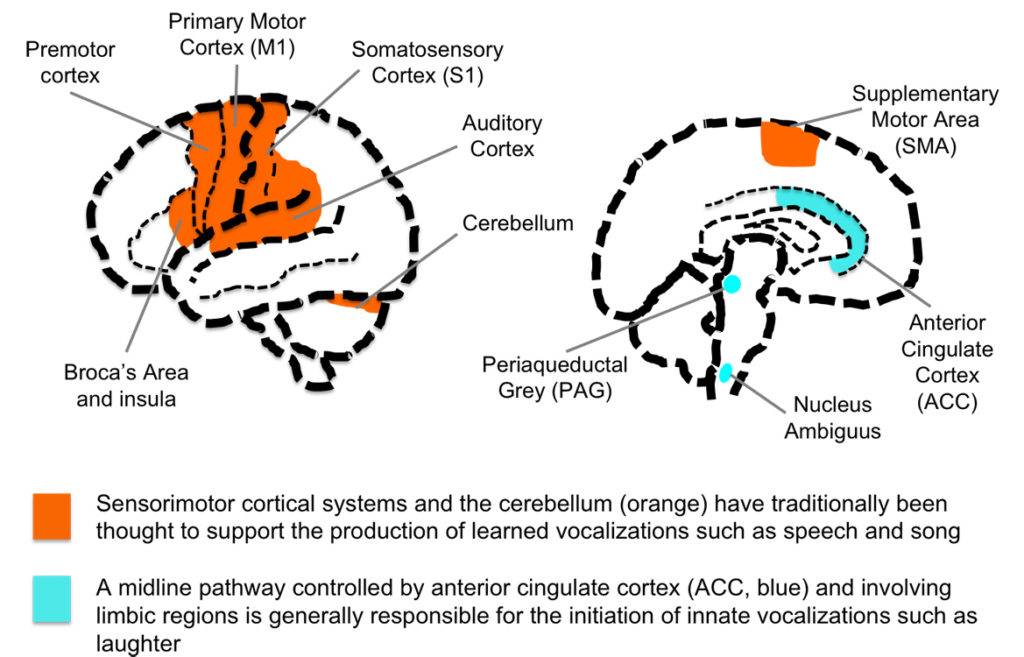 We can draw one key conclusion: humans’ ability for flexible vocal control appears to have emerged before our ability to control these same voice features for speech. So, our ancestors may have first began to control their voices not to communicate linguistically, but rather to express, exaggerate, or even fake traits such as body size and emotion. Over time, this could have allowed humans to develop sufficient vocal control for speech production.