Inconspicuous in its inactive state, a protein called “von Willebrand factor” (VWF) evolves to a real lifesaver in case of an injury. Blood clotting is responsible for stopping a wound from bleeding, but how does this work?

VWF plays an important role in this process (Fig. 1): In a normal state without any injury, it drifts around in the blood, coiled like a loose ball of wool (A). When we hurt ourselves (B), however, the situation changes dramatically. In the area of an injury, collagen is exposed and the VWF ball connects to this collagen with a loose end and uncoils in the blood stream. Now, it can capture circulating blood platelets and direct them to the damaged vessel wall (C). Once caught by VWF, the platelet changes its shape dramatically, turning from a non-sticky sphere to a very sticky disc. The platelet further develops small arms (D) to “hold” other platelets, which were similarly captured by VWF. As a result, a net of many VWF strings and sticky blood platelets is formed and the wound is closed by this sticky plug (E). 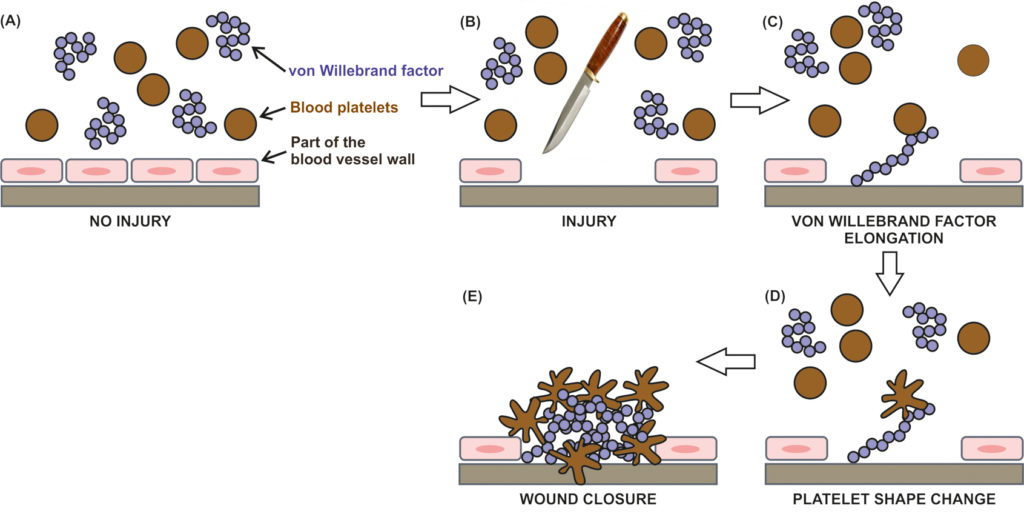 Fig. 1. Blood clotting is induced by the vessel glue protein von Willebrand factor (VWF). In a state without any injury, VWF and blood platelets, other important players in wound closure, drift around in the blood passively (A). In areas of injury, the VWF captures blood platelets (B-D). Then, a sticky network of VWF and platelets seals the damaged vessel wall (E).

As helpful this mechanism is in the case of an injury, it can lead to unwanted and dangerous effects, such as thrombosis or stroke, when triggered unwantedly without vessel damage. Therefore it is important to understand what is going on within the VWF while being activated. To explain this process, we used an Atomic Force Microscope (AFM), which can visualize biological structures in the size of only a few millionths of a millimeter and detect unimaginable low forces (trillionth Newton) between molecules. In preliminary studies we succeeded in generating images of single blood platelets. Later, we went one step further into detail. With the help of an AFM we can hang a protein or parts of a protein to a kind of fishing line to study interactions between two proteins. With this, we discovered why the von Willebrand factor does not catch blood platelets when it is coiled. The stronger blood flow in an area of injury uncovers a little “sticky” area (“binding site”) of the VWF which then catches the blood platelets. We described this mechanism in great detail and computer simulations confirmed our findings with AFM.

We are only at the beginning of VWF research, but once we fully understand VWF and learn how to control it, we could prevent life threatening events like thrombosis or stroke and immediately stop bleeding of big injuries. “Star Trek healing devices” would then be just a little step away.