What do we breathe? A study of particular matter exposure and deposition in the human respiratory tract

Have you ever thought about the diameter of a single hair from your head? It is somewhere between 50-70 µm. (micrometres, or thousandth of millimetres) wide. Small, isn’t it? Well, now think about liquid or solid droplets more than ten times smaller, able to float in the air, and very heterogeneous in chemical composition, and you will have an idea of what is the inhalable particulate matter (PM). Nowadays, PM is a concern because its inhalation is related to adverse health effects, including asthma, cardiovascular episodes and lung cancer. These effects are related not only to the chemical composition of PM, but also to its size, being the smaller the PM the more harmful. Sources of PM are also diverse: they could be natural (sea spray, pollen) or manmade (traffic, industry, agriculture), being the latter prevalent in urban and industrial environments.

In this study we aimed to evaluate the exposure of human population to outdoor PM in an area influenced by a cement plant and two highways. To do so, we studied exposure of three population groups (children, adults and retired), taking into account their physiological characteristics and daily use of time. Activities performed by every population group were classified as indoors (sleeping, sitting and light exercise indoors), or outdoors (light exercise outdoors and heavy exercise). Outdoor levels of PM10, PM2.5 and PM1 (smaller than 10, 2.5 and 1 µm respectively) were measured in two seasons: winter and summer. Two different indoor environments were assessed: workplace and home. PM concentrations in these two places were calculated from outdoor PM levels by using a simulation software. Furthermore, in order to know how far PM could travel within the respiratory tract, we modelled PM deposition in nose/head, tracheobronchial and lung regions. 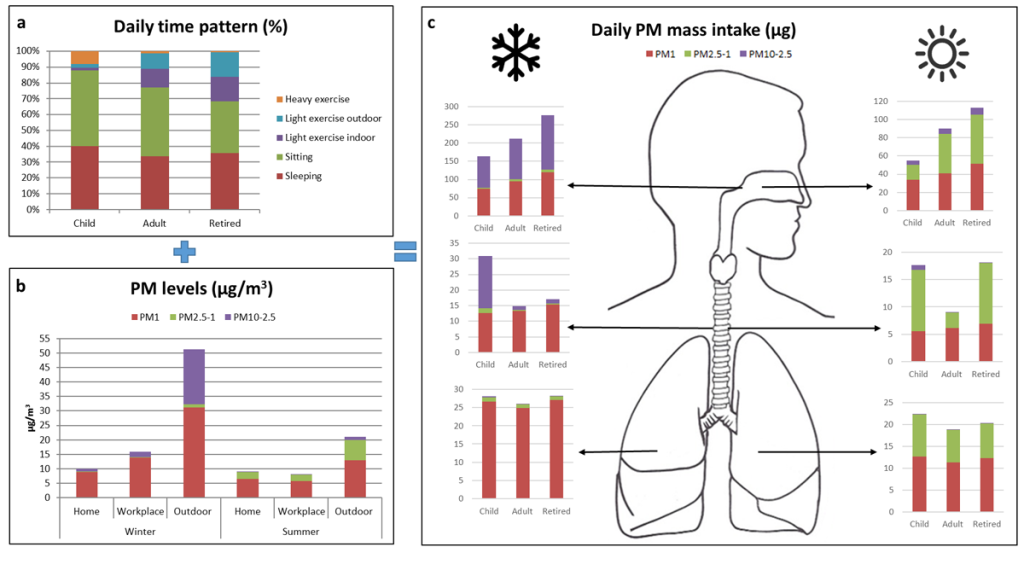 Fig. 1. Daily activity pattern for the three population groups (a), PM levels in every environment (b), and PM deposited mass in every region of the respiratory tract (c).

We found that outdoor PM levels were higher in winter than in summer (Fig. 1b), which is explained by an increase in the use of traffic and heating systems (PM releasing sources), and air stagnation triggered by anticyclonic conditions registered during the cold season. Although home and workplace concentrations of PM were smaller than outdoors, inside air is enriched in PM2.5 and PM1. Smaller size of these fractions of PM favours their entrance indoors. Regarding the deposition within the human respiratory tract, nose/head was the region that retained the biggest amounts of PM, regardless PM size and population group (Fig. 1c). Biggest particles (those between 10 and 2.5 µm, or PM10-2.5) were mainly retained in this part. Deposition in lung region is characterised by registering the highest contributions of PM1. Tracheobronchial region shows a transition profile between head/nose and lung. Retired people were the group experiencing highest mass of PM in the respiratory tract as a whole due to the great amount of time spent by them outdoors (17%), where PM levels are higher. In turn, children spend less time outside, but most of this time they are performing heavy exercise activities (Fig. 1a), and, therefore, breathing with more intensity. The three population groups reached similar deposited mass in lung region, which is especially dangerous for children (smaller body weight and immune system not fully developed) and retired (more susceptibility to respiratory disorders).

The methodology here described seems to be a powerful tool to assess population exposure to PM. However, to have a better approach, future studies should include contributions from indoor PM sources such as gas stove or tobacco.