Leprosy affected 214,000-300,000 people per year globally between 2005 and 2014. It remains as a public health problem, particularly in the poorest communities of developing countries, such as India, Brazil and Indonesia. Globally, these three countries accounted for 81% of all registered new leprosy cases in 2014. Leprosy is a chronic infectious disease caused by the Mycobacterium leprae. It affects mainly the skin and peripheral nerves, which can lead to severe physical disabilities and deformities if not diagnosed and appropriately treated in its early stages. Evidences suggest that M. leprae can spread from person to person through nasal and oral droplets and this is considered to be the main route of transmission, especially among household contacts and neighbours of an untreated patient. Early diagnosis and complete treatment with antibiotics remain the key strategies for reducing disease burden due to leprosy. 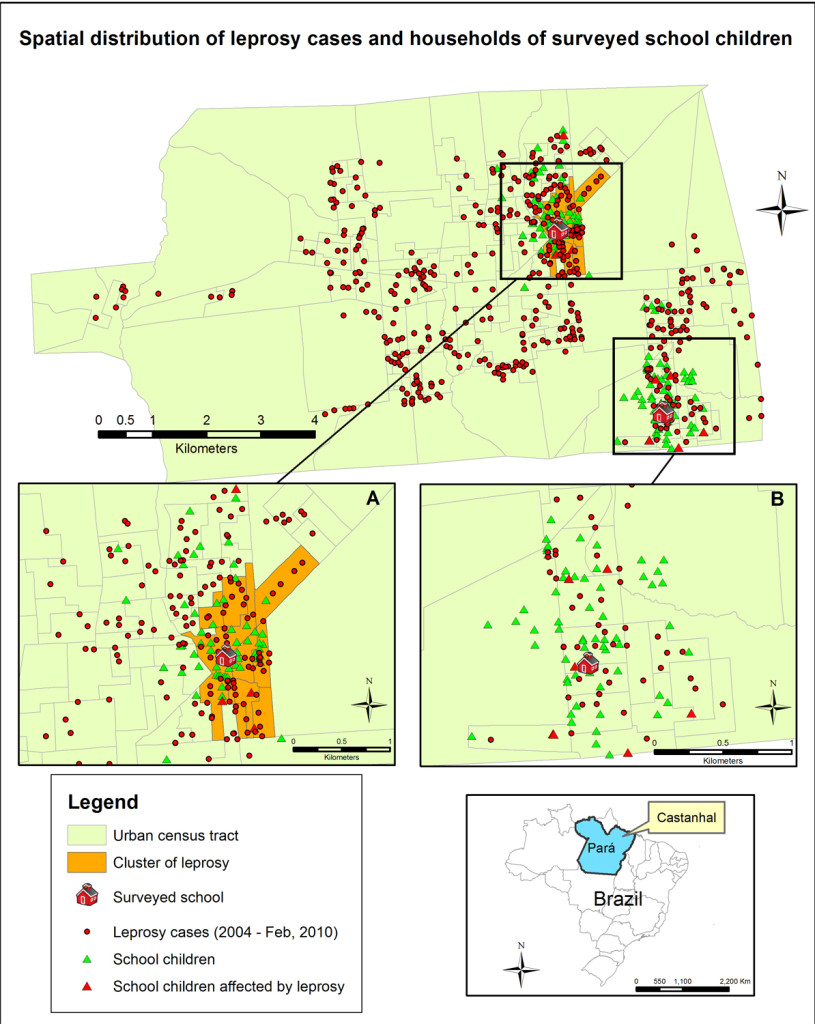 Fig. 1. Spatial distribution of leprosy cases and households of surveyed school children in the urban area. We mapped 499 (87%) of the total reported cases in the urban area of Castanhal, as detected from 2004 to February 2010 (SINAN database) and the residences of 134 examined school children. a The most likely cluster of leprosy cases determined by Kulldorff’s spatial scan statistics (orange area; p)

Spatial epidemiology describes where the diseases and their risk factors are located in global, national, regional or local levels. It has become an increasingly important tool in public health to study transmission dynamics of several diseases and for building interventions targeting high-risk areas. Therefore, the main objective of this study was to describe and evaluate a targeted screening strategy for the early diagnosis of leprosy cases, involving school-based active clinical surveillance in high risk areas. Additionally, we followed subjects with or without immunological evidence of subclinical infection (as defined by the presence or absence of antibodies against the Mycobacterium leprae).

We selected two elementary public schools located in areas most at risk (cluster of leprosy or hyperendemic census tract), determined by spatial epidemiology, to clinically evaluate their students in a hyperendemic municipality of the Brazilian Amazon region. We also followed anti-PGL-I seropositive and seronegative individuals and households for 2 years to compare the incidence of leprosy in both groups.

Targeted screening involving school-based surveillance planned using results obtained by spatial analysis and targeted household and individual continuous surveillance based on serologic data significantly increases the likelihood of early detection of new leprosy cases. Based on our findings, we strongly believe that if largescale school children surveys are performed in specific spatial clusters of leprosy in each hyperendemic municipality with well-trained personnel, the detection rate would be much higher. We advocate such an approach both for public health reasons and because it will be more cost-effective than what has been conducted in endemic countries.