Which better for cardiac surgery, VIMA or TIVA?

Approximately 1 million cardiac surgery procedures are performed worldwide every year. Morbidity and mortality after this kind of surgery continue to decrease, but nonetheless remain higher than in other fields of surgery, predominantly because of insufficient cardiac protection. Recent experimental findings have demonstrated the benefits of Inhalation Anesthesia on the process of cardiac protection compared to Total Intravenous Anaesthesia (TIVA). The first is caused by Anesthetic Preconditioning (AP) – a phenomenon very similar to Ischemic Preconditioning, but initiated by halogenated agents. Unfortunately, thus far all attempts to use AP in a clinical setting have given controversial results. Few studies on the effects of anesthetic preconditioning have collected data on long-term survival, and meta-analyses have also returned contrasting findings. 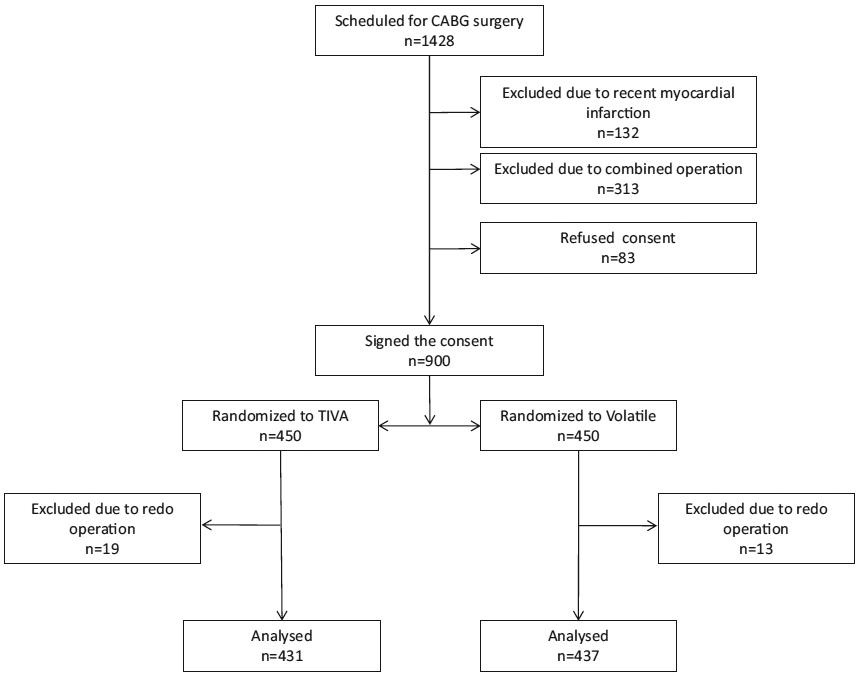 One likely reason for the existing data’s ambiguity is the concomitant use of propofol in most trials. Some experiments suggest that propofol has an inhibitory effect on volatile anesthetics’ cardioprotection. Furthermore, all the findings published to date were from small or medium-sized trials and meta-analyses. Previous studies have suggested that volatile agents could improve recovery from post-operative myocardial stunning in cardiac surgery, resulting in a reduced length of hospital stay (LOS), but this has never been confirmed in a large randomized controlled trial (RCT). LOS itself could be considered a composite endpoint of all relevant postoperative complications. The aim of this study, therefore, was to determine whether the beneficial effects of volatile anesthetics can result in a reduced LOS after CABG surgery with cardiopulmonary bypass (CPB).

A total of 900 patients were recruited in two Russian university hospitals between September 2012 and April 2014. 450 were randomly assigned to receive TIVA and 450 to receive sevoflurane (Fig. 1).

This study confirmed that sevoflurane-based anesthesia for CABG surgery with CPB is linked to cardiac protection and a reduced LOS (Tab. 1). It was the largest RCT performed so far on this issue (TIVA vs. halogenated anesthetics in the perioperative period of any surgery), and the findings concurred with previously published trials. Importantly, the study confirmed that the cardioprotective properties of volatile agents might extend outside the perioperative period, with a trend toward a reduction in mortality for patients receiving sevoflurane. Because this was an RCT, the differences in outcomes can be attributed to the different anesthesia plans. Few other published studies have suggested that volatile agents could have long-term effects. Similarly to ischemic preconditioning, volatile anesthetics can trigger an acute cardioprotective memory effect that lasts beyond their elimination. Not only does the effect last throughout the classical preconditioning windows, but it can also reduce the chance of later heart failure, improving survival rates. Another possibility is that the effect on long-term survival is linked to the fact that perioperative cardiac damage can contribute to later cardiac complications and possible mortality.

One intriguing finding of the study was that it confirmed the hypothesis that propofol inhibits volatile agents’ cardioprotective properties, thereby contributing to surgery-induced release of cardiac biomarkers and, possibly, a trend toward increased postoperative mortality. This finding is capable of changing modern conceptions about patient safety in anesthesia, and justifies more prominent use of Volatile Induction and Maintenance of Anesthesia (VIMA) for CABG surgery and perhaps cardiac surgery generally.