Why are all button mushroom cultivars similar?

Button mushrooms (Agaricus bisporus) are very popular edible mushrooms. However, for such an important crop only few genetically different cultivars are available. One of the main reasons for this is the unique way in which the genetic material is inherited in this mushroom. Like most mushrooms, button mushrooms produce spores on special cells (basidia) located on lamellae (gills). Spores can be considered as gametes, like sperm and eggs in plant and animals and used for breeding. For  most organisms the nucleus of the cells contains two sets of chromosomes, each set originating from one of the two parents involved in mating. Gametes must thus have only one set of chromosomes. When gametes are produced, a mechanism must be available to reduce the number of chromosomes per nucleus to just one set. That process is called meiosis. 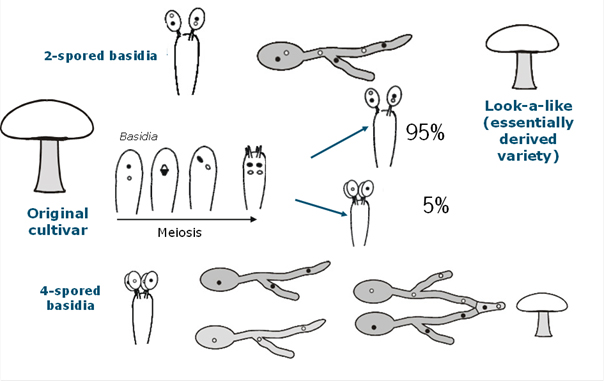 Fig. 1. Spores of mushrooms are produced on special cells, basidia. The 2 parental nuclei fuse, exchange genetic material and produce 4 nuclei with each one set of chromosomes. Whereas in most mushrooms 4 spores are produced per basidium, the button mushroom produces mainly 2 spores. These spores can produce immediately mushrooms without the need to mate. The genetic make-up of such spores are very similar to the original cultivar since exchange of genetic material in meiosis very restricted and the combination of 2 nuclei in one spores restores most of the genetic make-up of the original cultivar. The mushrooms produced are from these spores are look-a-likes of the first cultivar.

There is another reason for the lack of investment in button mushroom breeding. Special cells (basidia) on the gills of most mushroom produce each 4 spores after meiosis. Each spore/gamete contains one set of chromosomes with a unique genetic make-up as we have seen in the previous paragraph. This type of spores can be isolated from different varieties to make crosses and start a breeding program. Button mushrooms form again an exception to this rule. Most basidia do not contain 4 but only 2 spores. The 4 post-meiotic nuclei are distributed in such a way that each spore receives two non-sister nuclei. The effects of such pairing is that chromosomes reshuffled in the first division are paired again into one spore. Such spores are in fact a result of a (internally) mating and can produce mushrooms without the need to mate with another partner. Because the two sets of chromosomes are paired again in the same way as they were present in the parent and in an almost unchanged way, it is clear that the genetic make-up and thus also the mushrooms produced by these spores are very similar to the parent. The selection of this type of spores has been used for decades to generate new varieties from existing ones and are in fact “look-a-likes”. Only a few basidia of button mushrooms produce 4 spores, each having only one set of chromosomes (the ones fit for breeding). It takes time to select these spores. Generating new varieties by outbreeding is thus a difficult task. Once generated, however, it is easy to make a similar variety by selecting spores that have received 2 nuclei. Such spores should be considered essentially derived varieties as defined in plant breeding: a breeder of such a look-a-like must negotiate with the first breeder for a licence. If that is accepted in the mushroom industry, investment in breeding will be encouraged again. Fortunately, a few decades ago, button mushroom varieties have been found that have a “normal” life cycle and easy to breed. Hopefully new varieties will be generated soon allowing consumers to choose between cultivars differing in for example taste and nutritional value.