Why is the transcription factor Pax8 necessary for a functional thyroid gland?

By controlling the synthesis and secretion of thyroid hormones, the endocrine thyroid gland plays an important role in governing organismal development and metabolic homeostasis. The structural and functional unit of the thyroid gland is the thyroid follicle, a three-dimensional (3D) structure comprising a single layer of follicular cells enclosing a central lumen where thyroid hormones are synthesized and stored. Follicular cells are polarized epithelial cells in which the apical surface faces the lumen and the basolateral surface contacts with neighboring cells and the extracellular matrix (ECM). An organized follicular structure is required for synthesis, storage and secretion of thyroid hormones in vertebrates, but the molecular mechanisms that are important for 3D arrangement of polarized follicles remain poorly understood. 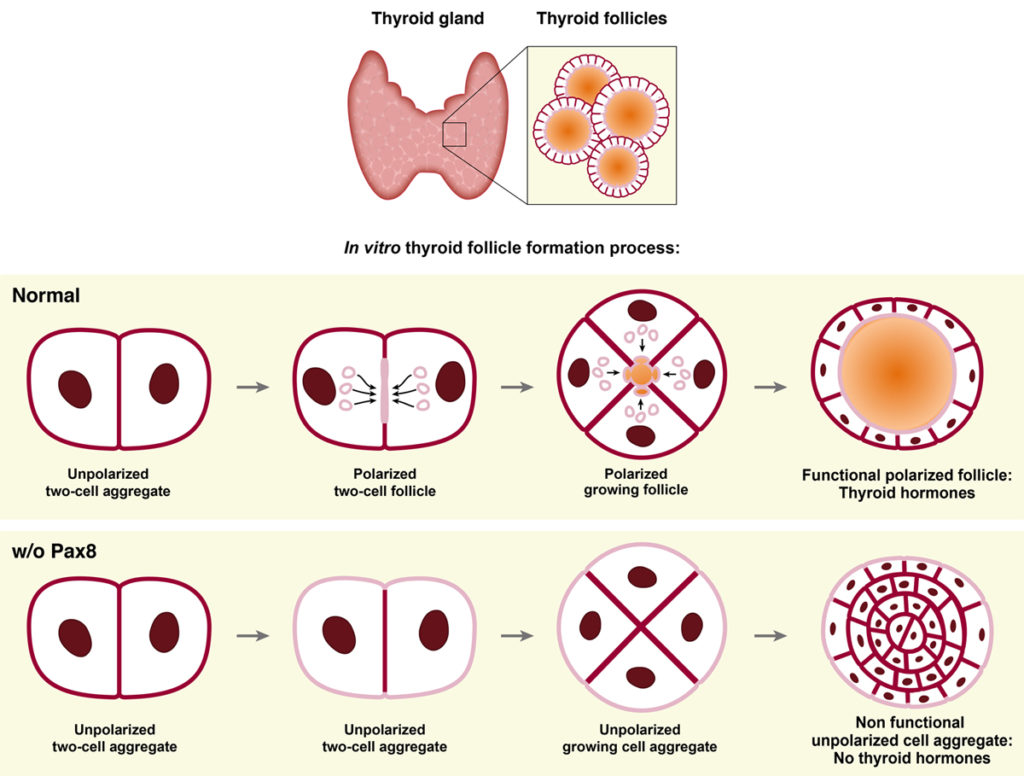 Fig. 1. Model illustrating in vitro Pax8-dependent follicle formation necessary for a functional thyroid gland. After the first cell division, a two-cell unpolarized aggregate is initially formed. ECM receptors localized at the cell membrane facing the ECM (in yellow) interact with ECM proteins allowing the follicular two-cell aggregate to sense the basal cue from the extracellular environment. Vectorial transport of vesicles carrying apical membrane cargo followed by their exocytosis at the cell–cell contact site gives rise to the apical domain and allows initiation of lumen formation. Cells keep dividing and polarize while lumen gradually expands giving rise to larger polarized follicular structures. In the absence of Pax8, ECM receptors and ECM proteins are downregulated impairing basement membrane assembly and its interaction with the cells. The absence of Pax8 also impacts targets that mediate apical traffic and membrane polarization impeding apical domain definition between the two cells. Consequently, lumen formation is impaired and an aggregate of unpolarized follicular cells is finally formed.

Refined organotypic 3D epithelial cell cultures that allow the organization of epithelial cells into structures similar to those of the organs from which they derive serve as useful in vitro cell models to explore mechanisms associated with epithelial morphogenesis. We developed 3D ECM cultures of Fischer rat thyroid (FRT) cells and mouse primary thyrocytes to study the mechanics of follicle formation. We found that the apical domain was specified between the apposing follicular cells at the first cell division, and was maintained in the center of the growing structure as cells proliferated. A nascent lumen was formed on the third day of 3D growth, which progressively expanded and coalesced into a small lumen filled with lumen-secreted glycoproteins at day 5. A fully polarized follicle-like structure with a large central lumen was formed by day 7.

To identify the molecular pathways involved in 3D follicle formation, we performed microarray-based differential expression analysis and compared the transcriptomes of FRT cells undergoing apical-basolateral polarization in 3D ECM cultures and equivalent 2D monolayer cultures. Among the up-regulated genes identified in 3D cultures was the thyroid transcription factor Pax8 and 71 genes positively regulated by Pax8, including those encoding for structural and functional cell elements. Expression of Pax8 was maximal on the second day of 3D growth, when apical-basal polarization takes place. Silencing Pax8 expression resulted in the mislocalization of apical markers towards the follicle periphery and an altered distribution of the cell cytoskeleton. After 8 days of growth, Pax8-depleted structures showed defective polarization and lacked a central lumen. Cadherin-16 (Cdh16), a transcriptional target of Pax8 that is expressed from the early stages of thyroid morphogenesis, was found specifically enriched at the initiation of apical-basal 3D polarization and its protein levels were dramatically decreased in Pax8-depleted cells. Silencing of Cdh16 expression resulted in defects in apical domain orientation, tight junctions and cell cytoskeleton localization and lumen formation, which were analogous to those observed in Pax8-depleted structures, pointing to the involvement of a Pax8–Cdh16 pathway in polarity acquisition and follicle formation.