With a little help from friends: how plastids aid the ER to deal with misfolded proteins

Almost a third of all proteins in eukaryotic cells are synthesized and folded in the endoplasmic reticulum (ER) before being secreted and redistributed to other organelles, such as the Golgi apparatus, lysosomes, and the plasma membrane. To maintain cellular proteostasis however, while the properly folded proteins are transported from the ER to their destinations, the misfolded and unfolded proteins have to be efficiently refolded or removed from the ER and targeted for the proteasomal degradation. A host of endogenous and exogenous stimuli trigger an accumulation of unfolded proteins in the lumen of the ER followed by an activation of intracellular signal transduction pathways, via a process collectively known as the unfolded protein response (UPR). The UPR is an established evolutionarily conserved adaptive cellular response that plays a principal role in maintaining the ER homeostasis in response to perturbations of the protein-folding environment, which may occur in response to biotic and abiotic stresses, in addition to other perturbations. There are two parallel branches of the UPR, and both of them are ultimately involved in the nuclear relocation of the transcription factors that either individually or in conjunction induce the expression of a core set of genes involved in realignment of the ER protein folding capacity. The coordination between the UPR as a rheostat for ER protein folding capacity and stress response pathways empowers cellular integrity in the face of a wide array of parallel or sequential challenges encountered. As such, tightly regulated interorgannellar communication signals play a central role in coordinating stress responsive transduction pathways. 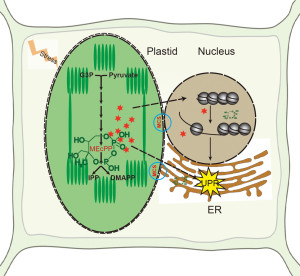 Fig. 1. Schematic model depicting alternative potential routes by which MEcPP potentiates induction of selected UPR genes. The MEcPP signal may function in the nucleus by first altering chromatin architecture and functional dynamics or by directly modulating a regulator of the UPR. The transport of plastidial MEcPP signal to the ER or nucleus may be facilitated via Membrane Contact Sites (MCSs).

We have previously identified a plastidial retrograde signaling metabolite methyl erythritol cyclodiphosphate (MEcPP), as a bifunctional chemical entity serving both as a biochemical intermediate for production of isoprenoids by the methyl erythritol phosphate (MEP) pathway, and also as a specific and critical plastidial retrograde signaling metabolite essential for coordination of expression of selected nuclear genes encoding plastid-localized proteins. However, the MEP pathway is present not only in plants, but also in eubacteria including the pathogenic strains such as Mycobacterium tuberculosis, and in the non-photosynthetic “apicoplast” plastids of parasites such as the malaria. Intriguingly, this stress-mediated induction of MEcPP levels both in plants and eubacteria strongly suggests some conservation of function of this metabolite as a stress sensor in regulating selected stress-responsive processes in both kingdoms.

Recently, a combination of proteomic and transcriptomic data analyses expanded the function of MEcPP in potentiating the induction of selected UPR genes. Importantly, the function of MEcPP as a plastidial signal inducing the UPR in the absence of ER stress was established via combinatorial approaches including molecular genetics and pharmacological application. The rapidity with which only one branch of the UPR was activated post MEcPP application suggests that MEcPP plays a direct and selective function in the ER, though it does not exclude indirect involvement of MEcPP in priming the response by various pathways including potential modification of the architectural and functional dynamics of chromatin. Regardless these finding unequivocally establish MEcPP not only as a biochemical intermediate of the MEP pathway, and an evolutionarily conserved stress-induced metabolite that functions as plastid-to-nucleus retrograde signal, but also as a multilateral interorgannellar communication metabolite that is essential for maintaining cellular homeostasis in response to stress. The potential modes of MEcPP function invites speculations as to how this small metabolite is transported from plastids to the site of function in the nucleus or the ER (Figure 1). One potential mode of transport may be via the transient physical connections that form between organelles, especially between the ER and the plastids through the membrane contact sites (MCSs), as has been previously predicted. Alternatively, MEcPP may be imported by a transporter or via membrane connections between plastids and the nucleus.

Gaining insight into the mechanism of MEcPP action could have far-reaching implications given both the absence of the MEP pathway in humans and the conservation of this essential pathway in plants, eubacteria and apicomplexan. Indeed, the structural and the functional conservation of MEP pathway enzymes is evidenced by the successful application of an Arabidopsis IspF protein (methylerythritol-cyclodiphosphate synthase) as a surrogate target used to identify an inhibitor “thiazolopyrimidine” of M. tuberculosis and P. falciparum enzymes. This finding further substantiates the relevance of exploiting the knowledge gained from the MEP-pathway in establishment of a platform for the development of novel and potent antimalarial and antibacterial drugs.