Sometimes, while observing the clouds in the sky, coffee foam or random decorative patterns, it is possible to be struck by the impression of clearly perceiving a face that is so well defined and yet so illusory. This phenomenon is called face pareidolia, i.e. the illusory perception of non-existent faces. How is this process made possible in the brain? Here it was investigated the neural mechanism responsible for the recognition of human resemblances in things and the existence of possible sex differences in this phenomenon.

Fig. 1. Examples of stimuli used in the study, as a function of category: faces (upper row), faces-in-things (middle row), and objects (lower row)

We compared the brain processing of: 1) real objects, 2) real objects that contained illusory facial features (‘faces-in-things’) with that of 3) faces. We also obtained behavioral data related to face-likeness ratings of the objects as a function of the viewer’s sex by testing a group of 10 University fellows. Overall, women attributed higher face-likeness scores to objects than men, thus showing to be more inclined in perceiving face patterns where none actually existed. After the behavioral testing, the electroencephalogram was recorded in 26 male and female university students. They were shown 390 colored pictures of different objects and faces randomly mixed to rare pictures of animals, to which they had to respond by pressing a key as accurately and quickly as possible. Visual evoked potentials were extracted from EEG signals and analyzed. The data showed that men and women did not differ in the way the occipital/temporal cortex (devoted to visual analysis) processed the three stimulus category. They brain clearly distinguished faces from objects, and face-devoted brain regions were somewhat stimulated by faces-in-things thus providing the neural basis for this illusion (called face pareidolia).

However, the same information, quickly provided to anterior brain area for creating a conscious representation was interpreted very differently by the female and male mind.  A brain potential reflecting face processing over the frontal areas, named VPP peaking at about 150-190 milliseconds, was measured and compared across stimuli and sexes. It turned out that VPP was of equal amplitude to faces and faces-in-thing in women, thus indicating the same level of neural firing due to stimulus face-likeness. Conversely, in men, this response was much attenuated during perception of faces-in-things, thus indicating a mental representation of these stimuli as actual objects (non-living entities). The analysis and reconstruction of inner brain generators showed that only in the women visual processing of faces-in-things (real objects otherwise perfectly canonical) stimulated regions involved in the affective processing of social information (the right Superior Temporal Gyrus, the posterior Cingulate Cortex , the left orbitofrontal cortex). In the men, posteriorly, activation of the right precuneus (involved in stimulus structural encoding and visuospatial processing) was observed, which suggests a lack of processing of the socio-affective content of the incoming visual input in the male brain. 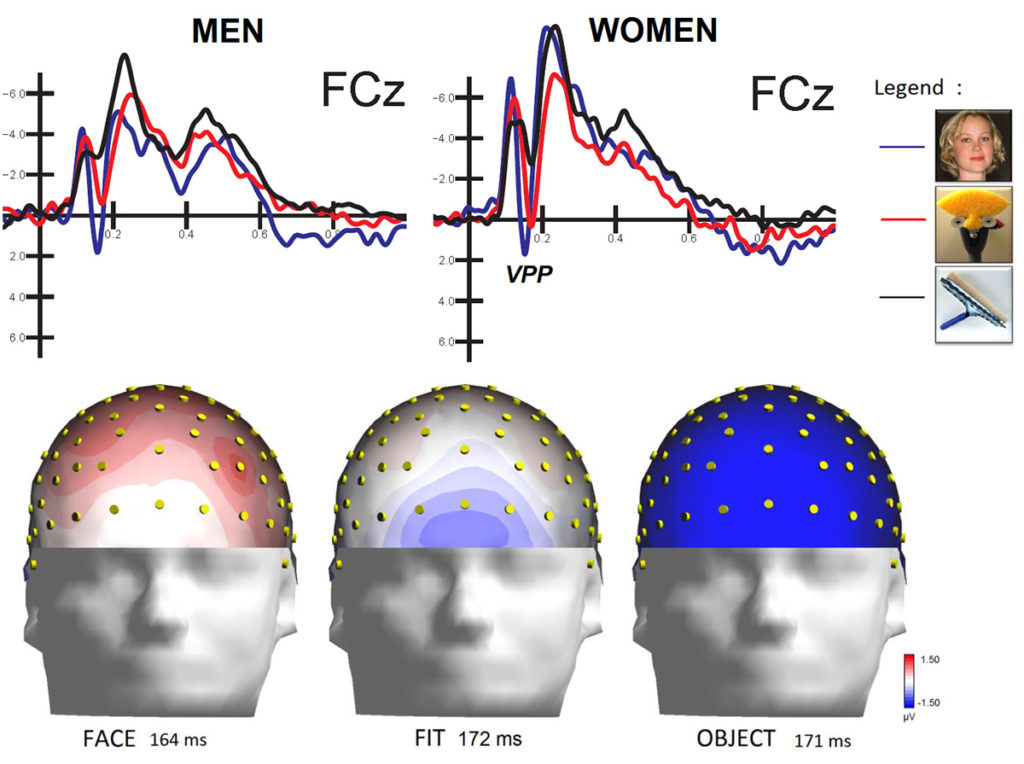 Fig. 2. Brain electrical potentials recorded at fronto-central sites in response to the three stimulus types. The peak named VPP, reflecting face recognition, was of equal amplitude to faces and faces-in-things in women, while it showed a differentiation in men. The topographical maps show the surface voltage distribution of VPP to stimuli regardless of the sex of the viewer.

Anteriorly, the perception of faces-in-things stimulated the activation of the orbitofrontal cortex but the signal strength was considerably smaller in men (4.98 nAm) than in women (13.2 nAm). This region contains face-responsive neurons involved in the processing of facial expressions and it is assumed that here it is abstractly represented the presence of a living entity with a face, thoughts and feelings.  Its strong activation in women might index that the female brain is more inclined to anthropomorphizing, which fits with the notion of sex differences in empathy and interest for social information.

Women are better at seeing faces where there are none: an ERP study of face pareidolia.
Proverbio AM, Galli J
Soc Cogn Affect Neurosci. 2016 Sep