Q fever is an infectious disease that causes flu-like symptoms such as fever and headache, often accompanied by pneumonia. In addition, Q fever can continue to cause symptoms, long after patients became infected. Fatigue is one of the problems that affects many patients, sometimes even up to ten years. One might expect that these health problems also have an impact on patients’ ability to work. The aim of this study was to get more insight in work status of Q fever patients during the first year of their illness. We compared this to the work status of patients with Legionnaires’ disease, to find out how the impact of these diseases compare to each other. In addition, we looked at personal characteristics that are more often found in patients with problems in their work status. 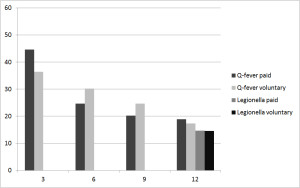 Fig. 1. The proportion of working patients (paid and voluntary) who worked less than before their illness (Q fever or Legionnaires’ disease), due to their illness.

This study was carried out in the Netherlands, where a large outbreak of Q fever took place between 2007 and 2011. Q fever patients were invited to fill out a questionnaire, at 3, 6, 9 and 12 months after the start of their disease. Patients with Legionnaire’s disease filled out a questionnaire after 12 months only. With this questionnaire, we obtained information about the number of hours that patients worked before and after their illness, about symptoms they currently experienced and about stages of grief in their disease process (such as sorrow and acceptance). In addition, the questionnaire contained questions about demographic (e.g. age, gender), lifestyle (smoking status, alcohol consumption) and medical factors (e.g. other health problems, treatment that patients received).

The most common symptoms in both groups of patients at 12 months were severe fatigue and concentration and memory problems. Q fever patients also suffered often from headache and muscular pain, and patients with Legionnaires’ disease from respiratory problems and pain in the joints. Q fever patients had on average more denial and resistance towards their disease than patients with Legionnaires’ disease, and less acceptance. Personal characteristics that were more often found in Q fever patients with problems in their work status were having symptoms, having more sorrow, having smoked before, not drinking any alcohol and following long-term treatment for Q fever.

In conclusion, Q fever patients become gradually less affected in their work status, between 3 and 12 months after their infection. However, one in five patients still work less than before their illness after one year. The impact of Q fever on work is comparable to the impact of Legionnaires’ disease, although Q fever seems to affect patients slightly more. The results are of importance to occupational and insurance physicians, who should be aware of the impact on the long-term work status of both these diseases.