3,3′-diindolylmethane is a novel signalling molecule in Canola plants

Glucosinolates are organic compounds which exist in the Brassica family of plants and which are derived from glucose and amino acids and consists of sulphur and nitrogen in their structure. Glucosinolates exist as many different compounds in plants which can be distinguished by the different chemical side group linked to a central carbon. In the Brassica family of plants, glucosinolate precursors are often localized in myrosin cells for separation from the enzyme myrosinase. When plant cells are damaged, the myrosin cells gets damaged allowing the myrosinase enzyme to interact with glucosinolates. During this interaction, myrosinase removes the glucose from the glucosinolate and the remaining molecule spontaneously converts into thiocyanate, isothiocyanate or a nitrile. The final conversion in the catalysis, is often dependent on the given physiological conditions such as pH and the presence or absence of cofactors. The final products of the reaction are often toxic and therefore glucosinolates are released as defence molecules against herbivore action. 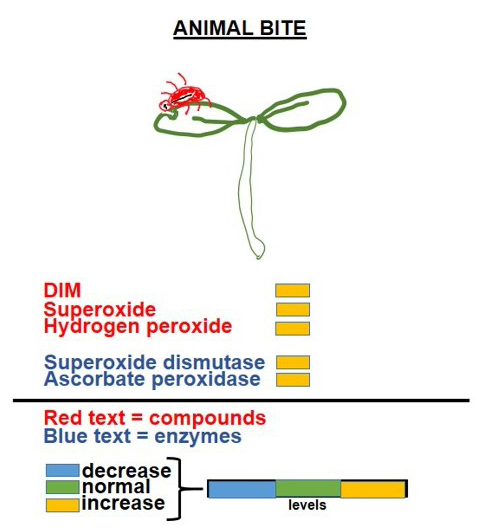 One isothiocyanate compound namely 3,3’-diindolylmethane (DIM) have been extensively studied in mammalian systems especially in cancer research. This molecule effectively inhibit the progression of a wide variety of cancers when tested against cell lines. However, knowledge about the role of DIM in Brassica plants are non-existent. Therefore, we developed an experiment to test the responses of Brassica napus (Canola) to DIM. Our hypothesis was based on what is known to happen under herbivore action (e.g. animal feeding) (Fig. 1) where the damage of the plant cell will result in DIM release. Furthermore, during this damaging process, a burst of reactive oxygen species (ROS) is normally expected. The production of ROS will often trigger changes in antioxidant enzyme activity in order to control the levels of ROS to below toxic levels. ROS does not only function in plant cell senescence responses but also perform key signalling roles in plants. Two ROS compounds namely superoxide and hydrogen peroxide have known signalling roles in seed germination as well as plant cell growth. However, to control the levels of these two ROS compounds within the range for signalling rather than cell death, antioxidant enzymes such as superoxide dismutase (which breakdown superoxide) and ascorbate peroxidase (which breakdown hydrogen peroxide) must be activated. Therefore, we hypothesized that a possible link could exist between DIM release and ROS production and if we could control the level of DIM through exogenous application then we should trigger ROS responses possibly within the signalling range. Furthermore, to control the range of ROS production we expected activation of antioxidant enzymes. This signalling cascade could lead to an increase in canola seed germination as well as seedling shoot growth.

In our study we observed that under normal conditions superoxide and hydrogen peroxide remain at levels below the toxic range (Fig 2.A). Subsequently, superoxide dismutase and ascorbate peroxidase activities remained at levels as previously described for canola seedling shoots. However, when we applied DIM to our canola seeds, we observed increased seed germination when compared to the control plants. When we allowed our germinated seeds to grow into seedlings, we observed that the DIM treated seedlings were bigger than the control seedlings (Fig 2.B). When we performed biochemical assays for ROS production we observed an increase in superoxide content as well as hydrogen peroxide content (Fig 2.B). Furthermore, we observed increases in superoxide dismutase and ascorbate peroxidase activity (Fig 2.B). 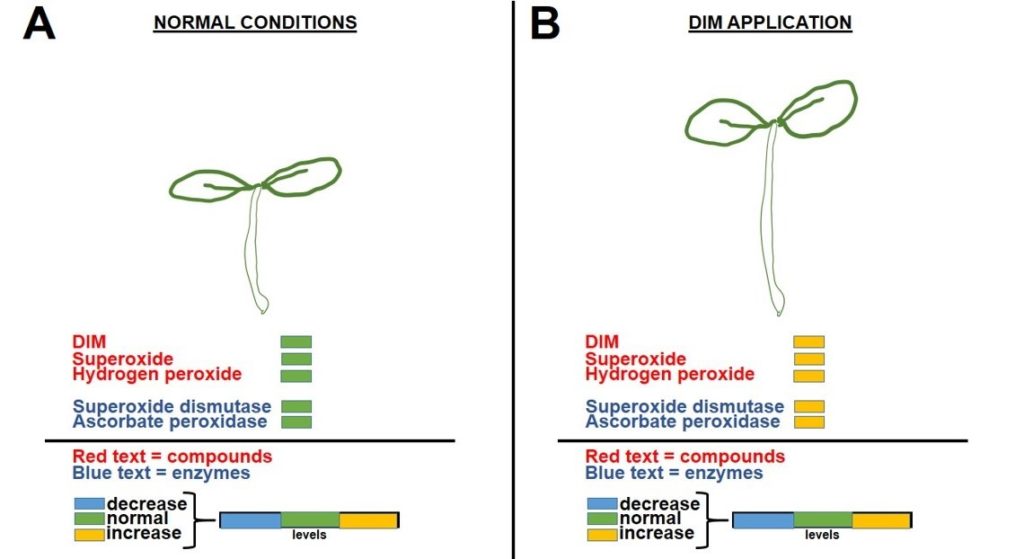