A novel perspective on schizophrenic-like symptoms

One of the key questions in neuroscience involves understanding how the brain processes cognitive functions – like learning new information, making adaptive decisions, and engaging in social interactions with others. We know that these activities occur across widely distributed brain networks that are governed by the cortex – the outer part of the brain that is most developed in humans. Yet we still need to understand how discrete regions of the cortex communicate with each other during these activities. To address this, our research investigated how the role of the mediodorsal thalamus (located in the middle of the brain) is involved in these processes, as it is heavily interconnected with the prefrontal cortex, located at the front of the brain.

We know the mediodorsal thalamus is important for learning and making decisions, although its precise influence is not fully understood. Some patients with cognitive deficits can have noticeable changes in their brain connections that link the mediodorsal thalamus and the prefrontal cortex together, suggesting that communication between these areas might be important in cognitive functions. 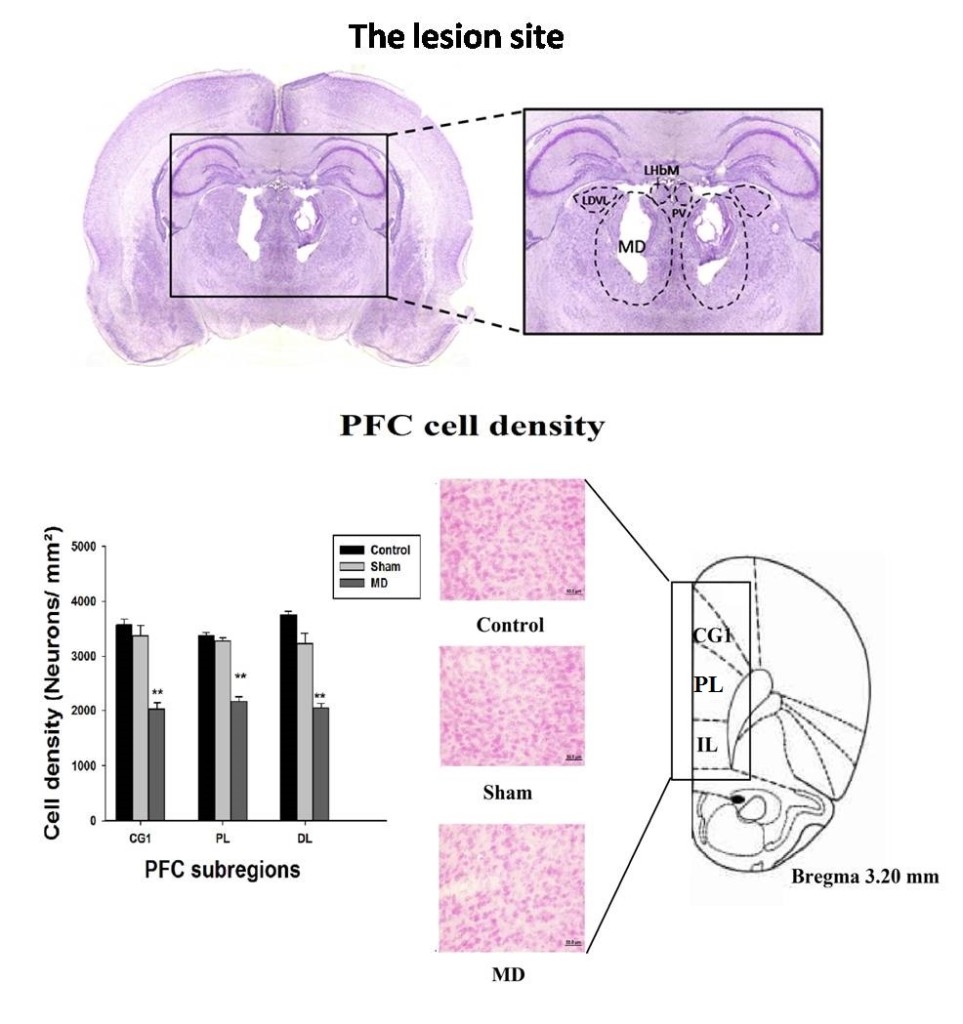 Interestingly, neuroimaging and postmortem neuropathology from schizophrenic patients indicate that the mediodorsal thalamus is often shrunken, with a loss of neurons in this region. Schizophrenia affects 1% of the world’s population and it is associated with a myriad of behavioral, cognitive and brain state changes. Further, schizophrenia is linked to brain development, with brain changes occurring very early in life, and symptoms of schizophrenia becoming apparent from the mid teens onwards.

In the current study, Ouhaz et al. 2015, we assessed whether early postnatal brain changes within the mediodorsal thalamus caused behavioral and cognitive alterations in young adult rats. Rats at postnatal day four received discrete damage to neurons within the mediodorsal thalamus under general anesthetic. Other groups of rats were controls that received anesthesia only; on recovery they were returned to their mothers until weaning. Seven weeks later, all rats participated in cognitive and behavioral testing.

Rats with damage to the mediodorsal thalamus had increased anxiety-like behavior when compared to the control groups of rats. They also showed impaired learning during performance on different cognitive tasks and they were slower to adapt their behaviors as the task requirements changed. These rats also showed decreased locomotor activity and engaged in less social interactions with control group rats.