Polypeptide with a repeating sequence has attracted particular attention as a promising candidate of innovative structural materials. Fibrous proteins such as fibroin, collagen, and elastin are the representative class among natural polypeptides with specific repeating sequence. For the creation of new structural materials, we became intrigued by the development of sequence control method for polypeptides. Figure 1 shows the synthetic approaches to alternating peptides. Alternating copolymerization technique for polypeptide has not been sufficiently developed. Polycondensation of two kinds of amino acids yields random copolymer. Therefore, dipeptide has been conventionally used as the monomer of alternating peptides. However, the preparation of the dipeptide monomer itself is highly challenging. Also, introduction of arbitrary functional group to dipeptide skeleton is very difficult. Regarding such issues, we conceived the change of connecting position on polycondensation. If two types of monomers (A and B) are available and chemo-selectively react with the appropriate reaction sites, the reaction would give the alternating peptides in a simple polycondensation manner.

Thus, we selected Ugi four-component condensation reaction (Ugi’s 4CC) as the elementary reaction for the alternating polymerization (Fig. 2). In a typical Ugi’s 4CC reaction, a stoichiometric mixture of aldehyde, amine, isonitrile, and carboxylic acid produces the corresponding dipeptide (Fig. 2). The reaction starts with the condensation between an aldehyde (R1CHO) and an amine (R2NH2) to give an imine. The nucleophilic addition of an isonitrile (R3NC) to the imine is followed by the addition of carboxylic acid (R4COOH) to I to afford an intermediate II. Subsequent acyl migration and tautomerization give the dipeptide. These steps require no catalyst. Our idea for the new polymerization technique is to connect R3 and R4. This connection between R3 and R4 of the product would indicate the structure of the alternating peptide. Therefore, the reaction of imine (R1C=NR2) with the ambident molecule bearing both isonitrile and carboxylic acid (HOOC-R-NC) could proceed to the unprecedented polymerization to give the alternating peptide without catalyst. This idea is very simple, but there is no report about Ugi’s 4CC-based polymerization. The reason would be attributed to the chemical unstability of ambident molecule. Upon heating, addition reaction of carboxylic acid to isonitrile is possible as a side reaction. Recently, we found that the potassium salt of ambident molecule (KOOC-R-NC) is isolable as a stable solid. The ambident molecule can be generated in situ by the neutralization with non-nucleophilic acid. The reaction of imine with the neutral ambident molecule in i-PrOH proceeded to polymerization to give the alternating peptides without the need of a catalyst. 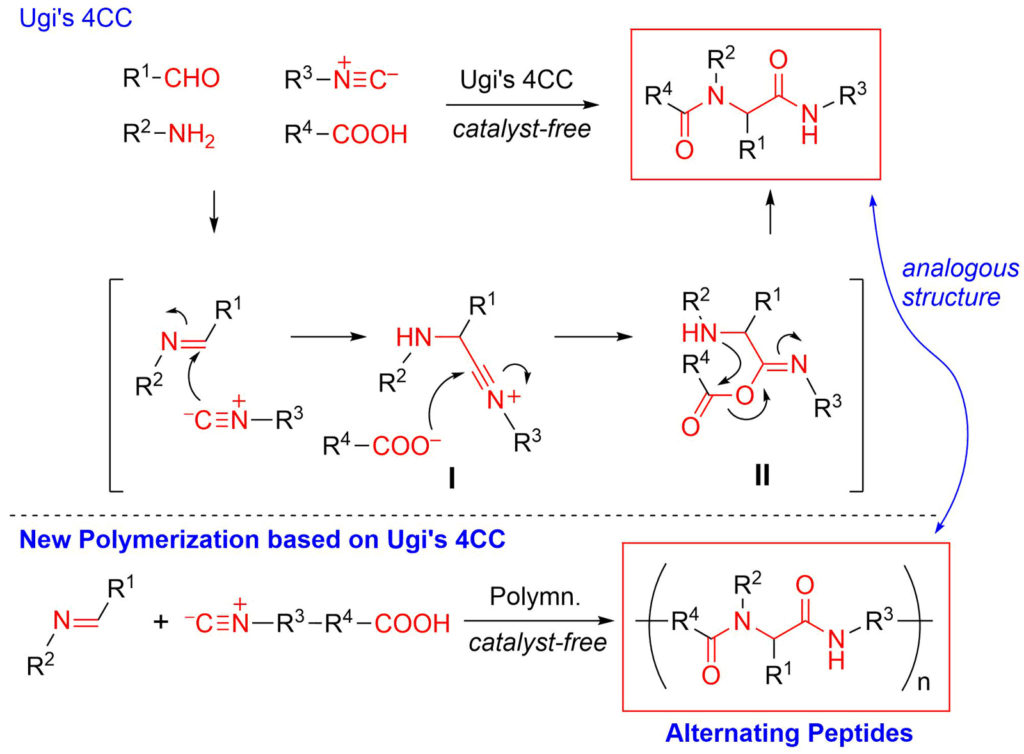 In our report, we describe the scope and limitation of Ugi’s 4CC-based polymerization, where we also found that the polymerization efficiency can be qualitatively estimated by the diffusion coefficient obtained in the DOSY spectra. The present method may provide several insights into not only material innovation exploiting alternating peptide skeletons but also new click polymerization techniques in future. We will also present some other intriguing invention based on this chemistry to our community soon.