Breast cancer has the highest incidence rate of all cancers in women worldwide. Although early breast cancer generally has an excellent prognosis, breast cancer in young women (under the age of 35) is associated with a high risk of systemic disease at long-term follow-up. Young women tend to be diagnosed at a later stage with highly proliferative, high-grade tumours with the presence of lympho-vascular invasion. CpG sites are regions of DNA where a cytosine nucleotide is followed by a guanine nucleotide in the linear sequence of bases, they occur frequently in CpG islands. When a methyl group is added to the cytosine in a GC site it became methylated and may change gene expression if located in a regulatory region. MicroRNAs (miRNAs) are short non-coding RNAs that act as important regulators of gene expression as part of the epigenetic machinery, in turn miRNAs can also be epigenetically modified by DNA methylation, therefore, their expression may be affected. Our study aimed to identify methylation differences in miRNA encoding genes in breast cancer affecting women under 35 years old (BCVY) compared with older women with breast cancer (BCO), in order to identify potential biomarkers in these patients (Fig. 1a). 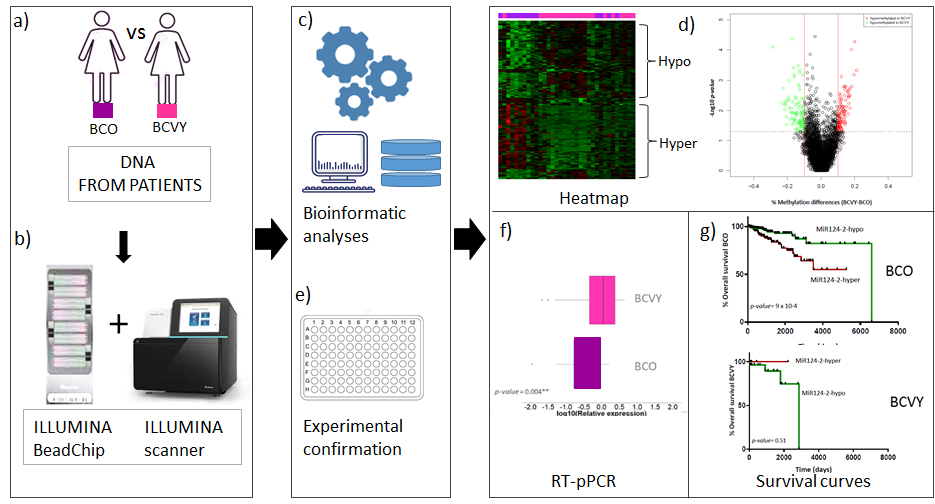 To this end we used a Methylation array which contains 9,961 CpG site regulators of miRNA-encoding genes (Fig. 1b). We identified several methylated CpG sites in BCVY that regulated their target miRNA encoding genes. Among them, about half were hypomethylated and the other half hypermethylated in BCVY. Bioinformatic analyses (Fig. 1c) showed that methylation differences were able to distinguish samples from young from elder patients with breast cancer independent of expression of Oestrogen receptor (a good indicator of luminal vs triple negative subtypes) (Fig. 1d). Additionally, bioinformatics comparisons with several other databases with methylation and transcriptomic data validated 5 of the CpG selected (Fig. 1e). From those five miRNAs (miR-9, miR-124-2, miR-184, miR-551b and miR-196a-1) only miR-124-2 shows a significantly different gene expression when analysed by quantitative real-time PCR (Fig. 1f).

MiR-124-hypomethylation presents significantly better survival rates for older patients as opposed to the worse prognosis observed in BCVY, identifying it as a potential specific survival biomarker in BCVY (Fig. 1g). The mature miR-124, which is associated with a CpG islands, has been described as a biomarker in colon, stomach, liver, leukaemia and cervix cancers. MiR-124 exerts a tumour suppressor effect by targeting cyclin-dependent kinase 6, and epigenetic silencing of miR-124 leads to CDK6 activation and Rb phosphorylation. Interestingly, our results show a hypomethylation of miR-124-2 gene in BCVY compared with older patients and a higher miRNA expression. Additionally, the miR-124-2 has been found to be the most abundant miRNA expressed in neuronal cells and their differentiation. Neuronal elements have been described that are related to cancer microenvironment promoting cell growth, although the mechanisms mediating neuronal influences on cancer growth and progression are likely incompletely understood. Previous group studies in BCVY have shown that most of the pathways deregulated in this group were related to neuronal-system processes

The present work is the first to analyse methylation of miRNA-encoding genes using the EPICarray in breast cancer samples from young women, and the association with miRNA expression. Our main finding is the relationship of miR-124-hypomethylation with significantly better survival rates for BCO as opposed to the worse prognosis observed in BCVY, identifying it as a potential specific survival biomarker in this group.