Titanium dioxide (TiO2) antibacterial surfaces are growing continuously in the health care areas. This is an important application since infectious biofilms are the main source of human infections in hospitals, schools and public places. When bacteria contacts some metals/metal oxides it can genetically generate a resistance to it. Not as other metal oxides (silver, copper…), TiO2 disinfection does not lead to bacterial resistance and prevents the formation of harmful biofilms. TiO2 is a semi-conductor that, under light excitation, will generate intermediates/radicals leading to kill bacteria in its vicinity.

Many studies have been reported over the last decades involving the preparation of colloidal/powder TiO2 for antibacterial purposes. Also antibacterial films on glass and solid surfaces were prepared with different techniques. Some of these techniques do not allow deposition of TiO2 on polymeric surfaces (textile, polyethylene, latex…) since they heat-up during the deposition, which can destroy the polymer. We focused during the last years on extensive programs involving TiO2-modified polymers by different methods. Films prepared in our laboratory by a deposition technology called magnetron sputtering showed an effective bacterial inactivation under low intensity light. Solar light can as well be used to activate TiO2-coated polymers to inactivate/kill bacteria. 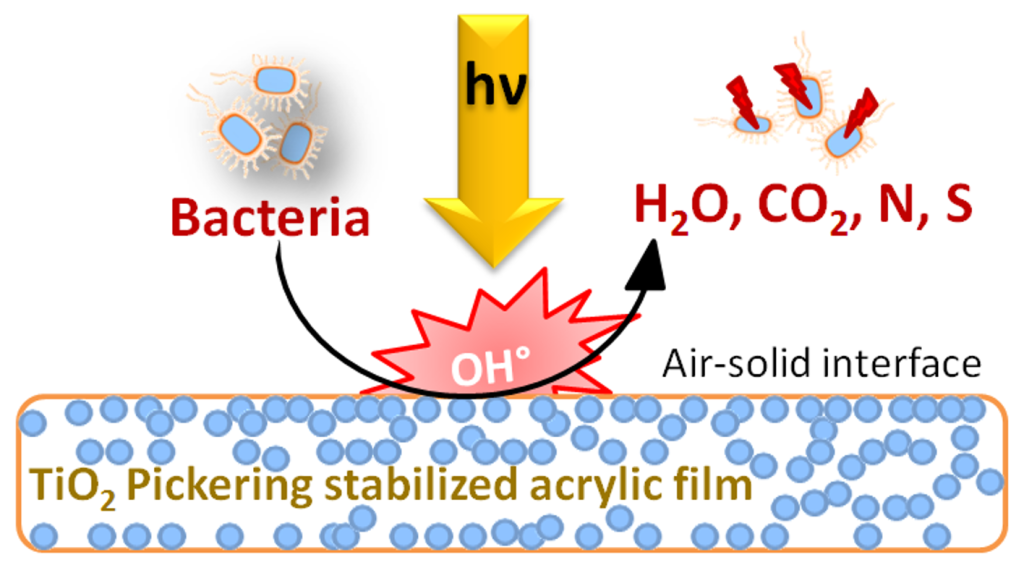 The scheme shows the mechanism of bacterial inactivation on Pickering latex stabilized by TiO2 nanoparticles leading to kill bacteria in the minute range.

When bacteria is contacted with antibiotic for long time, it can create a resistance to this antibiotic. For this reason, polymers presenting fast bacterial inactivation are needed at the present time due to the increasing resistance of pathogenic bacteria to synthetic antibiotics. Deposition of TiO2 on polymer films depends on the polymer functional/chelating groups, surface charge and surface hydrophilicity and the size of the TiO2 nanoparticles. Polymers like polyethylene and polyester pretreated by plasma to induce surface polar groups are able to bind additional TiO2 compared to non-pretreated polymer surfaces. A bottom-up approach to produce films with nanoparticles (inorganic nanoparticles) is the production of hybrid films (organic/inorganic) during the polymerization process. Among the different techniques that can be used to produce these nanocomposite polymeric dispersions. This method has shown a highest success and versatility because hybrid polymer particles with complex morphologies can be tailored. This technique is environmentally friendly and allows a better control of the nanoparticles dispersion throughout the polymer matrix. Among all the polymer/inorganic nanoparticles hybrid morphologies that can be obtained by this method, Pickering stabilization allows obtaining a layer of nanoparticles at the vicinity of the surface of the polymeric film after film polymerization. Pickering latexes are usually stabilized by inorganic fillers such as silica nanoparticles and clays. Nevertheless, in the last decade TiO2 nanoparticles have also been employed as polymer particle’s stabilizers. Under low intensity light irradiation these films can be potentially used as baby-bottles, food packaging materials with low cytotoxicity (biocompatibility) and long-term operational stability. These materials initiating a new approach for antibacterial surfaces without harmful release of heavy metals and/or metal oxides. More focused cytotoxic studies on the prepared material are needed to overcome accidental mechanical instability.