Parkinson’s disease is a progressive neurological disorder that affects mobility and is commonly characterized, in advanced stages of the disease, by instability and falls. Falls are a major reason for hospitalization in Parkinson’s patients and may lead to serious complications such as fractures. These problems have important social and economic consequences for patients and families. The National Parkinson Foundation previously reported that the use of psychotropics (which are medications used for depression, psychosis, as mood stabilizers, or as brain stimulants) could be associated with falls. However, we didn’t know which subtypes of psychotropics affected patients.  In our research study, we investigated the association between these types of drugs and falls in Parkinson’s patients. 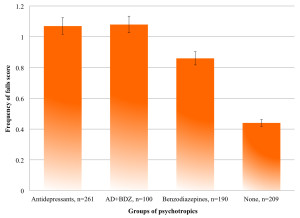 Fig. 1. Comparison of mean frequency of falls score between psychotropic drugs subgroups included in the final regression analysis model. The rate of falling is only significantly different with those taking antidepressants alone when compared to those not on psychotropics.

Six hundred and forty seven subjects were studied, where 40% (258/647) had a history of falls. As we might expect, the fallers had indicators of a more advanced disease, such as longer disease duration and higher scores on the clinical evaluation scales (Unified Parkinson Disease Rating Scale) when compared to non-fallers. Our analysis showed that those patients who were falling more frequently, were on antidepressants alone when compared to those not on these medications. No differences in frequency of falls were observed between those patients taking other psychotropics such as benzodiazepines, antipsychotics, or brain stimulants. Antidepressants have different actions in the brain, however, how these medications can affect posture and locomotion leading to falls remains unknown. Many Parkinson’s patients will suffer from depression during their disease. Does the associated risk of falling worth the price of antidepressant efficacy? There is definitely a need to better understand how these medications affect patients.

The use of antidepressants was associated with falls in our Parkinson’s group of patients. However, factors related to a more advanced disease need to be considered before claiming these drugs as causative.