For twins, the identity is a “yes” or “not” intrinsic property: they can be identical (monozygous) or non-identical (heterozygous). Classical identical twins can always be distinguished (at least by their mother!). In fact, it is always possible to identify them either attributing a physical label (e.g. differently colored nursery id bracelets), which doesn’t modify their behavior, or by watching them very closely. But what about Quantum identical twins? In quantum physics, labels (names) are quantum numbers and address the twins rendering them non-identical. That is, the bracelets must necessarily differ, e.g. in weight, so to influence twins’ gaits distinguishing them. As a consequence in quantum mechanics, if we wish to maintain twins identical, it doesn’t make any sense to give them different names and even the love of their mother can be not enough to know who’s who! Does it mean that quantum love is less than classical one? We wouldn’t put it like that! 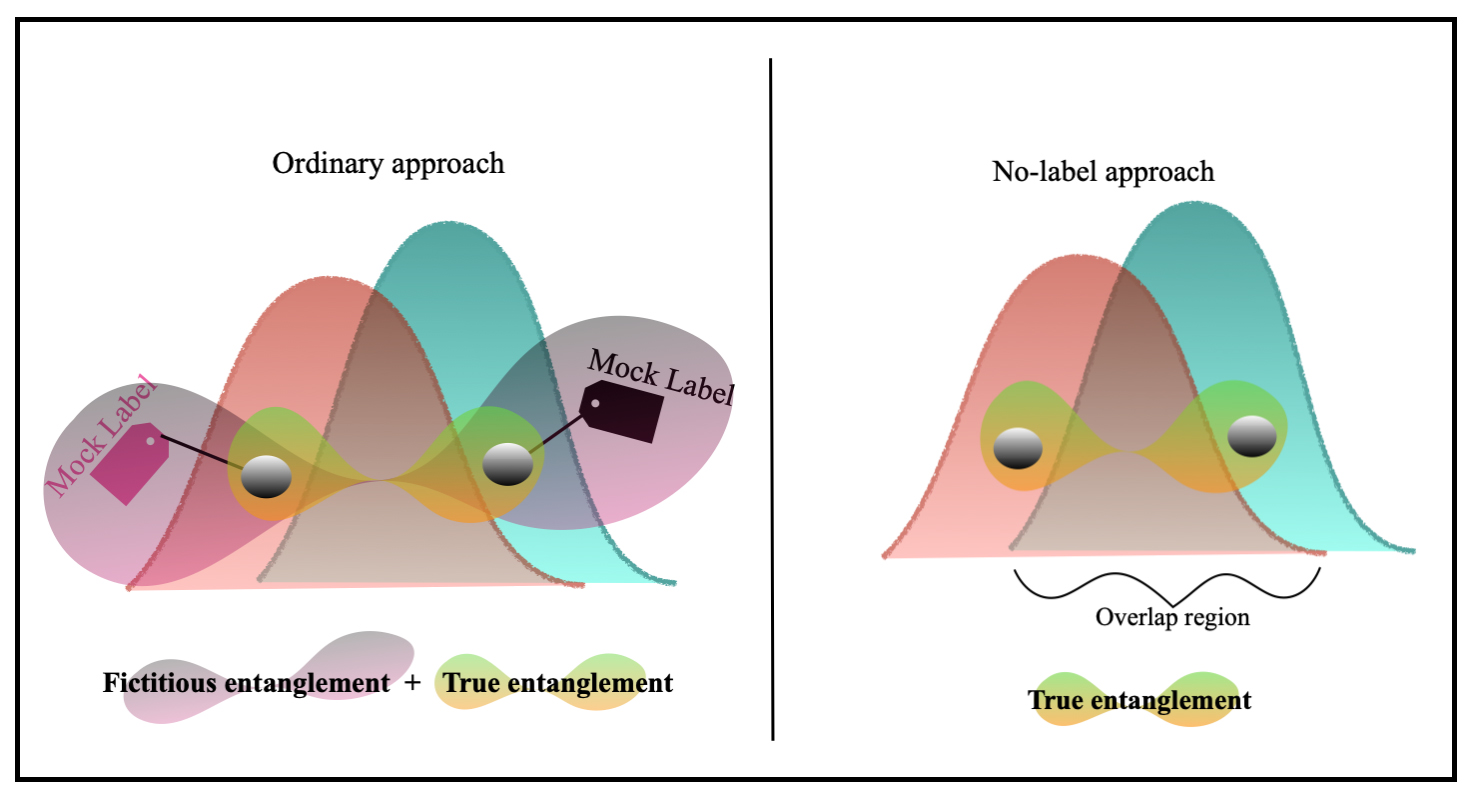 Like our quantum twins, quantum identical particles (e.g. electrons, photons,…) have no names. If watched, they do not follow deterministic trajectories (they are delocalized in space) and, if they spatially overlap, within the overlap region they are indistinguishable. However, in quantum mechanics the ordinary mathematical approach treats them as non-identical and mock (unphysical) labels are assigned to them. Since the physics must not depend on these labels, also mathematics has to neutralize their effects by using some strategies which typically work well. However, combination of these labels and strategies messes with the study of entanglement of identical particles. The latter represents a very fundamental kind of quantum correlations, intertwining particles in such a way that an observation on one particle instantaneously modifies the properties of the other, no matter how far they are (Einstein’s “spooky action at a distance”). On the other hand, entanglement results to be crucial to implement quantum technologies and communications. The mess mentioned above makes it difficult, for instance, to separate the true usable entanglement from the fictitious one due to mock labels.

We have proposed an approach to deal with identical quantum objects without ever involving mock labels. It allows us through measurements not only to straightforwardly and unambiguously characterize their true entanglement alone (Fig. 1), but also to identify how indistinguishability affects quantum correlations. It comes out that the pure quantum property of indistinguishability can play a role also when it is incomplete, that is when particles overlap in space only partially.

What has the incomplete indistinguishability to do with our twins? Let us suppose that each classical twin is in her own bedroom with a door opening into the kitchen. Each door has a different doorbell and bedrooms are non-communicating. Mum hears a doorbell ringing. Returning into the kitchen she finds some marmalade is missing. Can she know which twin has opened the jar of marmalade? Classically she knows the culprit is the twin occupying the room whose doorbell rang. On the other hand, each quantum twin can occupy simultaneously both bedrooms with different probabilities. Thus it is not possible to associate a given doorbell to a particular twin (Fig. 2). 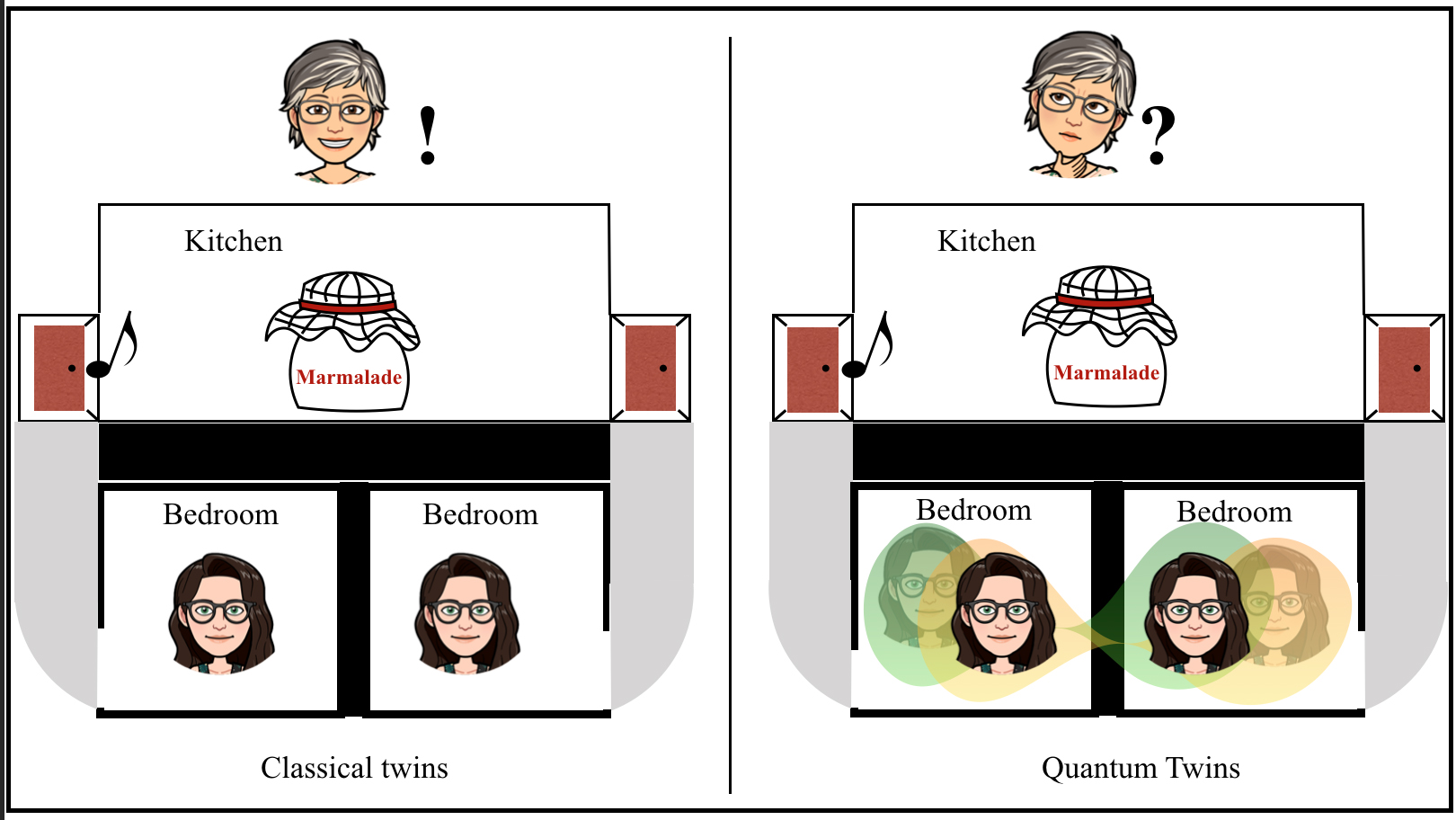 Further, nature presents us two classes of quantum identical particles: the first (bosons) are friendly and can live all together in the same quantum configuration; the second (fermions) are asocial and they love to share their quantum state with no other twin particle. These two classes are treated, in the standard way, differently. Our formalism has the advantage to treat bosons and fermions on the same footing making to emerge the role of their different social skills (statistics) in the implementation of quantum technologies.