The increased occurrence of extreme climatological, hydrological, and meteorological events (EWEs) and Climate-sensitive Disasters (CSDs) (e.g. floods and storms) in Latin American countries (LACs), and their primary impacts on human wellbeing should be considered carefully. This requires an effective monitoring and assessment of the interlinked nature of human wellbeing, the vulnerability of the life-supporting systems related to environmental health, and the economic and environmental sustainability. 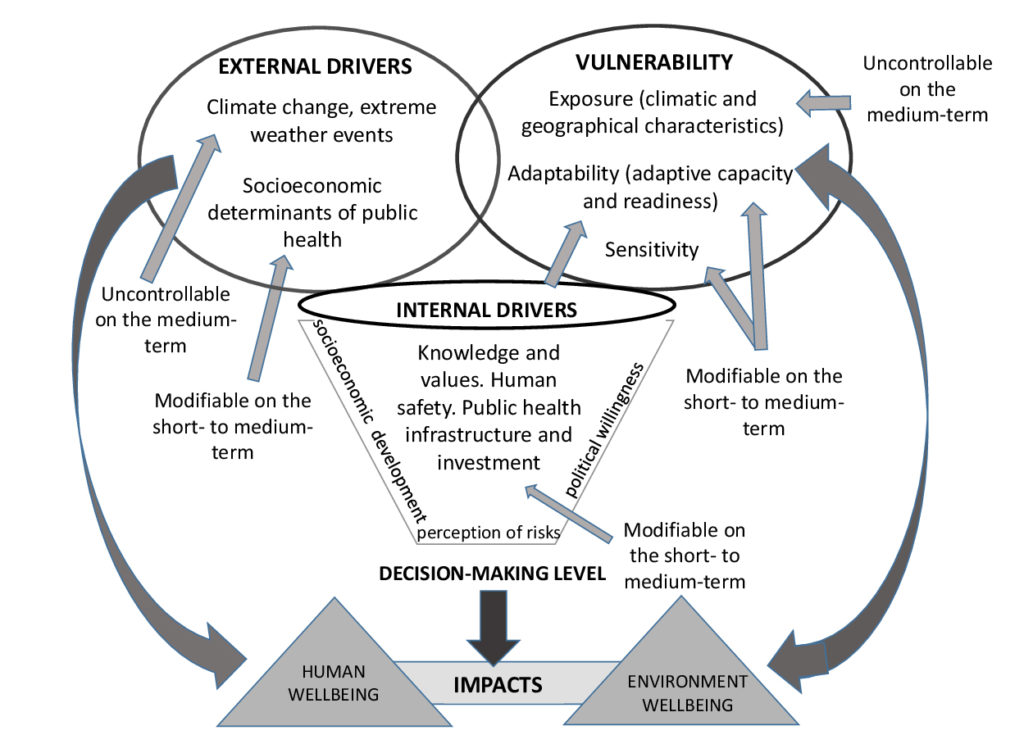 The rather low level of development and adaptive capacity of most LACs makes it a highly vulnerable region to climate change, EWEs, and CSDs. The vulnerability and development indices and the International Disaster Database suggest that the impacts of CSDs are primarily related to the socio-economic determinants, such as the Human Development Index (HDI), poverty rate (%), and health inequalities (e.g. health investments).

The analytical framework of the assessment is Drivers-Vulnerability-Actions interactions (DVA-I) (Fig. 1). The research question is: Are the direct human impacts of CSDs primarily due to their likely increase in frequency and intensity, or to the intrinsic human and socio-economic determinants of wellbeing and health inequalities?

The elements of the DVA-I are:

External drivers: climate change and extreme weather events; socio-economic determinants of public health, which are assumed as uncontrollable on the short- and medium-term (2025–2040) at the local level.

Internal drivers: knowledge and values; human safety, public health infrastructure, and investment), which are assumed as controllable on the short-term but dependent on the level of development, perception of risks, and political willingness.

The vulnerability is composed of the climatic and geographical factors of exposure, the percentage of population affected by climate-hazards, and the adaptive capacity and readiness.

The actions relate to country-level decision-making. 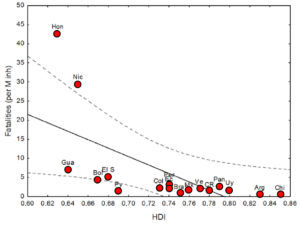 The number of fatalities (per million inhabitants) is directly associated with the percentage of poverty (%), and negatively with the HDI (Fig. 2), health vulnerability and investment indices. CSDs worsen health disparities; the gaps in the provision of services are associated with the persistence of low development levels.

The disparities in the wellbeing and health determinants are mutually-aiding with the CSD-related human impacts. The Total Affected People (TAP) indicator varies from less than 10% (Chile, Ecuador, Uruguay, and Venezuela) to more than 30% (Guatemala, Honduras, Nicaragua and Peru).

The less/more impacted countries are the ones with the highest/lowest development level and expenditures in Public Health, and less / more exposure and vulnerability indices namely Chile, Uruguay, Costa Rica, Panama and Argentina / Honduras, Nicaragua, Guatemala and El Salvador.

Some cost-effective adaptation measures are the following:

Short-term: The improvement of public awareness, preparedness and response infrastructure, and the implementation of linked climate adaptation and disaster risk reduction management.

Medium-term: Increase in health expenditures and the reduction of disparities.