Carbon is all around us in different forms ranging from molecules to solids, minerals and nanostructures. Organic chemistry classifies alkanes, alkenes and alkynes hydrocarbons according to the different hybridization state of carbon atoms (sp3, sp2 and sp1, respectively) which give rise to spatial, planar and linear arrangement of molecular bonds (e.g., the case of ethane, ethylene and acetylene). 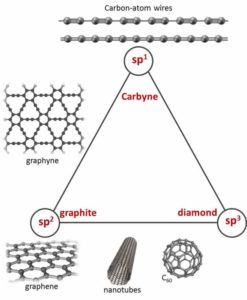 Fig. 1. Ternary diagram of carbon nanostructures classified according to the hybridization of carbon atoms.

In nature, solid forms of pure carbon (i.e., allotropes) are diamond and graphite corresponding to sp3 and sp2 hybridization while the allotrope corresponding to sp1 carbon (i.e., carbyne or linear carbon) is still an elusive material. In the last 30 years the discovery of carbon nanostructures with different dimensionalities has led to graphene (one planar layer of graphite) as a 2-D material with outstanding properties, to single wall carbon nanotubes as quasi 1-D systems that can be ideally obtained by rolling up graphene and to C60 fullerene as a 0-D system with a closed cage resembling a soccer ball (Fig. 1). Such intense research has driven the interest to finite-length linear atomic chains of carbon atoms with sp1 hybridization as ultimate 1-D systems.

Here, we summarize the present status of the research on atomic wires of carbon, including their synthesis and characterization techniques and we discuss the properties and the potential interest for a wide range of technological applications. Carbon-atom wires have two possible arrangements of carbon atoms: all double bonds (i.e., cumulene) or alternate single-triple bonds (i.e., polyyne). Theory shows that cumulene is a 1-D metal while polyyne is a semiconductor. The infinite wire is a model example of a 1-D crystal showing appealing properties as predicted by computer simulations. For instance, it shows super-high thermal conductivity; a large electron mobility is expected due to the π-conjugation, and the predicted mechanical properties could make it the strongest material ever considered. In addition to these outstanding properties, in a finite system the electronic and optical properties can be tuned by controlling the wire length (i.e., number of carbon atoms) and the type of molecular termination. These findings indicate that carbon-atom wires can represent a novel nanostructure with tunable functionality. 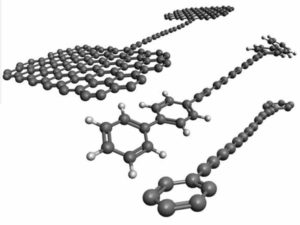 In the last few years, experimental research efforts have provided several stable systems of carbon-atom wires produced by physical or chemical methods. These approaches have proven the capability to produce wires terminated by molecular groups (e.g., phenyl groups) or by graphene (Fig. 2), including the longest stable wire (up to 44 carbon atoms) produced by rational chemical synthesis. Experimental investigations include the detailed study of the structural and vibrational properties by Raman and IR spectroscopy and, rarely, measurement of transport properties and device realization. Carbon-atom wires represent promising systems to develop functional nanomaterials and hybrid sp-sp2 and sp-sp3 architectures such as 2-D graphynes (see Fig.1). In this framework, as discussed in our review paper, there is still plenty of space for experimental and theoretical investigations to fully unveil the properties of this unique form of carbon nanostructures.