Behind the journey to spawn of European eels: expression and role of adrenergic receptors during silvering

Eels make an astonishing journey to spawn, migrating from Europe to the Sargasso Sea, near Bermuda, and back again. After spawning, larvae are transported by the Gulf Stream to the continental shelf of Europe and North Africa, where they metamorphose into glass eels that travel towards fresh, brackish and coastal waters to develop into sexually immature yellow eels. After a variable feeding period (about 5–30 years), yellow eels undergo a sexual maturation process called silvering. Silvering is a tightly controlled and complex process during which eels experience morphological, physiological and behavioral changes to pre-adapt for their ocean migrations back to the Sargasso Sea (about 6000 km).

To gain a better perspective on regulatory adjustments occurring in eels during silvering, we characterized and provided the tissue distribution of a β2 adrenergic receptor subtype in female European eels at different sexual maturation stages. Adrenergic receptors (AR) are a class of G-protein coupled receptors binding catecholamines epinephrine and norepinephrine. In fish, catecholamines are released into the circulation as a homeostatic response to stress, while in non-stress conditions modulate, among other processes, energy resource availability. Following the mammalian nomenclature, there are two main types of ARs, the α-ARs and β-ARs, and for each type several subtypes have been identified in fish, although knowledge of AR functions in fish is fragmentary and limited to few tissues, with the subtypes of α1 and β families being the most investigated (Fig. 1): α1- AR and β2-AR are involved in the control of hepatic glucose metabolism; β1- and β3-ARs regulates cardiac activity. Hormonal control over silvering is not fully elucidated, although the contribution of the adrenergic system may be postulated given the relevant metabolic changes leading eels to switch their energy sources from glycogen (yellow stage) to lipids (silver stage). 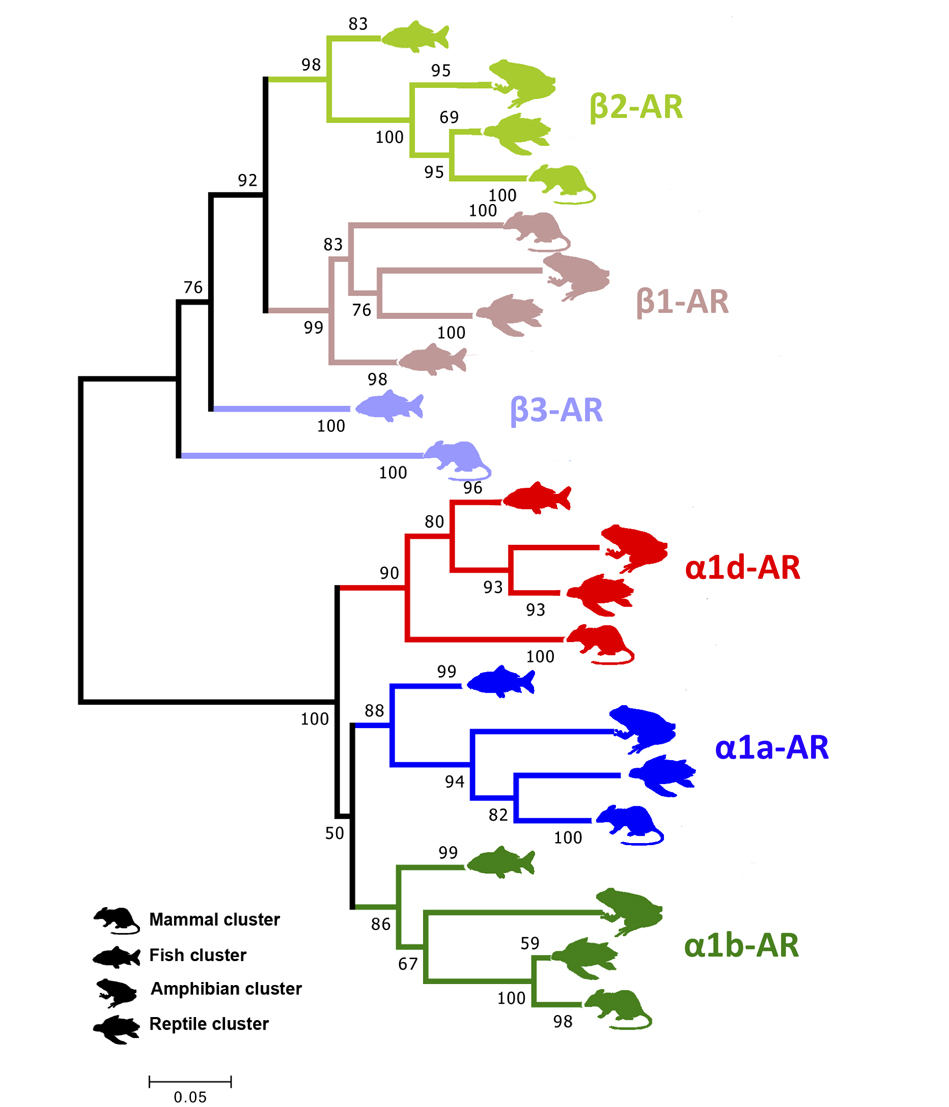 Fig. 1. Adrenergic receptors (ARs) of the α1 and β families and their phylogenetic relationships between fish, amphibian, reptiles and mammals.

We first characterized sequence of a β2-AR protein precursor in female European eels to assess the degree of its structural and functional conservation. No solved 3D structures are currently available for any fish AR, hampering the research on adrenergic regulation of fish physiology, as the pharmacological characterizations performed thus far, that used standard agonists/antagonists developed on mammals, have been not effective or of low selectivity in studies with fish models. The cloning and sequencing of the eel β2-AR showed that amino acid residues and motifs important for ligand binding are conserved, although some degree of sequence variabilities in selected domains may aid in explaining some peculiarities of fish AR interactions with pharmacological ligands and changes in G-protein affinities (Fig. 2). For example, profiles of serine/threonine phosphorylation sites in the third intracellular loop domain appear different in eels and in other fish β2-ARs compared to mammals. These residues are involved in receptor desensitization, a process which is consistent with the enhanced fish tolerance to hyperglycaemia, an adaptation to food deprivation.

The analysis of β2-AR and α1-AR mRNA expressions in different eel tissues during silvering, showed a tight regulation of these transcripts and remarkable correlations with both morphological and molecular markers of silvering progression. The main changes are observed in liver, brain and heart. On the whole, these transcriptional profiles suggested that regulation of AR expression across silvering is part of the preparatory adjustments required in selected tissues to face upcoming migration efforts (enhanced cardiac output; modulation of hepatic glucose metabolism). Behavioral modifications required to cope with changes in habitat utilization from the yellow (benthonic/trophic) to the silver (pelagic/migrating) stage are likely to be supported by neuronal rewiring occurring along silvering, as outlined by changes in AR mRNA expressions the brain. 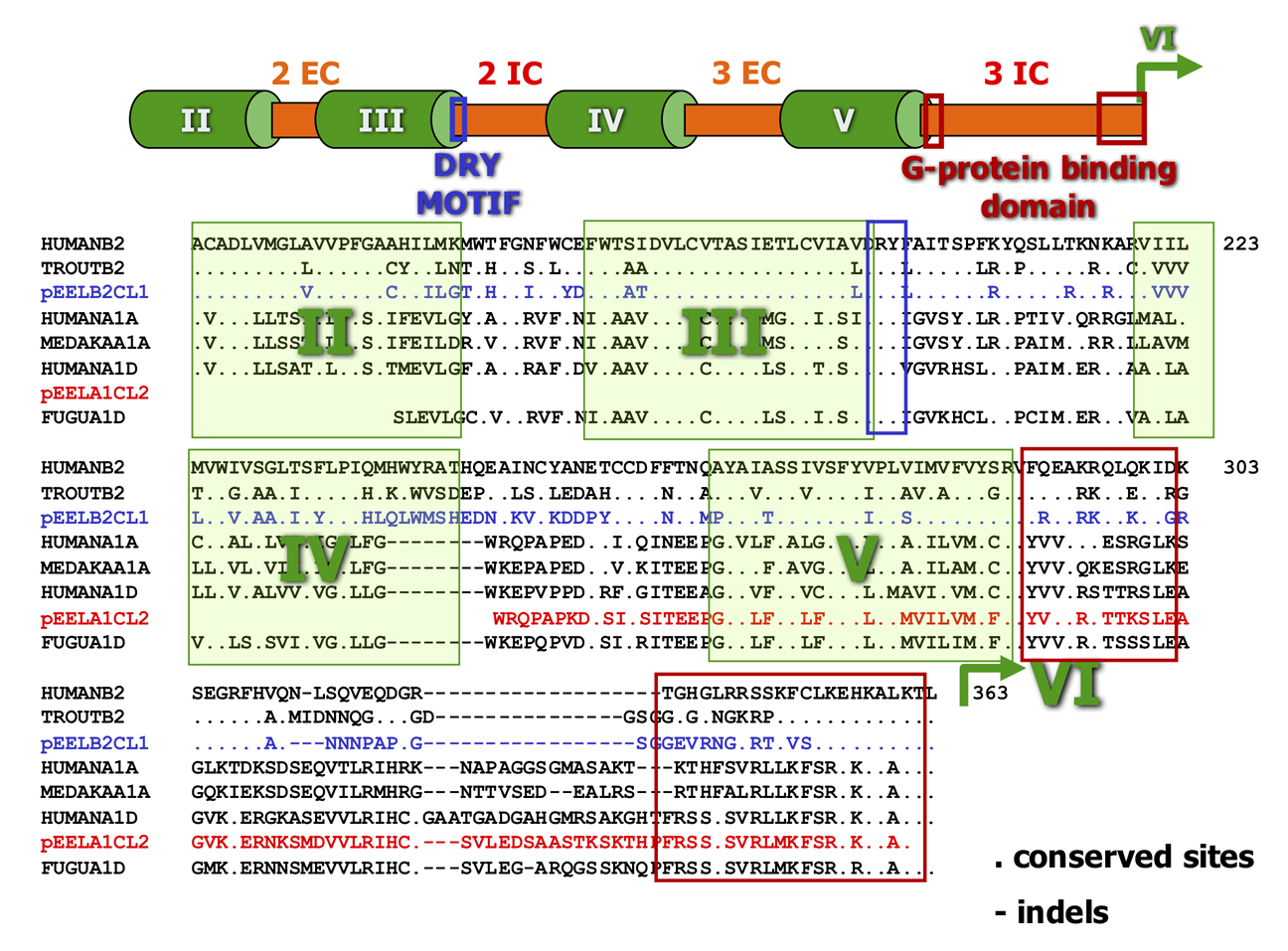 The structural conservation and tissue distribution of adrenergic receptors in eels rises concern on the potential adverse effects of waterborne pollutants targeting these G-protein coupled receptors. Environmental pollution is addressed as one of the possible causes of the dramatic European eel stock reduction. To this regard, the occurrence of β-AR antagonist chemicals (or β-blockers) in streams and coastal waters is of particular concern. β-blockers are pharmaceuticals prescribed to counteract blood hypertension and cardiac arrhythmias and specifically target the β adrenergic system. Since the freshwater eel stages are likely to be exposed to and bioaccumulate these contaminants due to peculiar ecology (benthic feeding) and physiology (high fat content), our results give new evidences on eel vulnerability towards pollutants with adrenergic activity.