Have you ever wondered how a tiny vinegar fly manages to find its way to a ripened fruit in your kitchen? As many other insects flies possess a very keen sense of smell, which allows them to detect extremely faint odors dispersed in the air. Odor molecules are detected by specialized sensory neurons in the fly antennae, the equivalent of our nose. These neurons possess sensory cilia equipped with olfactory receptors that bind specific odor molecules and convert these chemical signals into electrical activity. Insects utilize three main classes of olfactory receptors. One of them comprises the odorant receptors (ORs) which are responsible for the detection of those odors that allow flies to locate food sources, as ripened and fermenting fruits, conspecifics and to avoid perils. Such receptors can be extremely sensitive: they detect odors diluted as much as a drop of water in 20 Olympic-size swimming pools. However, the molecular basis of this remarkable ability is still elusive. 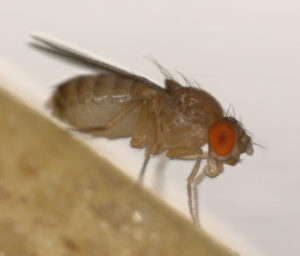 Insect ORs are composed of an ubiquitary co-receptor called Orco and a variable receptor protein OrX that binds odor molecules and determines the OR specificity. ORs are known to constitute ion channels that allow the flow of positively charged ions, including calcium ions, through the cell’s membrane. This ion flow indicates the presence of an odor. According to previous experimental evidence these receptors may also employ various strategies to amplify the cellular response to weak odor stimuli.

Intracellular signaling cascades inducing the production of so-called secondary messengers are widely used from bacteria to mammals to amplify faint extracellular signals. One of these messenger molecules – 3′,5′-cyclic adenosine monophosphate (cAMP) – was found to modulate OR activity and mutations of the cellular machinery involved in its production were found to affect the ability of olfactory neurons to detect faint odors and the ability of the fly to find odor sources. Nonetheless, up to now there was no evidence that activation of ORs with odors can induce the production of cAMP in olfactory neurons, a precondition to show that this messenger has a role in mediating insect olfaction.

To investigate it, we visualized in real time the production of cAMP in olfactory neurons of genetically modified flies expressing a specific fluorescent sensor called “Epac1-camps”. We designed a preparation to access the olfactory neurons within the fly antennae and we monitored the changes in intracellular cAMP concentration by measuring the changes in fluorescence intensity of the sensor upon binding of cAMP. We found that odor stimulations of olfactory neurons from flies bearing functional ORs induced an increase of cAMP in these cells, while the neurons of flies with mutated and non-functional ORs did not show any rise in cAMP.

As ORs are composed of Orco and an OrX, we then asked which of these two proteins was triggering the cAMP increase. Using flies bearing a mutation in a single OrX receptor called Or22a – responsible for the detection of fruity odors – we identified the OrX protein as a candidate to couple with the signaling machinery that leads to the production of cAMP. Taken together, we could provide direct evidence that ORs can induce the production of cAMP and suggest a model to explain how this is accomplished in insect olfactory neurons.

Studying insect olfaction can reveal much more information than how a fly finds a fruit. Insects provide billions of dollars’ worth in ecological services (e.g. pollination), while some species are vectors of human diseases and cause severe damage to crops. Understanding how the insect olfactory system works can help us to design more powerful and better targeted strategies to fight the baddies and protect the goodies.