Birth weight is not solely determined by genetic code 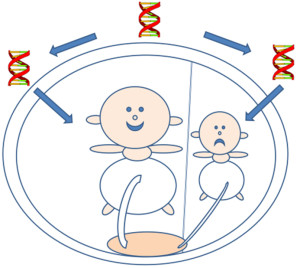 It is believed that genetic information carried by our DNA determines our metabolism and how we look. This is especially true for identical twins. The incidence of identical twins is around one in every 200 deliveries. Although we are able to identify some subtle difference between them but in general they look like photocopy to each other. However, it is not always true when they are inside of the wombs. Obstetricians occasionally experience a special situation called “twin-to-twin transfusion” with one donor twin pumps his/her blood through communicating blood vessel(s) in the placenta into the recipient co-twin. If the transfusion is severe enough then the donor may not survive. Most of them may survive but can end up with discrepancy in their birth weight (Fig. 1.).

It is believed that some growth factors modulate the growth of fetus. The most important one is the “insulin-like growth factor (IGF)”. There are two types of IGF, IGF-1 and IGF-2, for human fetal growth and at least seven 7 different types of binding proteins (IGFBP) to form a complex system to control fetal growth. Among the 7 IGFBPs, IGFBP3 may be the most important one by maintaining the circulating pool of the IGF while IGF1 is considered to be more important for fetal weight gain.  In singleton pregnancy the data clearly show birth weight is positively correlates with the blood level of IGF1. One question we asked in our study was whether the IGF1 level could explain the birth weight discrepancy in identical twins. 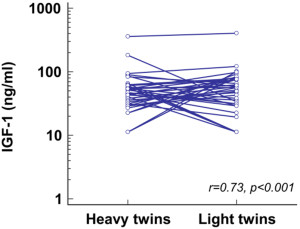 We collected cord blood with the help from our obstetricians to identify which blood belonged to which twin and quantified both IGF1 and IGFBP3. First we looked into whether the heavier twin had higher level or IGF1 or not and we did not see the difference as we expected in singletons. What we found was no difference in IGF1 levels in heavier twins as compared with the lighter twins. Actually there was a very good correlation in IGF1 between the twin pairs (Fig. 2.). The findings suggested the IGF1 levels might be determined genetically.

Our study suggests the environmental factor (nurture) might be more important than the genetic factor (nature) to determine the intrauterine weight gain. Interestingly, 19 of the original 37 twin pairs without major medical problem or prematurity-associate complication were followed until 18 months with their weight discrepancy disappeared. Apparently both genetic and environmental factors contribute to the weight gain but may have different importance during different stage of growth.