The finding of suitable biomaterials allowing the bone restoration of large bone defects is the subject of active research. Non-resorbable biomaterials such as polymers can constitute suitable scaffolds allowing the deposition of new bone. Microfibers made with a cytocompatible polymer (polystyrene) were prepared by a recently described method called electrospinning. A solution of the polymer in a suitable solvent allows the preparation of thin fibers whose diameter ranges from a micrometer to some nanometer. A high voltage power supply is applied to the solution (placed in a syringe) to induce a charge on the surface of the polymer droplet at the tip of the needle. 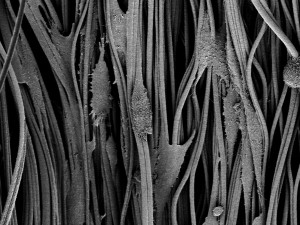 Fig. 1. Scanning electron microscopy of MC3T3 cells grown on a layer of aligned polystyrene fibers with a 2µm diameter.

When a critical voltage is reached, the droplet elongates and a solution jet is ejected to a collector. In addition, the method also allows to prepare scaffolds made of aligned or randomly disposed fibers. Aligned fibers are produced with a drum collector with a rotation of 2400 rpm while the needle remained fixed. Random fibers are produced with a plate collector and the needle is allowed to move in the x–y directions above the plate collector.

Four types of scaffolds were prepared and composed of thin or large fibers (diameter ranging from 1-4.5µm) with two dispositions: aligned or randomly disposed. The scaffolds were seeded with bone cells (MCT3-T3 osteoblast-like cells) and cultured to evaluate the adherence and the proliferation of the cells (Fig. 1). Analysis was done by nanocomputed tomography, scanning electron and confocal microscopy. Cells were found more numerous on the scaffolds made of aligned fibers of the larger diameter. These microfibers had a size and a surface roughness that mimic the collagen microfibrils present in the matrix of the bone. 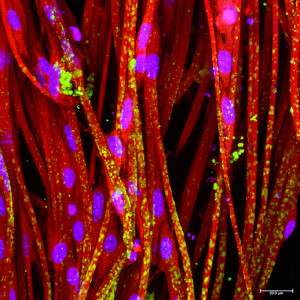 Fig. 2. Confocal microscopy of MC3T3 cells grown an aligned polystyrene fibers (stained in red by Nile Red). Nuclei in blue (stained in blue by DAPI) and calcium/phosphate deposits (stained in green by calcein)

This explains why bone cells prefer to adhere and proliferate on this synthetic substrate. Furthermore, it was also found that the distribution of the fibers also influenced the shape of the cell and the shape of their nucleus (which contains the genetic information). Microfibers of polystyrene were prepared by including traces of a fluorescent red stain, making them observable by confocal microscopy. These fibers were also cultured with MC3T3 cells. The nuclei of the cells were counterstained in blue and a green stain was used to visualize calcium/phosphate deposits that spontaneously develop on the fiber roughness. The nuclei of the bone cells were elongated, parallel to the main axis of the fibers when the cells were grown on aligned fibers (Fig. 2). On the contrary, cells grown on randomly disposed fibers presented a round nucleus. Morphometric analysis of the nucleus shape confirmed this observation. Aligned microfibers of polystyrene represent a scaffold mimicking the size and disposition of collagen fibers in bone. The influence of the shape of a substrate can influence the spreading and proliferation of a cell and also modify the shape of the cell and its nucleus.