Despite being one of the most deadly neurotoxins known to man, Botox has become a popular cosmetic treatment for reducing facial wrinkles. Originally, Botox injections were used for reducing uncontrolled movements caused by neuromuscular disorders that impaired basic everyday functions, such as manipulating small objects or walking. These functions often continue to deteriorate because of changes in muscle structure that impair force production and coordinated movements. Over the past twenty years, Botox injections have been shown to reduce uncontrolled movements, thereby improving joint function and independent living in patients following a stroke and in children with cerebral palsy. However, results of some studies have raised concerns regarding the safety of Botox injections. Specifically, repeat Botox injections have been associated with adverse effects, including muscle weakness and structural degeneration in target muscles, but more worryingly also in distant non-target muscles. These adverse effects in muscles have also been shown to affect joint function and movement control and have led to functional impairments in patients. 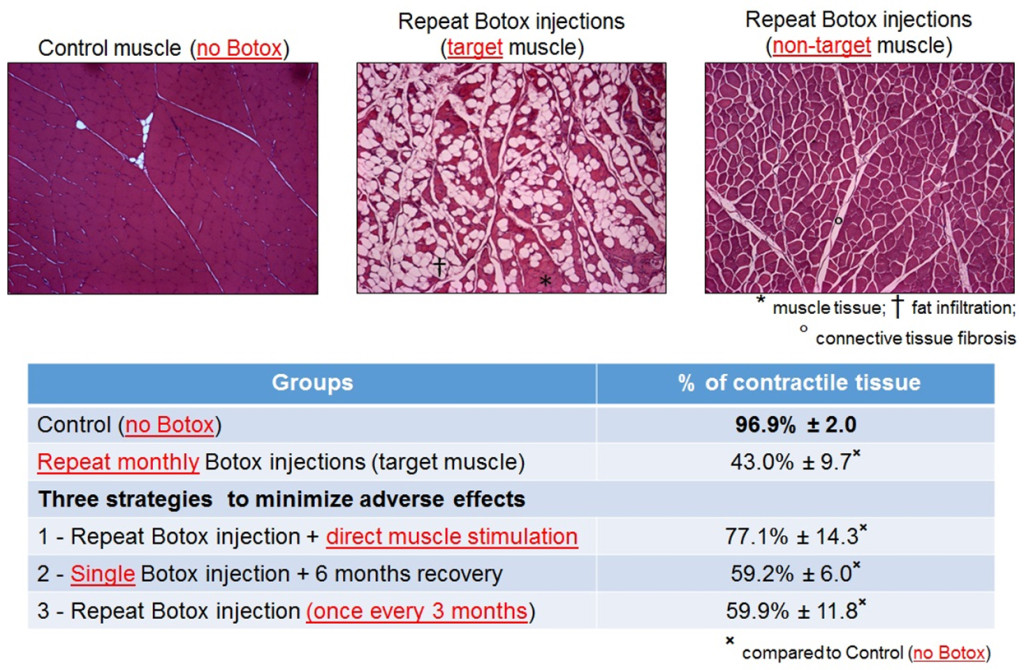 Therefore, the purpose of our last studies in this series of investigations on the effects of Botox, was to search for strategies to maximize the beneficial treatment effects of Botox while simultaneously minimizing adverse effects on muscle structure and function. First, we used direct muscle stimulation to the target muscles in the hope to prevent disuse atrophy, and assessed muscle structure and function at the end of a six month treatment protocol. Second, we minimized the treatment protocol to a single Botox injection followed by a six months recovery period. Lastly, we reduced the frequency of Botox injections from one injection per month to one injection every three months in a multiple Botox application protocol. We found that direct muscle stimulation alleviated some of the adverse effects in the target muscles, and surprisingly, fully prevented any adverse effects in non-target muscles, suggesting that direct muscle stimulation reduces the spread of Botox to non-target sites. Furthermore, we found that muscles did not fully recover from a single Botox injection despite a six month recovery period, indicating that the adverse effects of Botox persist for a long time. The target muscles were still weak and had structural degenerations including fat infiltration and increased connective tissue fibrosis. Using multiple Botox injections, either at an interval of one or three months, did not cause further weakness and degeneration of the target muscles, indicating that more aggressive or longer duration protocols can be administered to patients without increasing the adverse effects to target muscles (Fig. 1). Summarizing, we found that a single Botox injection can cause muscle weakness and initiate undesired structural changes in target muscles. However, purely from a muscular point of view, multiple injection protocols, even with an aggressive injection frequency, did not cause muscle deterioration beyond that seen for a single injection, suggesting that Botox treatment protocols can be extended over long periods than afforded by a single injection without additional penalty to muscle function.

Over the past decade, there has been a dramatic increase in the application of Botox injections for cosmetic and therapeutic conditions, and although our understanding of the detailed molecular mechanisms of how Botox works and what effects it produces is good, Botox’ long-term effects remain poorly understood. We hope that our findings encourage future clinical studies aimed at systematic evaluation of muscle structure and function during and following repeat Botox injections. Such studies may help prevent long-term adverse effects induced by Botox treatment, thereby maintaining joint function to the best degree possible, thus affording independence for patients with neuromuscular disorders, such as patients following a stroke and children with cerebral palsy.