Pathophysiology of major depressive disorder (MDD) is poorly understood, because it affects a broad range of motivational, emotional, and cognitive processes, which are difficult to disentangle. Thus, task performance differences between patients and healthy controls may relate to different levels of motivation, rather than information processing per se. The application of neuroimaging techniques in a ‘resting’ or task-free condition allows to avoid performance-related confounds and is a powerful approach to measuring the baseline brain activity (Gusnard and Raichle, 2001). The discovery of the so-called resting state networks (RSN) (Biswal et al., 1995), i.e., sets of brain regions that show a high degree of interconnectedness even in the absence of a task, is considered a landmark in the study of both healthy and diseased brain function. 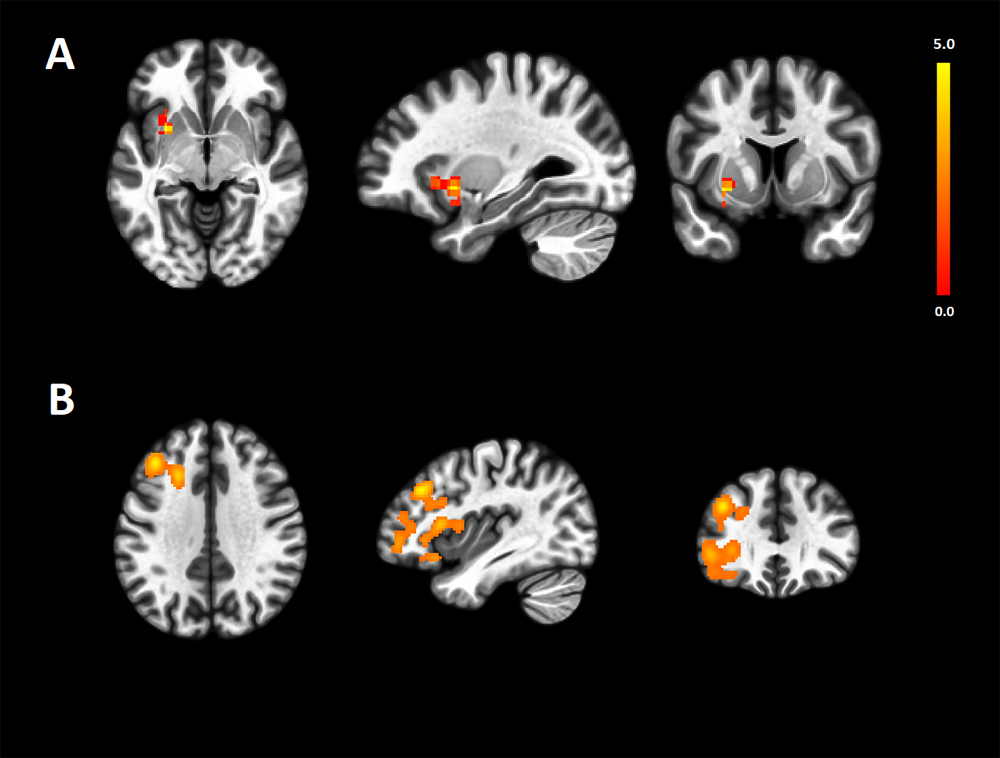 Fig. 1. Contrast patients>controls and DMN>TPN in fMRI (A) and EEG (B) data.

Most RSNs increase their activity in tasks associated with externally oriented attention and were called task-positive networks (TPNs), whereas one network shows activity decreases in most kinds of such tasks and was respectively called task-negative network (Fox et al., 2005). This latter network is usually referred to as the default mode network (DMN) and it is related to self-referential processes (Buckner et al. 2008; Raichle, 2015). Because depression is associated with a deterioration of externally oriented attention and an enhanced self-focus (Grimm et al., 2009; Watkins and Teasdale, 2004), it comes as no surprise that MDD patients show an increased connectivity within the DMN and a decreased connectivity in TPNs (Hamilton et al., 2011, 2013; Marchetti et al., 2012). Cortical localization of this ‘dominance’ of the DMN over the TPN in MDD patients is not fully understood. Besides, this effect has been investigated using fMRI, whose relation to neuronal events is still a matter of debate (e.g., Debener et al., 2006). A confirmation of these phenomenon based on electrophysiological data would greatly increase our confidence in its neural origin and would potentially allow to study it using much cheaper equipment. In this study, we tested the dominance hypothesis using seed-based connectivity analysis of resting-state fMRI and EEG data obtained in MDD patients and healthy controls. EEG data were analyzed using a combination of beamformer spatial filtering with seed-based connectivity estimation (Brookes et al., 2011; De Pasquale et al., 2010; Hipp et al., 2012). In MDD patients, as compared to controls, left insula, pallidum/putamen, amygdala, and left dorso- and ventrolateral prefrontal cortex were more strongly connected with DMN than with TPN seeds (Fig. 1). In EEG, all significant effects were obtained in the delta frequency band, in line with the hypothesis linking these oscillations with motivational processes and pathological conditions (Knyazev, 2012). Thus, both fMRI and EEG data show that in MDD patients, major emotion and attention regulation circuits are more strongly connected with DMN than with TPN implying they are more prepared to respond to internally generated self-related thoughts than to environmental challenges. Both fMRI and EEG data point to the left prefrontal cortex broadly defined as the site, which in depressed individuals is stronger connected with the DMN than with the TPN. It is well known that left prefrontal cortex damage leads to hedonic deficits and increases depressive symptoms (Davidson, 2001). It could be speculated that these left-sided brain areas are normally under the control of TPN and are easily activated by environmental stimuli, but in depressed individuals preoccupied with self-focused rumination they fall under control of the DMN and are not able anymore to respond adequately to environmental cues.