CAD/CAM technology made great strides within the last 15 years. Not only software and hardware of the computers, but also the integration in milling machines drives manufacturers to provide continuously improved systems to the market. These fabrication technology for dental prostheses allows the usage of very hard in stiff materials such as nonprecious alloy and zirconia ceramic (known from the brakes of Formula One cars). Within the penetration of the market the prices dropped down for both materials and technology. Thus, also new and cheap materials were developed. One of these materials is a reinforced acrylic resin called VITA CADTemp. As the name indicates this material is for temporary use. Normally temporaries are inserted in a time span of about four weeks during a prosthodontic treatment (provision with crowns or bridges to replace missing teeth). Sometimes it is necessary to bridge a time of about six to twelve months. Reasons might be 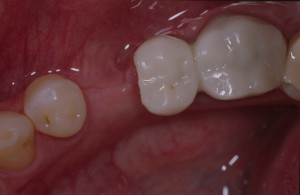 Fig. 1. a fracture site of a cantilever pontic. The pontic was lost and the two retainers (right) of the former “cantilever bridge” are funtioning now as “blocked crowns”. These fractures appear around half a year in service.

In such cases a so-called “long-term temporary” restoration is inserted. Due to the fact that the normally used nonprecious alloy which is veneered with tooth-coloured resin is still quite expensive, a reinforced tooth coloured acrylic resin made with CAD/CAM could be a promising alternative.

It is known, that the daily forces (biting, clenching) and physically/chemically changes (hot tea, cold ice, saliva, coffee, coke) in the oral cavity alters the stability of dental materials.

That’s why a clinical trial was run to evaluate the performance of fixed dental prosthesis (FDPs = bridges) made from VITA CAD-Temp.

27 patients were provided with 37 terminal-retained and 8 cantilevered FDPs. These patients needed the replacement of one or two teeth with one FDP in a compromised (inferior prognosis for remaining teeth) dentition. The patients were followed be in the early for 2 to 26 months. Within this period of time 9 out of 45 restorations experienced complication. 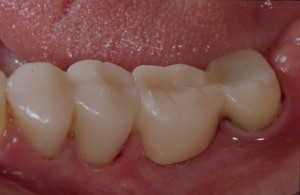 Fig. 2. a terminal retained 4-unit bridge after one year in service. The molar (pontic) shows some chewing gum remains on the top surface.

On the one hand it was found, that cantilevered FDPs failed very early (after 2-8 months) – the replaced cantilevered tooth-pontic fractured (see Figure 1).

On the other hand was also found, that terminal retained bridges performed out well. 100% were in service after one year (see Figure 2). The most frequent problem was a loss of retention (bridge loosens) which could be fixed by the dentist with fresh insertion.

It could be identified that tooth loosening, long spans and cantilever design led to early failure. Furthermore patients reported that sticky food as well as some kinds of chewing gum stick to the material. However, the material allows an aesthetic restoration which is secure for at least one year, if the identified risks are taken into account by the dentist for treatment decision.

Fabian Huettig
Ass.Med.Dir. at Department of Prosthodontics / University Hospital Tuebingen, Germany
and Head of the Study Coordination Office “Medical Devices” at
the Centre for Dentistry, Oral Medicine, and Maxillofacial Surgery