Some of the most advanced and modern medicines, such as those used in the treatment of cancer rely heavily on their selective, high affinity targeting of cancerous cells in order to be effective medicine. However, some drugs in the human body are quickly broken down by enzymes in the blood or excreted by the kidneys. A good example of these rapidly eliminated drugs are ‘peptides’ which can be considered as medium-sized drug molecules. One methodology to circumvent these issues involves linking the peptide drug molecule(s) to large protein-based drugs called antibodies, which themselves facilitate specific targeting in the body. However, the main drawbacks of this approach of linking peptides with antibodies are (i) the loss in potency of the peptide drug when attached to a large antibody and (ii) the complexity of chemically modifying the antibodies in order to link (conjugate) to the desired peptide. 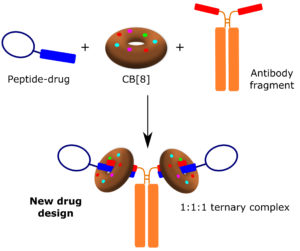 The application of a host-guest chemistry approach, in which a hollow compound (host) binds one or more molecules (guests) with high affinity but in a dynamic/transient fashion, allows to obtain antibody-drugs conjugates which are connected, but not permanently linked. This method permits the antibodies to bring the medicines at their target, insuring specificity and stability within the body; a convenient stimuli (dilution, pH, temperature) can then prompt the release of the drugs, thus retaining their efficacy.

In our article, Selective, Non-Covalent Conjugation of Synthetic Peptides with Recombinant Proteins Mediated by Host-Guest Chemistry, we exploited a host-guest chemistry approach using the host molecule cucurbit[8]uril (CB[8]), a doughnut shaped molecule, to bring together a drug compound (a derivative of the RGD peptide, a cancer relevant sequence) and an antibody fragment. The peculiar features of CB[8], such as the high affinity for specific hydrophobic amino acids, the ability of binding two guests in its wide cavity at the same time and its low toxicity, allowed us to obtain a system composed by a ternary complex peptide:CB[8]:antibody in a 1:1:1 ratio.

The short peptide sequence was simply chemically modified to be suited as CB[8] guest by adding a small moiety that is known to display high binding for the doughnut shaped molecule; whereas the antibody was only modified via a standard protein engineering approach, with no further need for harsh chemical modifications.

We applied several analytical techniques to prove the stability and specificity of the host-guest ternary complex, thus setting the first step towards the use of this delivery methodology in vivo.

We are confident in the transformative potential of our approach in drug design and development, offering increased freedom to the linking strategy between drug molecules and antibodies in order to impart advantages regarding potency, stability and targeted delivery.