Can hypertension and related cardiovascular diseases be caused by Dark-Matter-like RNAs?

Hypertension is a common but one of the most important health problems, because it is a major risk factor for many cardiovascular diseases. Hypertension is a multi-factorial disease involving complex interplay of genetic and environmental factors. To treat hypertension and its complications, vigorous studies into mechanisms of hypertension have been made to date. And most of these studies were about protein interactions, protein synthesis from ‘genes’, abnormal protein production by genetic mutations, and other mechanisms focused on protein. But it has been recognized from early days that only 1.5% of human genome is coding proteins, and other non-protein-coding DNA sequences of DNAs were considered as “junk” for a long time. But recently, large part of these non-protein-coding DNA sequences has turned out to be transcripted into non-coding RNAs (ncRNAs) that regulate the protein synthesis from ‘genes’ by various mechanisms (Fig. 1.) and playing important roles in maintaining life. In addition, it has also recently become evident that these ncRNAs without translated into proteins are overwhelming messenger RNAs (from protein-coding DNA sequences of DNAs) in quantity and quality. 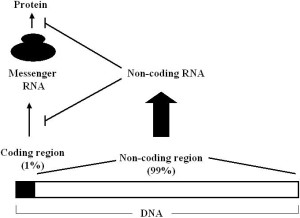 Recent studies report that RNAs are transcripted from 75% of the total human genome. These unnoticed ncRNAs in overwhelming quantity are referred to the “Dark Matter” of the genome. And they are also playing an important role in quantity and quality in regulating many gene expressions as a fine tuner. These ncRNAs has been reported to have impact on various human diseases such as cancer, cardiovascular diseases, hypertension or its target organ damages. And their potential of becoming a tool of identifying cardiovascular risk or novel therapeutic method in the near future is expected.

Non-coding RNAs can be classified into three types according to their size; small, intermediate and long (Fig. 2.). Conventionally ncRNAs other than long ncRNAs are considered small ncRNAs. As to the relationship with human diseases, micro RNAs (miRNAs), a member of a small ncRNAs, are most extensively studied at present. But long non-coding RNAs (lncRNAs) are gaining more interest.

It is considered that about 2000 human miRNAs exist and control over 1/3 of entire genes including development, differetiation, cell growth, neoplastic transformation and so on. Micro RNAs are produced from non-protein coding regions of genome. And mature miRNA binds to the target messenger RNA and blocks target gene expression of producing proteins. Micro RNAs are reported to participate in the progression of complications of hypertension such as atherosclerosis, acute myocardial infarction, cardiac hypertrophy or fibrosis, heart failure, atrial fibrillation, stroke, intracranial aneurysm, aortic aneurysm, PAD, renal dysfunction, and metabolic syndrome. Abnormal miRNAs expression or function can also cause hypertension by modulating renin-angiotensin-aldosteron system, adrenal functions, vascular endothelial or smooth muscle functions, or renal function. Even relationship between hypertension and cytomegalovirus infection via miRNAs are also reported. Interestingly, communication between distant cells by miRNAs in the systemic blood circulation has been found. Possibility of treatment of hypertension by miRNA mimicks is under investigation. 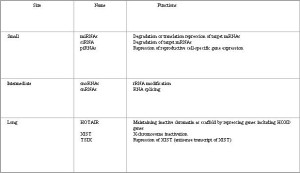 Reports on lncRNAs that studied the relation with hypertension is scarce at present, but explosive increase of interest in that field can be expected. Different expression of lncRNAs between different rat hypertension models, and relationship between lncRNAs and vascular smooth muscle proliferation, vascular endothelial function, steroid receptors function, inflammation, or prognosis and associated hypertension in patients of myocardial infarction are reported.

We are just beginning to study the new frontier of the role of ncRNAs, especially lncRNAs, in hypertension pathogenesis, and unknown mechanism can be added in the near future. Thus ncRNAs may represent new and promising biomarkers and therapeutic targets in diagnosing, treating and preventing hypertension and its complications.

Non-coding RNAs and hypertension-unveiling unexpected mechanisms of hypertension by the dark matter of the genome.
Murakami K.
Curr Hypertens Rev. 2015