Sight threatening pathologies of the eye retina, the light sensitive tissue lining the back of the eye, are an increasing health concern in the ageing population. A number of risk factors, including high intraocular pressure, high blood sugar, high blood pressure, sex, race and ocular anatomical features, are recognized to be potential triggers of these diseases. Whilst targeted therapies are available, it remains, however, a significant fraction of patients who do not benefit from the treatments or experience a slower but continuous progression of the disease. 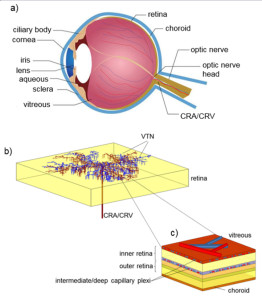 In our work, we have focused our attention on the effects of altered blood circulation in the retina, a risk factor which has surfaced as an important element in the pathologies of the eye fundus. The biophysical phenomena governing retinal blood flow and oxygen delivery to the neural tissue are numerous and difficult to evaluate. Space is thus open to new approaches and contributions. In these perspectives, we propose the use of mathematical concepts and computer simulations as virtual tools to theoretically investigate and single out the relative importance of different microcirculatory parameters and their alteration, which role is intermingled in the practice.

The concept of the model is depicted in Figure 1. Its novelty is in the attempt of keeping into account the three-dimensional configuration of the retinal tissue with its embedded system of microcirculation. The arteriolar and venular networks laying in the upfront retinal layer are mathematically represented by fractal structures which mimic the anatomical characteristics of geometry and spatial density. The huge number of capillaries prevents from using the same descriptions and prompts for adopting a reduced modeling approach based on the analogy of vascular networks with electrical circuits. Blood velocity and pressure are computed by solving on a computer the classical Navier-Stokes equations for fluid-dynamics, formulated under justified simplified assumptions so to make affordable the time of computation. The computed blood velocity field is then used to transport oxygen along the vascular network. In this process, oxygen is also delivered across the vascular walls according to tissue metabolic demands.

Fig. 2. Sensitivity analysis. Relative variation of the quantities reported on the rows as a function of the percentage variation of the parameters in the columns. The sign of the values indicates whether the variable decreases (-) or increases (+) with respect to the reference value. The color scale white-yellow-red used in the table visually grades the influence of individual parameter variations on the model outputs (white=small, red=large variations).

A first validation phase has guaranteed the correctness of the model and its computer implementation by comparing simulated blood velocity and oxygen levels in the vessels and in the tissue with data from experimental and theoretical studies in the literature. In a second phase, the mathematical model has been used to investigate the sensitivity of different quantities of relevant biophysical interest to variations of parameters, which can be altered in pathological conditions (see Fig.2). Focusing here for brevity only on oxygen levels in the retinal ganglion cells, the neural cells from which the visual information leaves the eye to reach the brain, our in silico analysis shows that systemic (inlet) arterial blood pressure, plasma viscosity and tissue metabolic consumption rates have the strongest influence. This finding, which stems from an exploration of a large range of parameter variations at no cost of animal/human experiments, can be employed to devise new therapeutic options for patients in whom these conditions are critically out of normal baseline values.