Pharmacogenetics testing is relatively new to the field of psychiatry having been introduced only within recent years and at an affordable cost in the clinical setting. The case history illustrated in this report describes how pharmacogenetics testing was used to help explain the clinical course of a 16-year-old male patient. His psychiatric treatment responses were then used to guide his care leading to marked improvement.

The patient had been previously diagnosed with attention deficit hyperactivity disorder, anxiety disorder, obsessive compulsive disorder, sensory integration disorder, and mild autism spectrum disorder and he displayed symptoms of these disorders for most of his life. The patient was prescribed many psychiatric medications in the past including divalproex, clonidine, guanfacine, sertraline, lisdexamfetamine, oxcarbazepine, lamotrigine, fluvoxamine, risperidone, atomoxetine, dextroamphetamine, aripiprazole, fluoxetine, quetiapine, imipramine, alprazolam and citalopram in addition to over the counter supplements. He experienced adverse reactions to several medications and others proved to be ineffective for controlling his symptoms. 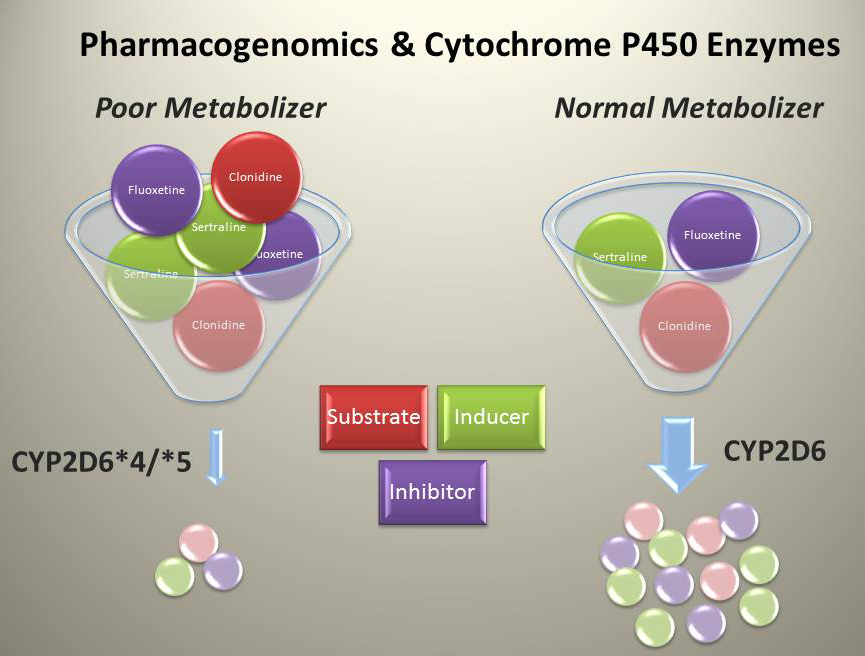 Psychotherapies, occupational therapy and hypnotherapy were utilized with only marginal positive effects. The patient felt hopeless and did not understand why the treatments were not helping. He displayed emotion dysregulation, severe tactile sensitivity and anxiety attacks. He struggled to wear street clothing for any length of time due to extreme sensitivity to sensory stimulation. Pharmacogenetics testing was suggested to inform psychiatrists about genetic factors underlying the patient’s metabolism of drugs and responses to medications.  Pharmacogenetics testing uses the patient’s DNA to estimate the effects of drugs and the efficiency of drug metabolism whether individuals exhibit normal, fast, or slow metabolism of specific drugs at the liver enzyme level.

The patient was prescribed escitalopram (5 mg) and immediately endorsed less anxiety, showed improved sensory tolerance and he was finally able to utilize coping skills that he had learned in therapy. Pharmacogenetics testing was completed and he was found to have three known variations in the 10 genes tested. One variation affected signaling in the brain related to eating behavior, one related to increased risk for depression, and the third showed a significantly reduced (slow) ability to metabolize a long list of psychiatric medications by the liver enzyme system including many that the patient had taken in the past. Some of the medications he had taken were inhibitors of these enzymes which are known to further reduce drug metabolism. Thus, genetic variation increased the patient’s risk of having drug interactions, side effects and reduced effectiveness when taking certain drugs.  It was discovered through his pharmacogenetics testing that the ability of this patient to metabolize escitalopram was normal. Escitalopram was therefore increased in dosage to 10mg and improvement was quite notable. The patient was able to wear street clothes, was less anxious and more social, and displayed better emotion regulation. He was able to apply for employment, successfully obtain a job and has since been promoted. Escitalopram was later increased to 20 mg and he has continued to improve in all areas of previous concerns and has discontinued psychotherapy altogether.

In summary, the patient profiled in this report had been prescribed many medications in the past that could not be metabolized normally, given his genetic pattern. Pharmacogenetics testing helped to identify escitalopram, an antidepressant metabolized by a mechanism that functions normally, leading to improved clinical response, function and quality of life for this patient. This article supplies first hand evidence of the value of personalized medicine with pharmacogenetics testing which should be considered as the standard of care in cases of poor clinical response or adverse reactions to multiple psychiatric medications. Pharmacogenetics testing can help to guide appropriate and improved psychiatric treatment in children and adults seeking psychiatric services.