Can reports of a homicide committed by a person with schizophrenia change public opinion about them?

Schizophrenia is a neurological disorder in which a combination of hallucinations and delusions lead the person to interpret reality abnormally. On May 29th 2009, a patient diagnosed with schizophrenia killed a 4-year old boy and injured his father. News reports identified the person as a madman, including images of the crime scene and weapon itself. Although past studies suggest a link between the media portrayal of mentally unstable patients committing violence and increased stigma exists, such studies often involve small sample sizes, restricted methodologies and rarely reflect upon the actual stigma regarding mental illnesses. We therefore investigated the effect of media reporting of a homicide committed by a man with schizophrenia on the knowledge and stigma of psychosis. 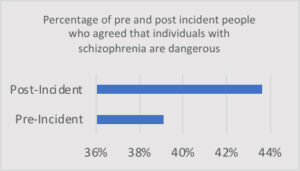 Fig. 1. Comparison of opinions from the pre-incident and post-incident survey in perception of the dangerousness of people with schizophrenia.

We completed a pre-incident and post-incident survey, examining 1016 and 506 participants respectively. The LPDDS scores between the pre and post incident surveys remained similar with scores of 2.64 and 2.63 respectively, suggesting no overall change in stigma was detected. However, after the homicide occurred, more participants in the post-incident survey perceived people with psychosis as more dangerous than a normal human being. Before the homicide, only 39.1% of participants believed that people with psychosis are dangerous. However, after the incident, the percentage increased to 43.6%. Additionally, 49.1% participants reported to feel extremely distressed by the incident. Those troubled were more likely to agree that people with psychosis are dangerous, even though there was no significant difference in stigmatic beliefs between those who felt distressed and those who did not. In comparison to not distressed individuals, 11% more distressed people associated dangerousness with mental illnesses. From the results, it was also evident that female and older participants felt more worry.

The unchanged stigmatic views may be because the word psychosis was used in the survey and schizophrenia was used in news reports, suggesting perceptions of psychosis is minimally affected by media reporting on schizophrenia. The Chinese translation of Psychosis was established in 2001 and this might possess a lower level of public stigma than the older Chinese term of schizophrenia. Furthermore, the public stigma about mental illnesses is a complex phenomenon and mechanism of its formation is likely to be multiple, thus more resistant to change as a whole. Opinions of the public, however, can be changed by a single event like the homicide. As believing patients are dangerous is one of the key stereotypes of public’s view about patients with psychosis and key components of public stigma. Cumulative negative views about patients may finally affect the public stigma. Our findings call for the need of public policies and media monitoring’s such as the use of factual language and inclusion of mental health education.

The effect of media reporting of a homicide committed by a patient with schizophrenia on the public stigma and knowledge of psychosis among the general population of Hong Kong
Chan S.K.W, Li O.W, Hui C.L.M, Chan W.C, Lee E.H.M, Chen E.Y.H
Soc Psychiatry Psychiatr Epidemiol. 2019 Jan